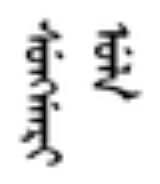 Overview
The Songhua or Sunggari River (Manchu language
Manchu language
Manchu is a Tungusic endangered language spoken in Northeast China; it used to be the language of the Manchu, though now most Manchus speak Mandarin Chinese and there are fewer than 70 native speakers of Manchu out of a total of nearly 10 million ethnic Manchus...
: , Sunggari Ula; ; ) is a river
River
A river is a natural watercourse, usually freshwater, flowing towards an ocean, a lake, a sea, or another river. In a few cases, a river simply flows into the ground or dries up completely before reaching another body of water. Small rivers may also be called by several other names, including...
in Northeast China
Northeast China
Northeast China, historically known in English as Manchuria, is a geographical region of China, consisting of the three provinces of Liaoning, Jilin and Heilongjiang. The region is sometimes called the Three Northeast Provinces...
, and is the largest tributary
Tributary
A tributary or affluent is a stream or river that flows into a main stem river or a lake. A tributary does not flow directly into a sea or ocean...
of the Heilong River (Amur), flowing about 1434 kilometres (891 mi) from Changbai Mountains
Changbai Mountains
The Changbai Mountain Range or Jangbaek Mountain Range are a mountain range on the border between China and North Korea...
through Jilin
Jilin
Jilin , is a province of the People's Republic of China located in the northeastern part of the country. Jilin borders North Korea and Russia to the east, Heilongjiang to the north, Liaoning to the south, and Inner Mongolia to the west...
and Heilongjiang
Heilongjiang
For the river known in Mandarin as Heilong Jiang, see Amur River' is a province of the People's Republic of China located in the northeastern part of the country. "Heilongjiang" literally means Black Dragon River, which is the Chinese name for the Amur. The one-character abbreviation is 黑...
provinces. The river drains 557180 square miles (1,443,089.6 km²) of land, and has an annual discharge of 2463 m3/s.

As the Second Songhua River
Second Songhua River
The Second Songua River is a tributary of the Songhua River in Jilin Province, China. The river meets the Songhua and Nen Rivers near Songyuan and has several tributaries to include the First Dao, the Second Dao, Huifa, Yinma, Yitong and Lafa Rivers. It is interrupted by the Baishan, Hongshi and...
, it joins the Amur at the town of Dongjiang
Tongjiang
Tongjiang is a city of 160,000 in eastern Heilongjiang province, People's Republic of China, located at the confluence and on the right banks of the Songhua and Amur Rivers, the latter which marks the border with Russia...
. It is then interrupted by the Baishan
Baishan Dam
The Baishan Dam is an arch-gravity dam on the Second Songhua River near the town of Baishanzhen, Huadian, Jilin Province, China. The purpose of the dam is hydroelectric power generation and flood control...
, Hongshi and Fengman Dam
Fengman Dam
The Fengman Dam is a concrete gravity dam from Jilin City on the Second Songhua River in Jilin Province, China. The main purposes of the dam are hydroelectric power generation and flood control. Construction of the dam began in 1937 and was complete in 1953...
s, which are used for hydroelectricity
Hydroelectricity
Hydroelectricity is the term referring to electricity generated by hydropower; the production of electrical power through the use of the gravitational force of falling or flowing water. It is the most widely used form of renewable energy...
production.