Encyclopedia
National Taxpayers Union (NTU) is a taxpayers advocacy organization and taxpayers union
Taxpayer groups
Taxpayer groups, also known as taxpayers union, are formal nonprofit or informal advocacy groups that promote lower taxation, reductions in government spending, and limits to government debt. Many United States cities and countries have taxpayer groups...
in the United States
United States
The United States of America is a federal constitutional republic comprising fifty states and a federal district...
, founded in 1969 by James Dale Davidson
James Dale Davidson
James Dale Davidson is an American investment newsletter writer and author of The Sovereign Individual, The Great Reckoning, and Blood in the Streets, all three co-authored with William Rees-Mogg. He also wrote The Plague of the Black Debt - How to Survive the Coming Depression. He is also the...
. NTU advertises that it is the largest and oldest grassroots taxpayer organization in the nation, with 362,000 members nationwide. It is closely affiliated with a non-profit foundation, the National Taxpayers Union Foundation (NTUF). According to the Form 990 returns
Tax forms in the United States
IRS tax forms are used for taxpayers and tax-exempt organizations to report financial information to the Internal Revenue Service of the United States. They are used to report income, calculate taxes to be paid to the federal government of the United States, and disclose other information as...
of NTUF, the NTU and NTUF share staff, facilities, website and board members.

The NTU favors either a Flat Tax
Flat tax
A flat tax is a tax system with a constant marginal tax rate. Typically the term flat tax is applied in the context of an individual or corporate income that will be taxed at one marginal rate...
or the FairTax
FairTax
The FairTax is a tax reform proposal for the federal government of the United States that would replace all federal taxes on personal and corporate income with a single broad national consumption tax on retail sales. The Fair Tax Act would apply a tax once at the point of purchase on all new goods...
(a national sales tax with rebate) for the United States, as opposed to the current income tax system now in use
Income tax in the United States
In the United States, a tax is imposed on income by the Federal, most states, and many local governments. The income tax is determined by applying a tax rate, which may increase as income increases, to taxable income as defined. Individuals and corporations are directly taxable, and estates and...
. The organization argues in favor of the line-item veto
Line-item veto
In United States government, the line-item veto, or partial veto, is the power of an executive authority to nullify or cancel specific provisions of a bill, usually a budget appropriations bill, without vetoing the entire legislative package...
for the president.
NTU generally opposes crop subsidies by the government (such as for sugar and ethanol). The organization's briefs and policy papers decry the "death tax," (a tax on estates
Estate tax in the United States
The estate tax in the United States is a tax imposed on the transfer of the "taxable estate" of a deceased person, whether such property is transferred via a will, according to the state laws of intestacy or otherwise made as an incident of the death of the owner, such as a transfer of property...
) and supports deregulation
Deregulation
Deregulation is the removal or simplification of government rules and regulations that constrain the operation of market forces.Deregulation is the removal or simplification of government rules and regulations that constrain the operation of market forces.Deregulation is the removal or...
. NTU also provides information on "Congressional & Executive Pay/Perks" (e.g., NTU estimates the public pensions payments for Members of Congress), and NTU has called for reforms to deny a publicly-funded pension to Members of Congress convicted of a felony.

Government Spending Transparency - The National Taxpayers Union has been a proponent of the "Google Government" movement. More specifically, the organization calls for the creation of searchable Internet databases that provide information on state government grant and contract expenditures.

NTU is a founding sponsor of www.ShowMeTheSpending.org http://www.showmethespending.org/Home_Page.html, a website dedicated to online government spending transparency.

NTU Rates Congress - NTU rates U.S. Representatives and Senators on their congressional votes. NTU Rates Congress includes "every vote that significantly affects taxes, spending, debt, and regulatory burdens on consumers and taxpayers." NTU then assigns weights to the votes, reflecting the importance of each vote's effect on federal spending, when calculating each officials score.

A grade of "A" indicates the organization views the member as a strong supporter of responsible tax and spending policies. The organization gives these members of Congress the "Taxpayers' Friend Award." 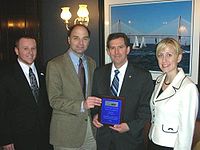 Research - NTU writes policy papers on many subjects they view as important to the taxpayer. The organization also sends issue briefs to its members throughout the country outlining topics and issues that might be of interest to them.

NoTaxHikers.org – NTU launched www.NoTaxHikers.org http://notaxhikers.org/ in fall 2008. The site asks visitors to pledge to not to vote for tax hikers.

In 1970, Davidson hired A. Earnest Fitzgerald, a United States Air Force
United States Air Force
The United States Air Force is the aerial warfare service branch of the United States Armed Forces and one of the American uniformed services. Initially part of the United States Army, the USAF was formed as a separate branch of the military on September 18, 1947 under the National Security Act of...
analyst, as the president of NTU. In 1978, Grover Norquist
Grover Norquist
Grover Glenn Norquist is an American lobbyist, conservative activist, and founder and president of Americans for Tax Reform...
, was named executive director; after his departure in 1982, he was replaced by former Maryland State Senate Majority Leader George Snyder
George Snyder
George Elmer Snyder was the Maryland State Senate majority leader from 1971-1974.He graduated from the University of Maryland and attended the University of Maryland School of Law. He is married to Karen Englehart Snyder and has six children and ten grandchildren...
.

Duane Parde was named president of the organization following the death of Berthoud.