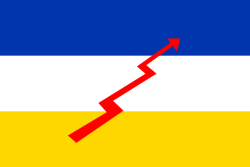 Movimiento Nacional Socialista de Chile was a political movement in Chile
Chile
Chile ,officially the Republic of Chile , is a country in South America occupying a long, narrow coastal strip between the Andes mountains to the east and the Pacific Ocean to the west. It borders Peru to the north, Bolivia to the northeast, Argentina to the east, and the Drake Passage in the far...
, during the Presidential Republic Era, which initially supported the ideas of Adolf Hitler
Adolf Hitler
Adolf Hitler was an Austrian-born German politician and the leader of the National Socialist German Workers Party , commonly referred to as the Nazi Party). He was Chancellor of Germany from 1933 to 1945, and head of state from 1934 to 1945...
, although it later moved towards a more indigenous form of fascism
Fascism
Fascism is a radical authoritarian nationalist political ideology. Fascists seek to rejuvenate their nation based on commitment to the national community as an organic entity, in which individuals are bound together in national identity by suprapersonal connections of ancestry, culture, and blood...
.

The movement was formed in April 1932 General Diaz Valderrama, Carlos Keller
Carlos Keller
Carlos Keller Rueff was a far-right Chilean writer, historian, and political figure.-Early years:Keller was born in Concepción, Chile, into a family of German origin and completed his education at universities in Germany...
(the main ideologue of the group) and Jorge González von Marées
Jorge González von Marées
Jorge González von Marées El Jefe was a Chilean political figure and author.Born in Santiago of a German mother. He was ideologically influenced by Oswald Spengler...
, who became leader. The party initially followed the ideas of Nazism
Nazism
Nazism, the common short form name of National Socialism was the ideology and practice of the Nazi Party and of Nazi Germany...
closely, stressing anti-Semitism
Anti-Semitism
Antisemitism is suspicion of, hatred toward, or discrimination against Jews for reasons connected to their Jewish heritage. According to a 2005 U.S...
. It received financial support from the German
Germans
The Germans are a Germanic ethnic group native to Central Europe. The English term Germans has referred to the German-speaking population of the Holy Roman Empire since the Late Middle Ages....
population of Chile and soon built up a membership of 20,000 people. The movement stressed what it saw as the need for one party rule
Single-party state
A single-party state, one-party system or single-party system is a type of party system government in which a single political party forms the government and no other parties are permitted to run candidates for election...
, corporatism
Corporatism
Corporatism, also known as corporativism, is a system of economic, political, or social organization that involves association of the people of society into corporate groups, such as agricultural, business, ethnic, labor, military, patronage, or scientific affiliations, on the basis of common...
and solidarity between classes, and soon set up its own paramilitary wing, the Tropas Nacistas de Asalto.

However support for Hitler was later abandoned, with González von Marées claiming by the late 1930s that the use of the name 'national socialist' had been an error on his part. Anti-semitism was also scaled back, with a more domestic form of fascism being offered instead. Individual members (most notably, Miguel Serrano
Miguel Serrano
Miguel Serrano was a Chilean diplomat, explorer and author of poetry, books on spiritual questing and Esoteric Nazism...
) continued to look to Adolf Hitler
Adolf Hitler
Adolf Hitler was an Austrian-born German politician and the leader of the National Socialist German Workers Party , commonly referred to as the Nazi Party). He was Chancellor of Germany from 1933 to 1945, and head of state from 1934 to 1945...
.

The party obtained three deputies (3,5% of the votes) during the 1937 legislative elections . It then merged in 1938 with the Unión Socialista (Socialist Union) to create the Alianza Popular Libertadora (APL) which supported General Carlos Ibáñez del Campo
Carlos Ibáñez del Campo
General Carlos Ibáñez del Campo was a Chilean Army officer and political figure. He served as dictator between 1927 and 1931 and as constitutional President from 1952 to 1958.- The coups of 1924 and 1925 :...
's candidacy for the 1938 presidential election
Chilean presidential election, 1938
A presidential election was held in Chile on October 25, 1938.-Results:* Withdrew candidacy before election and gave his support to Aguirre.Source:...
. However, fascist elements attempted a coup in September 1938, which was ruthlessly put down at the Seguro Obrero massacre, and led Ibáñez to oppose the National Socialists' choice of Gustavo Ross, leading to indirect support of the Radical Party
Radical Party (Chile)
The Radical Party of Chile was a Chilean political party. It was formed in 1863 by a split in the Liberal Party. Not coincidently, it was formed shortly after the organization of the Grand Lodge of Chile, and it has maintained a close relationship with Chilean Freemasonry throughout its life...
's candidate, Pedro Aguirre Cerda
Pedro Aguirre Cerda
Pedro Aguirre Cerda was a Chilean political figure. A member of the Radical Party, he was chosen as the Popular Front's candidate for the 1938 presidential election, and was triumphally elected. He governed Chile until his death in 1941...
, who narrowly won the election.

Of the former members of the party only Jorge Prat
Jorge Prat
Jorge Prat Echaurren was a Chilean nationalist politician.Prat was born in Santiago, Chile. A veteran of the nationalist political scene, he was first associated with the National Socialist Movement of Chile or Nacis, albeit as a low level member...
gained much influence. Publishing a weekly paper, Estanquero, between 1949 and 1954, he served as a cabinet minister in Carlos Ibáñez del Campo
Carlos Ibáñez del Campo
General Carlos Ibáñez del Campo was a Chilean Army officer and political figure. He served as dictator between 1927 and 1931 and as constitutional President from 1952 to 1958.- The coups of 1924 and 1925 :...
's government and attempted to run for President of Chile
President of Chile
The President of the Republic of Chile is both the head of state and the head of government of the Republic of Chile. The President is responsible of the government and state administration...
in 1964.

During the Popular unity government (1970-1973) there was an attempt to reunify scattered National Socialists forces under a new organisation.They formed the Vanguardia Revolucionaria Nacional whose flag it seems identical to the MSN although this later version had the thunder pointing to the opposite side. Their leader was General Canales, a retired right wing fanatic. It gathered small amounts of right wing extremists , was later disbanded when the military took power in a Coup de Etat, and its members mostly became agents of and collaborators with the military dictatorship of general Augusto Pinochet.
The source of this article is wikipedia, the free encyclopedia.  The text of this article is licensed under the GFDL.