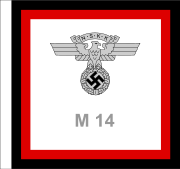 The National Socialist Motor Corps was the smallest of the Nazi Party organizations and had originally been formed as a motorized corps of the Sturmabteilung
Sturmabteilung
The Sturmabteilung functioned as a paramilitary organization of the National Socialist German Workers' Party . It played a key role in Adolf Hitler's rise to power in the 1920s and 1930s...
(SA). In 1934, the group had a membership of approximately ten thousand and was separated from the SA to become an independent organization. This action may have saved the NSKK from extinction, as shortly thereafter the SA suffered a major purge during the Night of the Long Knives
Night of the Long Knives
The Night of the Long Knives , sometimes called "Operation Hummingbird " or in Germany the "Röhm-Putsch," was a purge that took place in Nazi Germany between June 30 and July 2, 1934, when the Nazi regime carried out a series of political murders...
.

Membership in the NSKK did not require any knowledge of automobiles and the group was known to accept persons for membership without drivers' licenses
Driver's license
A driver's license/licence , or driving licence is an official document which states that a person may operate a motorized vehicle, such as a motorcycle, car, truck or a bus, on a public roadway. Most U.S...
. It was thought that training in the NSKK would make up for any previous lack of knowledge. The NSKK did, however, adhere to racial doctrine and screened its members for Aryan
Aryan
Aryan is an English language loanword derived from Sanskrit ārya and denoting variously*In scholarly usage:**Indo-Iranian languages *in dated usage:**the Indo-European languages more generally and their speakers...
qualities. The NSKK was also a paramilitary organization with its own system of paramilitary ranks
Ranks and insignia of the National Socialist Motor Corps
The Ranks and insignia of the National Socialist Motor Corps were a paramilitary rank system used between the years of 1931 and 1945...
.

With the outbreak of World War II in 1939, the National Socialist Motor Corps became a target of the Wehrmacht
Wehrmacht
The Wehrmacht – from , to defend and , the might/power) were the unified armed forces of Nazi Germany from 1935 to 1945. It consisted of the Heer , the Kriegsmarine and the Luftwaffe .-Origin and use of the term:...
for recruitment, since NSKK members possessed knowledge of motorized transport, whereas the bulk of the Wehrmacht relied on horse
Horse
The horse is one of two extant subspecies of Equus ferus, or the wild horse. It is a single-hooved mammal belonging to the taxonomic family Equidae. The horse has evolved over the past 45 to 55 million years from a small multi-toed creature into the large, single-toed animal of today...
s. Most NSKK members thereafter joined the regular military, serving in the transport corps of the various service branches.

In 1945, the NSKK was disbanded and the group was declared a "condemned organization" at the Nuremberg Trials
Nuremberg Trials
The Nuremberg Trials were a series of military tribunals, held by the victorious Allied forces of World War II, most notable for the prosecution of prominent members of the political, military, and economic leadership of the defeated Nazi Germany....
(although not a criminal one). This was due in part to the NSKK’s origins in the SA and its doctrine of racial superiority required from its members.