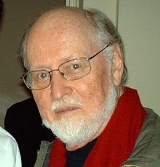 Overview
John Towner Williams is an American composer, conductor, and pianist. In a career spanning almost six decades, he has composed some of the most recognizable film score
Film score
A film score is original music written specifically to accompany a film, forming part of the film's soundtrack, which also usually includes dialogue and sound effects...
s in the history of motion pictures, including the Star Wars saga
Star Wars music
The music of Star Wars consists of the scores written for all six Star Wars films by composer John Williams from 1977 to 1983 for the Original Trilogy, and 1999 to 2005 for the Prequel Trilogy. It includes the Star Wars: The Clone Wars music written by Kevin Kiner...
, Jaws
Jaws (film)
Jaws is a 1975 American horror-thriller film directed by Steven Spielberg and based on Peter Benchley's novel of the same name. In the story, the police chief of Amity Island, a fictional summer resort town, tries to protect beachgoers from a giant man-eating great white shark by closing the beach,...
, Superman, the Indiana Jones films, E.T. the Extra-Terrestrial
E.T. the Extra-Terrestrial
E.T. the Extra-Terrestrial is a 1982 American science fiction film co-produced and directed by Steven Spielberg, written by Melissa Mathison and starring Henry Thomas, Dee Wallace, Robert MacNaughton, Drew Barrymore, and Peter Coyote...
, Hook
Hook (film)
Hook is a 1991 American fantasy film directed by Steven Spielberg. The film stars Robin Williams, Dustin Hoffman, Julia Roberts, Bob Hoskins, and features Maggie Smith, Caroline Goodall, Charlie Korsmo, Amber Scott, and Dante Basco. Hook acts as a sequel to Peter Pan's original adventures, focusing...
, Jurassic Park
Jurassic Park (film)
Jurassic Park is a 1993 American science fiction adventure film directed by Steven Spielberg. The film is based on the novel of the same name by Michael Crichton. It stars Sam Neill, Laura Dern, Jeff Goldblum, Richard Attenborough, Martin Ferrero, and Bob Peck...
, Schindler's List
Schindler's List
Schindler's List is a 1993 American film about Oskar Schindler, a German businessman who saved the lives of more than a thousand mostly Polish-Jewish refugees during the Holocaust by employing them in his factories. The film was directed by Steven Spielberg, and based on the novel Schindler's Ark...
, Home Alone and the first three Harry Potter
Harry Potter (film series)
The Harry Potter film series is a British-American film series based on the Harry Potter novels by the British author J. K. Rowling...
films. He has had a long association with director Steven Spielberg
Steven Spielberg
Steven Allan Spielberg KBE is an American film director, screenwriter, producer, video game designer, and studio entrepreneur. In a career of more than four decades, Spielberg's films have covered many themes and genres. Spielberg's early science-fiction and adventure films were seen as an...
, composing the music for all but two of Spielberg's feature films.

Other notable works by Williams include theme music for four Olympic Games, NBC Sunday Night Football
NBC Sunday Night Football
NBC Sunday Night Football is a weekly television broadcast of Sunday evening National Football League games on NBC that began airing on Sunday, August 6, 2006 with the pre-season opening Hall of Fame Game. Al Michaels serves as the play-by-play announcer, with Cris Collinsworth as the color...
, the NBC Nightly News
NBC Nightly News
NBC Nightly News is the flagship daily evening television news program for NBC News and broadcasts. NBC Nightly News has aired from Studio 3B, located on floors 3 of the NBC Studios is the headquarters of the GE Building forms the centerpiece of 30th Rockefeller Center it is located in the center...
, the rededication of the Statue of Liberty
Liberty Weekend
Liberty Weekend was the celebration of the restoration and centenary of the Statue of Liberty in New York City, New York. It began on Thursday, July 3 and ended on Sunday, July 6, 1986.-Opening Ceremonies:...
, the DreamWorks Pictures production logo
Production logo
A production logo, vanity card, vanity plate, vanity logo or vogo is a logo used by movie studios and television production companies to brand what they produce. Vanity logos are usually seen at the beginning of a theatrical movie , or at the end of a television program or TV movie...
, and the television series Lost in Space
Lost in Space
Lost in Space is a science fiction TV series created and produced by Irwin Allen, filmed by 20th Century Fox Television, and broadcast on CBS. The show ran for three seasons, with 83 episodes airing between September 15, 1965, and March 6, 1968...
. Williams has also composed numerous classical concerti, and he served as the principal conductor of the Boston Pops Orchestra
Boston Pops Orchestra
The Boston Pops Orchestra is an American orchestra based in Boston, Massachusetts, that specializes in playing light classical and popular music....
from 1980 to 1993; he is now the orchestra's conductor laureate
Laureate
In English, the word laureate has come to signify eminence or association with literary or military glory. It is also used for winners of the Nobel Prize.-History:...
.

"So much of what we do is ephemeral and quickly forgotten, even by ourselves, so it's gratifying to have something you have done linger in people's memories."

"There’s a very basic human, non-verbal aspect to our need to make music and use it as part of our human expression. It doesn’t have to do with body movements, it doesn't have to do with articulation of a language, but with something spiritual."