Encyclopedia
Marco Polo "Mark" di Suvero is an American abstract expressionist sculptor born Marco Polo Levi in Shanghai
Shanghai
Shanghai is the largest city by population in China and the largest city proper in the world. It is one of the four province-level municipalities in the People's Republic of China, with a total population of over 23 million as of 2010...
, China
China
Chinese civilization may refer to:* China for more general discussion of the country.* Chinese culture* Greater China, the transnational community of ethnic Chinese.* History of China* Sinosphere, the area historically affected by Chinese culture...
in 1933 to Italian expatriates. He immigrated to San Francisco, California
San Francisco, California
San Francisco , officially the City and County of San Francisco, is the financial, cultural, and transportation center of the San Francisco Bay Area, a region of 7.15 million people which includes San Jose and Oakland...
in 1942 with his family. From 1953 to 1957, he attended the University of California, Berkeley
University of California, Berkeley
The University of California, Berkeley , is a teaching and research university established in 1868 and located in Berkeley, California, USA...
to study Philosophy. He later moved to New York City
New York City
New York is the most populous city in the United States and the center of the New York Metropolitan Area, one of the most populous metropolitan areas in the world. New York exerts a significant impact upon global commerce, finance, media, art, fashion, research, technology, education, and...
where he was surrounded by an explosion of Abstract Expressionism. While working in construction, he was critically injured in a freight elevator accident and focused all his attention on sculpture.

While in rehabilitation, he learned to work with an arc welder. His early works were large outdoor pieces that incorporated railroad ties, tires, scrap metal and structural steel. This exploration has transformed over time into a focus on I-beams and heavy gauge metal. Many of the pieces contain sections that are allowed to swing and rotate giving the overall forms a considerable degree of motion. He prides himself on his hands-on approach to the fabrication and installation of his work.

di Suvero was a founding member of the Park Place Gallery
Park Place Gallery
Park Place Gallery was a contemporary art gallery located in SoHo in Lower Manhattan, New York City, USA, during the mid to late 1960s. Park Place Gallery was located at 542 West Broadway, on what is now LaGuardia Place just north of Houston Street in the neighborhood that is now called "SoHo"...
and ConStruct, both artist-owned galleries, the former was the first SoHo
SoHo
SoHo is a neighborhood in Lower Manhattan, New York City, notable for being the location of many artists' lofts and art galleries, and also, more recently, for the wide variety of stores and shops ranging from trendy boutiques to outlets of upscale national and international chain stores...
Contemporary art
Contemporary art
Contemporary art can be defined variously as art produced at this present point in time or art produced since World War II. The definition of the word contemporary would support the first view, but museums of contemporary art commonly define their collections as consisting of art produced...
gallery and the latter promoted and organized large-scale sculpture exhibitions throughout the United States. Other founding members include John Raymond Henry
John Raymond Henry
John Raymond Henry is an internationally renowned sculptor. Since 1971, Henry has produced many monumental and large-scaled works of art for museums, cities and public institutions across the United States, Europe and Asia...
, Kenneth Snelson
Kenneth Snelson
Kenneth Snelson is a contemporary sculptor and photographer. His sculptural works are composed of flexible and rigid components arranged according to the idea of 'tensegrity', although Snelson does not use the term....
, Lyman Kipp
Lyman Kipp
Lyman Kipp is a sculptor and painter who creates pieces that are composed of strong vertical and horizontal objects and are often painted in bold primary colors recalling arrangements by De Stijl Constructivists...
and Charles Ginnever
Charles Ginnever
Charles Ginnever is an American sculptor. He was born in San Mateo, California, in 1931. In 1957, he received his BA from the San Francisco Art Institute and received his MFA from Cornell University in 1959. He started working with canvas and steel scraps painted with bright patterns...
.

His distinctive, large bold pieces can be found all over the world. He continues to be the subject of multiple exhibitions and his commitment to emerging artists is undeniable through the Athena Foundation and the Socrates Sculpture Park
Socrates Sculpture Park
Socrates Sculpture Park is an outdoor exhibition space for sculpture. It is located one block from the Noguchi Museum at the intersection of Broadway and Vernon Boulevard in the neighborhood of Long Island City, Queens, New York City...
. di Suvero has received the Lifetime Achievement in Contemporary Sculpture Award from the International Sculpture Center and, in 2005, the 11th Annual Heinz Award
Heinz Award
The Heinz Award is an award currently given annually to ten honorees by the Heinz Family Foundation. The Heinz Awards recognize outstanding individuals for their contributions in the five areas of: Arts and Humanities, the Environment, the Human Condition, Public Policy, and Technology, the Economy...
in the Arts and Humanities for his commitment to aspiring artists.

di Suvero currently lives in New York City
New York City
New York is the most populous city in the United States and the center of the New York Metropolitan Area, one of the most populous metropolitan areas in the world. New York exerts a significant impact upon global commerce, finance, media, art, fashion, research, technology, education, and...
with his second wife and daughter. He has three working studios, since 1981 in Long Island City, a former brickyard on the edge of the East River in Long Island ,an open air fabrication facility in Petaluma California, which he developed in partnership with first wife from 1975 to 1988 as the third studio on a river barge in Chalon-sur-Saône, France, since 1972.

He most recently published a book, titled Dreambook, a compilation of pictures of sculptures, poems, and ideas. The vibrant colors in it are reflected in the bright colors he always wears. 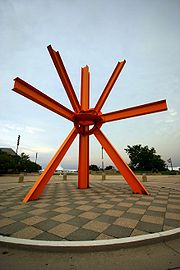