Encyclopedia
Nanyuki is a market town
Market town
Market town or market right is a legal term, originating in the medieval period, for a European settlement that has the right to host markets, distinguishing it from a village and city...
in central-east Rift Valley region of Kenya
Kenya
Kenya , officially known as the Republic of Kenya, is a country in East Africa that lies on the equator, with the Indian Ocean to its south-east...
lying northwest of Mount Kenya
Mount Kenya
Mount Kenya is the highest mountain in Kenya and the second-highest in Africa, after Kilimanjaro. The highest peaks of the mountain are Batian , Nelion and Point Lenana . Mount Kenya is located in central Kenya, just south of the equator, around north-northeast of the capital Nairobi...
along the A2 road and at the terminus of the branch railway from Nairobi
Nairobi
Nairobi is the capital and largest city of Kenya. The city and its surrounding area also forms the Nairobi County. The name "Nairobi" comes from the Maasai phrase Enkare Nyirobi, which translates to "the place of cool waters". However, it is popularly known as the "Green City in the Sun" and is...
. It is situated just north of the Equator
Equator
An equator is the intersection of a sphere's surface with the plane perpendicular to the sphere's axis of rotation and containing the sphere's center of mass....
(0° 01' North). It was founded in 1907 by British
United Kingdom
The United Kingdom of Great Britain and Northern IrelandIn the United Kingdom and Dependencies, other languages have been officially recognised as legitimate autochthonous languages under the European Charter for Regional or Minority Languages...
settlers, some of whose descendants still live in and around the town. Nanyuki is currently the main airbase of the Kenya Air Force
Kenya Air Force
The Kenya Air Force is the national Air Force of Kenya.The main airbase operating fighters is Laikipia Air Base in Nanyuki, while Moi Air Base in Eastleigh, Nairobi is the HQ & operations Kenya Air Force. Other bases include FOB Mombasa The Kenya Air Force (KAF) is the national Air Force of...
. The British Army
British Army
The British Army is the land warfare branch of Her Majesty's Armed Forces in the United Kingdom. It came into being with the unification of the Kingdom of England and Scotland into the Kingdom of Great Britain in 1707. The new British Army incorporated Regiments that had already existed in England...
also keeps a base at The Nanyuki Show Ground (NSG) from where it conducts yearly desert and jungle training exercises on the mountain and in the arid areas to the north. Nanyuki is the capital of Laikipia County. In addition to a town hall, therefore, it also houses the county headquarters.

The town was started by British settlers during in the early days of colonial Kenya in 1907. Some of their descendants still live in or around the town. The town is today multi-cultural and is the market center for farms, ranches, game parks and wildlife conservancies in the region. It's also the base for people seeking to climb Mount Kenya, the most famous landmark in the country. The Equator line passes 6.5 km (4 mi) south of this town. 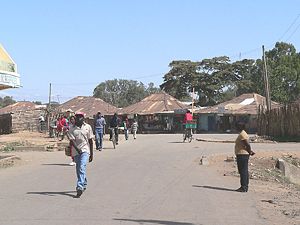 Nanyuki municipality had an urban population of 31,577 in 1999 (http://treasury.go.ke/cbs.go.ke/pdf/authority.pdf). Most members of the population earn their money through trade. Shops in the town supply many farms, ranches and game parks in a wide circle. Originally, most shops were owned by Indians, who still form a sizable part of the population. Climbers and backpackers visit Nanyuki on their way to or from Mount Kenya along the Sirimon and Burguret routes and many other tourists pass through the town. Nanyuki therefore has many hotels, of which Mount Kenya Safari Club and Sportsman’s Arms Hotel are the most prominent and best known. Other hotels include Lion’s Court, Equatorial Hotel, Mount Kenya Paradise Hotel and Joskaki Hotel. The oldest restaurant in town is The Marina and it is still fairly popular. Several years ago, a restaurant was opened south of Nanyuki built inside a huge tree. Named “Trout Tree Restaurant” its main attraction is obviously trout
Trout
Trout is the name for a number of species of freshwater and saltwater fish belonging to the Salmoninae subfamily of the family Salmonidae. Salmon belong to the same family as trout. Most salmon species spend almost all their lives in salt water...
prepared in various ways. Patrons can also visit the trout breeding installation at the foot of the tree. Another notable restaurant is "Barneys" located at Nanyuki Civil Airfield, once the base of the No. 1340 Flight RAF, which flew Harvard
T-6 Texan
The North American Aviation T-6 Texan was a single-engine advanced trainer aircraft used to train pilots of the United States Army Air Forces, United States Navy, Royal Air Force and other air forces of the British Commonwealth during World War II and into the 1950s...
s during the Mau Mau Uprising
Mau Mau Uprising
The Mau Mau Uprising was a military conflict that took place in Kenya between 1952 and 1960...
.

There is little large-scale industry in Nanyuki. There used to be a textile factory, Mount Kenya Textile (Mountex) Mills. The British management deteriorated over the years, which largely contributed to its bankruptcy in 1978. Years later, the factory, which had remained more or less intact, was bought by an Asian businessman, an inhabitant of Nanyuki. Some textile is now produced. There have also been a number of sawmills in Nanyuki. However, with the almost total ban on tree felling on Mount Kenya, these either closed down or are now eking out a difficult existence. Recently, large horticultural operations have come to Nanyuki.

A park
Park
A park is a protected area, in its natural or semi-natural state, or planted, and set aside for human recreation and enjoyment, or for the protection of wildlife or natural habitats. It may consist of rocks, soil, water, flora and fauna and grass areas. Many parks are legally protected by...
lies in the centre of the town and two rivers, the Nanyuki and Liki Rivers, pass through it. The Equator
Equator
An equator is the intersection of a sphere's surface with the plane perpendicular to the sphere's axis of rotation and containing the sphere's center of mass....
passes through the southern part of Nanyuki. One crosses it when approaching Nanyuki on the A2 from the south. This spot is popular with tourists who have themselves photographed there. Some people are usually at hand to show them the supposed effect of the Coriolis force, which they say makes draining water swirl clockwise or anticlockwise depending on whether one is on the northern or southern hemisphere
Earth
Earth is the third planet from the Sun, and the densest and fifth-largest of the eight planets in the Solar System. It is also the largest of the Solar System's four terrestrial planets...
, though as noted in the article about the Coriolis force, the effect is detectable only in the laboratory and the "demonstrations" at the equato are merely engaging diversions.

Nanyuki can be reached by air. Its airport lies 6.5 km (4 mi) south of the town and is served by light aircraft along the highway to Nairobi . There is a regular air service by Air Kenya, which is very convenient for businessmen and tourists. The town is also reachable using the all weather road from Nairobi. Tourists can visit a number of parks and reserves in the vicinity of Nanyuki, the most obvious one being Mount Kenya National Park
Mount Kenya National Park
Mount Kenya National Park, established in 1949, protects the region surrounding Mount Kenya. Initially it was a forest reserve before being announced as a national park. Currently the national park is within the forest reserve which encircles it. In April 1978 the area was designated a UNESCO...
. Others are Sweetwaters Game Reserve, Lewa Wildlife Conservancy
Lewa Wildlife Conservancy
The Lewa Wildlife Conservancy is located in northern Kenya. It was formed in 1995. It is a wildlife sanctuary incorporating the Ngare Ndare Forest and covering over . The Conservancy is home to a wide variety of wildlife including the rare and endangered black rhino, Grevy’s zebra and sitatunga...
, Samburu National Reserve
Samburu National Reserve
The Samburu National Reserve is located on the banks of the Ewaso Ng'iro river in Kenya; on the other side of the river is the Buffalo Springs National Reserve in Northern Kenya. It is 165 km² in size and 350 kilometers from Nairobi and ranges in altitude from 800 to 1230m above sea level...
and Shaba National Reserve
Shaba National Reserve
Shaba National Reserve is a protected area in northern Kenya to the east of the Samburu and Buffalo Springs national reserves. Together, the three reserves form a large protected area....
.

Nanyuki has some of the cleanest water in Kenya since the water supply source is a river on Mt. Kenya. The entire water system is gravity fed, from the supply to the sewer system.

The current mayor
Mayor
In many countries, a Mayor is the highest ranking officer in the municipal government of a town or a large urban city....
of Nanyuki is Isaac Mathenge of PNU
Party of National Unity (Kenya)
Party of National Unity was founded as a political coalition of parties in Kenya. On September 16, 2007, Kenyan President Mwai Kibaki announced the party formation and said that he would run as its presidential candidate in the December 2007 Kenyan elections...