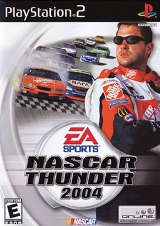 Encyclopedia
NASCAR Thunder 2004 is a racing simulator by EA Sports
EA Sports
EA Sports is a brand of Electronic Arts that creates and develops sports video games. Formerly a marketing gimmick of Electronic Arts, in which they tried to mimic real-life sports networks by calling themselves "EA Sports Network" with pictures or endorsements of real commentators such as John...
, released in 2003 and available in separate versions for PlayStation, PlayStation 2
PlayStation 2
The PlayStation 2 is a sixth-generation video game console manufactured by Sony as part of the PlayStation series. Its development was announced in March 1999 and it was first released on March 4, 2000, in Japan...
, Xbox
Xbox
The Xbox is a sixth-generation video game console manufactured by Microsoft. It was released on November 15, 2001 in North America, February 22, 2002 in Japan, and March 14, 2002 in Australia and Europe and is the predecessor to the Xbox 360. It was Microsoft's first foray into the gaming console...
, and PC
Personal computer
A personal computer is any general-purpose computer whose size, capabilities, and original sales price make it useful for individuals, and which is intended to be operated directly by an end-user with no intervening computer operator...
. It features the 2002 champion Tony Stewart
Tony Stewart
Anthony Wayne "Tony" Stewart is an American auto racing driver and owner. Throughout his racing career, Stewart has won titles in Indy cars and stock cars as well as midget, sprint and USAC Silver Crown cars, giving him the recognition of "one of the finest racers of his generation."Stewart...
on the cover with a scowling look to represent the new Grudges and Alliances feature. It was the only game as of 2002 to feature the previous Winston Cup (Sprint) Cup Champion on the cover. The game had the most extensive soundtrack of the series up from four songs from the previous game.