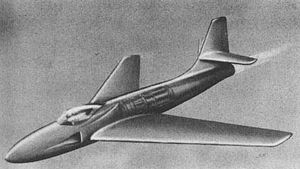 When properly implemented, a NACA duct allows air to flow into an internal duct, often for cooling purposes, with a minimal disturbance to the flow. The design was originally called a "submerged inlet", since it consists of a shallow ramp with curved walls recessed into the exposed surface of a streamlined body, such as an aircraft
Fixed-wing aircraft
A fixed-wing aircraft is an aircraft capable of flight using wings that generate lift due to the vehicle's forward airspeed. Fixed-wing aircraft are distinct from rotary-wing aircraft in which wings rotate about a fixed mast and ornithopters in which lift is generated by flapping wings.A powered...
. It is especially favored in racing car design.

Prior submerged inlet experiments showed poor pressure recovery due to the slow-moving boundary layer
Boundary layer
In physics and fluid mechanics, a boundary layer is that layer of fluid in the immediate vicinity of a bounding surface where effects of viscosity of the fluid are considered in detail. In the Earth's atmosphere, the planetary boundary layer is the air layer near the ground affected by diurnal...
entering the inlet. This design is believed to work because the combination of the gentle ramp angle and the curvature profile of the walls creates counter-rotating vortices
Vortex
A vortex is a spinning, often turbulent,flow of fluid. Any spiral motion with closed streamlines is vortex flow. The motion of the fluid swirling rapidly around a center is called a vortex...
which deflect the boundary layer away from the inlet and draws in the faster moving air, while avoiding the form drag and flow separation
Flow separation
All solid objects travelling through a fluid acquire a boundary layer of fluid around them where viscous forces occur in the layer of fluid close to the solid surface. Boundary layers can be either laminar or turbulent...
that can occur with protruding scoop designs. This type of flush inlet generally cannot achieve the larger ram pressures and flow volumes of an external design, and so is rarely used for the jet engine
Jet engine
A jet engine is a reaction engine that discharges a fast moving jet to generate thrust by jet propulsion and in accordance with Newton's laws of motion. This broad definition of jet engines includes turbojets, turbofans, rockets, ramjets, pulse jets...
intake application for which it was originally designed, such as the North American YF-93
North American YF-93
-Bibliography:* Davis, Larry. F-86 Sabre in action. Carrollton, Texas: Squadron/Signal Publications, 1992. ISBN 0-89747-282-9.* Pace, Steve. X-Fighters: USAF Experimental and Prototype Fighters, XP-59 to YF-23. Osceola, Wisconsin: Motorbooks International, 1991. ISBN 0-87938-540-5.* Sgarlato, Nico...
and Short SB.4 Sherpa. It is, however, common for piston engine and ventilation intakes.