Encyclopedia
A mutual savings bank is a financial institution
Financial institution
In financial economics, a financial institution is an institution that provides financial services for its clients or members. Probably the most important financial service provided by financial institutions is acting as financial intermediaries...
chartered by a central
Central government
A central government also known as a national government, union government and in federal states, the federal government, is the government at the level of the nation-state. The structure of central governments varies from institution to institution...
or regional government, without capital stock, that is owned by its members who subscribe to a common fund. From this fund claims, loans, etc., are paid. Profits after deductions are shared between the members. The institution is intended to provide a safe place for individual members to save and to invest those savings in mortgage
Mortgage loan
A mortgage loan is a loan secured by real property through the use of a mortgage note which evidences the existence of the loan and the encumbrance of that realty through the granting of a mortgage which secures the loan...
s, loan
Loan
A loan is a type of debt. Like all debt instruments, a loan entails the redistribution of financial assets over time, between the lender and the borrower....
s, stocks
Stocks
Stocks are devices used in the medieval and colonial American times as a form of physical punishment involving public humiliation. The stocks partially immobilized its victims and they were often exposed in a public place such as the site of a market to the scorn of those who passed by...
, bond
Bond (finance)
In finance, a bond is a debt security, in which the authorized issuer owes the holders a debt and, depending on the terms of the bond, is obliged to pay interest to use and/or to repay the principal at a later date, termed maturity...
s and other securities
Security (finance)
A security is generally a fungible, negotiable financial instrument representing financial value. Securities are broadly categorized into:* debt securities ,* equity securities, e.g., common stocks; and,...
and to share in any profits or losses that result. The members own the business.

The institution most frequently identified as the first modern savings bank was the “Savings and Friendly Society” organized by the Reverend Henry Duncan in 1810, in Ruthwell, Scotland
Scotland
Scotland is a country that is part of the United Kingdom. Occupying the northern third of the island of Great Britain, it shares a border with England to the south and is bounded by the North Sea to the east, the Atlantic Ocean to the north and west, and the North Channel and Irish Sea to the...
. Rev. Duncan established the small bank in order to encourage his working class congregation to develop thrift. European voluntary organizations and “friendly societies” provided the inspiration for their state incorporated American counterparts. 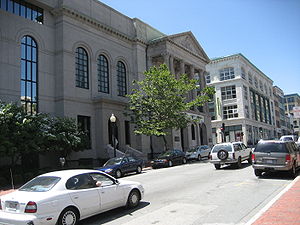 Since the 1970s, when the industry was deregulated, thousands of mutual savings banks have been converted into stock ownership companies, raising more than $40 billion. In 2010, only about 600 remained. These conversions have often resulted in large financial rewards for top bank executives.

Mutual savings banks were designed to stimulate savings by individuals; the exclusive function of these banks is to protect deposits, make limited, secure investments, and provide depositors with interest. Unlike commercial bank
Commercial bank
After the implementation of the Glass–Steagall Act, the U.S. Congress required that banks engage only in banking activities, whereas investment banks were limited to capital market activities. As the two no longer have to be under separate ownership under U.S...
s, savings banks have no stockholders; the entirety of profits beyond the upkeep of the bank belongs to the depositors of the mutual savings bank. Mutual savings banks prioritize security, and as a result, have historically been characteristically conservative in their investments. This conservatism is what allowed mutual savings banks to remain stable throughout the turbulent period of the Great Depression, despite the failing of commercial banks and savings and loan associations.