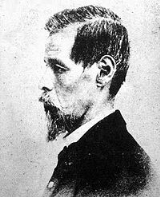 Encyclopedia
Count was a statesman and diplomat in Meiji period
Meiji period
The , also known as the Meiji era, is a Japanese era which extended from September 1868 through July 1912. This period represents the first half of the Empire of Japan.- Meiji Restoration and the emperor :...
Japan
Japan
Japan is an island nation in East Asia. Located in the Pacific Ocean, it lies to the east of the Sea of Japan, China, North Korea, South Korea and Russia, stretching from the Sea of Okhotsk in the north to the East China Sea and Taiwan in the south...
.

Mutsu Munemitsu was born in Wakayama domain, Kii Province
Kii Province
, or , was a province of Japan in the part of Honshū that is today Wakayama Prefecture, as well as the southern part of Mie Prefecture. Kii bordered Ise, Izumi, Kawachi, Shima, and Yamato Provinces. The Kii Peninsula takes its name from this province....
as the sixth son of Date Munehiro
Date Munehiro
Date Munehiro or Chihiro（Japanese:伊達 宗広 or 千広; June 24, 1802 – May 18, 1877）was a Samurai of Kii Domain and Scholar of Kokugaku, living during the late Edo Period and early Meiji Era. He was father of Mutsu Munemitsu（陸奥 宗光...
, a samurai
Samurai
is the term for the military nobility of pre-industrial Japan. According to translator William Scott Wilson: "In Chinese, the character 侍 was originally a verb meaning to wait upon or accompany a person in the upper ranks of society, and this is also true of the original term in Japanese, saburau...
retainer of the Kii Tokugawa clan
Tokugawa clan
The was a powerful daimyo family of Japan. They nominally descended from Emperor Seiwa and were a branch of the Minamoto clan by the Nitta clan. However, the early history of this clan remains a mystery.-History:...
. His father was active in the Sonnō jōi
Sonno joi
is a Japanese political philosophy and a social movement derived from Neo-Confucianism; it became a political slogan in the 1850s and 1860s in the movement to overthrow the Tokugawa bakufu, during the Bakumatsu period.-Origin:...
movement, and Mutsu Munemitsu joined forces with Sakamoto Ryōma
Sakamoto Ryoma
was a leader of the movement to overthrow the Tokugawa shogunate during the Bakumatsu period in Japan. Ryōma used the alias .- Early life :Ryōma was born in Kōchi, of Tosa han . By the Japanese calendar, this was the sixth year of Tenpō...
and Itō Hirobumi
Ito Hirobumi
Prince was a samurai of Chōshū domain, Japanese statesman, four time Prime Minister of Japan , genrō and Resident-General of Korea. Itō was assassinated by An Jung-geun, a Korean nationalist who was against the annexation of Korea by the Japanese Empire...
in the movement to overthrow the Tokugawa shogunate
Tokugawa shogunate
The Tokugawa shogunate, also known as the and the , was a feudal regime of Japan established by Tokugawa Ieyasu and ruled by the shoguns of the Tokugawa family. This period is known as the Edo period and gets its name from the capital city, Edo, which is now called Tokyo, after the name was...
.

After the Meiji restoration
Meiji Restoration
The , also known as the Meiji Ishin, Revolution, Reform or Renewal, was a chain of events that restored imperial rule to Japan in 1868...
, Mutsu held a number of posts in the new Meiji government, including that of governor of Hyōgo Prefecture
Hyogo Prefecture
is a prefecture of Japan located in the Kansai region on Honshū island. The capital is Kobe.The prefecture's name was previously alternately spelled as Hiogo.- History :...
and later governor of Kanagawa Prefecture
Kanagawa Prefecture
is a prefecture located in the southern Kantō region of Japan. The capital is Yokohama. Kanagawa is part of the Greater Tokyo Area.-History:The prefecture has some archaeological sites going back to the Jōmon period...
, both of which were host to foreign settlements. He was head of the Land Tax Reform of 1873-1881, and served on the Genrōin
Genroin
' was a national assembly in early Meiji Japan, established after the Osaka Conference of 1875. It is also referred to as the Senate of Japan, Genrōin being the word used to describe the Roman Senate, and other western legislatures named after it....
. He conspired to assist Saigō Takamori
Saigo Takamori
was one of the most influential samurai in Japanese history, living during the late Edo Period and early Meiji Era. He has been dubbed the last true samurai.-Early life:...
in the Satsuma Rebellion
Satsuma Rebellion
The was a revolt of Satsuma ex-samurai against the Meiji government from January 29 to September 24, 1877, 9 years into the Meiji Era. It was the last, and the most serious, of a series of armed uprisings against the new government.-Background:...
and was imprisoned from 1878 until 1883. While in prison he translated Jeremy Bentham
Jeremy Bentham
Jeremy Bentham was an English jurist, philosopher, and legal and social reformer. He became a leading theorist in Anglo-American philosophy of law, and a political radical whose ideas influenced the development of welfarism...
's Utilitarianism
Utilitarianism
Utilitarianism is an ethical theory holding that the proper course of action is the one that maximizes the overall "happiness", by whatever means necessary. It is thus a form of consequentialism, meaning that the moral worth of an action is determined only by its resulting outcome, and that one can...
in Japanese.

After he left prison, he rejoined the government as an official of the Foreign Ministry
Ministry of Foreign Affairs (Japan)
The is a cabinet level ministry of Japan responsible for the country's foreign relations.The ministry is due to the second term of the third article of the National Government Organization Act , and the Ministry of Foreign Affairs Establishment Act establishes the ministry...
, and in 1884 was sent to Europe for studies. Later he became Japanese Minister to Washington D.C. (1888-1890), during which time he established formal diplomatic relations between Japan and Mexico
Mexico
The United Mexican States , commonly known as Mexico , is a federal constitutional republic in North America. It is bordered on the north by the United States; on the south and west by the Pacific Ocean; on the southeast by Guatemala, Belize, and the Caribbean Sea; and on the east by the Gulf of...
, and partially revised the unequal treaties
Unequal Treaties
“Unequal treaty” is a term used in specific reference to a number of treaties imposed by Western powers, during the 19th and early 20th centuries, on Qing Dynasty China and late Tokugawa Japan...
between Japan and the United States.

On his return to Japan in 1890, he became Minister of Agriculture and Commerce
Ministry of Agriculture and Commerce
The was a cabinet-level ministry in the government of the Empire of Japan from 1881-1925. It was briefly recreated as the during World War II-History:...
. He was also elected to the House of Representatives of Japan
House of Representatives of Japan
The is the lower house of the Diet of Japan. The House of Councillors of Japan is the upper house.The House of Representatives has 480 members, elected for a four-year term. Of these, 180 members are elected from 11 multi-member constituencies by a party-list system of proportional representation,...
from the 1st Wakayama District for a single term in the 1890 General Election
Japanese general election, 1890
was the Empire of Japan’s first general election for members of the House of Representatives of the Diet of Japan. It was the first example of a popularly elected national assembly in Asia -History and background:...
. In 1892, he became Foreign Minister
Minister for Foreign Affairs (Japan)
The of Japan is the Cabinet member responsible for Japanese foreign policy and the chief executive of the Ministry of Foreign Affairs.Since the end of the American occupation of Japan, the position has been one of the most powerful in the Cabinet, as Japan's economic interests have long relied on...
in the Itō Hirobumi cabinet. In 1894, he concluded the Anglo-Japanese Treaty of Commerce and Navigation
Anglo-Japanese Treaty of Commerce and Navigation
The signed by Britain and Japan, on July 16, 1894, was a breakthrough agreement; it heralded the end of the unequal treaties and the system of extraterritoriality in Japan. The treaty came into force on July 17, 1899....
of 1894, which finally ended the unequal treaty status between Japan and Great Britain
Great Britain
Great Britain or Britain is an island situated to the northwest of Continental Europe. It is the ninth largest island in the world, and the largest European island, as well as the largest of the British Isles...
.

Mutsu was the lead Japanese negotiator in the Treaty of Shimonoseki
Treaty of Shimonoseki
The Treaty of Shimonoseki , known as the Treaty of Maguan in China, was signed at the Shunpanrō hall on April 17, 1895, between the Empire of Japan and Qing Empire of China, ending the First Sino-Japanese War. The peace conference took place from March 20 to April 17, 1895...
, which ended the First Sino-Japanese War
First Sino-Japanese War
The First Sino-Japanese War was fought between Qing Dynasty China and Meiji Japan, primarily over control of Korea...
on 1894-1895. The Triple Intervention
Triple Intervention
The was a diplomatic intervention by Russia, Germany, and France on 23 April 1895 over the terms of the Treaty of Shimonoseki signed between Japan and Qing dynasty China that ended the First Sino-Japanese War.-Treaty of Shimonoseki:...
by France
France
The French Republic , The French Republic , The French Republic , (commonly known as France , is a unitary semi-presidential republic in Western Europe with several overseas territories and islands located on other continents and in the Indian, Pacific, and Atlantic oceans. Metropolitan France...
, Germany
Germany
Germany , officially the Federal Republic of Germany , is a federal parliamentary republic in Europe. The country consists of 16 states while the capital and largest city is Berlin. Germany covers an area of 357,021 km2 and has a largely temperate seasonal climate...
and Russia
Russia
Russia or , officially known as both Russia and the Russian Federation , is a country in northern Eurasia. It is a federal semi-presidential republic, comprising 83 federal subjects...
reversed the gains that he had negotiated from China
China
Chinese civilization may refer to:* China for more general discussion of the country.* Chinese culture* Greater China, the transnational community of ethnic Chinese.* History of China* Sinosphere, the area historically affected by Chinese culture...
in the Treaty of Shimonoseki, and the Japanese public blamed Mutsu for the national humiliation. He resigned all government posts in May 1896 and moved to Ōiso
Oiso, Kanagawa
is a town located in Naka District, Kanagawa Prefecture, Japan. As of 2010, the town had an estimated population of 32,725 and a density of 1,910 persons per km². The total area was 17.18 km².-Geography:...
, Kanagawa, where he wrote his personal diplomatic memoirs Kenkenroku (蹇蹇録) after the treaty was signed to explain his views and actions. However, his memoirs could not be published until 1923 due to the diplomatic secrets they contained.

Mutsu lived in what is now Kyu-Furukawa Gardens
Kyu-Furukawa Gardens
is a Tokyo metropolitan park in Kita, Tokyo. The park includes an old western-style building, a rose garden, and a Japanese-style garden.-History:...
. Mutsu died of tuberculosis
Tuberculosis
Tuberculosis, MTB, or TB is a common, and in many cases lethal, infectious disease caused by various strains of mycobacteria, usually Mycobacterium tuberculosis. Tuberculosis usually attacks the lungs but can also affect other parts of the body...
in Takinogawa
Kita, Tokyo
is one of the special wards of Tokyo, Japan. In English, it calls itself the City of Kita .As of 2008, the ward has an estimated population of 332,140 and a population density of 16,140 persons per km². The total area is 20.59 km².-Geography:...
, Tokyo Prefecture
Tokyo-Fu
is a former Japanese prefecture. It was disbanded in 1943 and its municipalities, including Tokyo City, became part of the newly formed ....
in 1897.

Mutsu was ennobled with the title of hakushaku (count
Count
A count or countess is an aristocratic nobleman in European countries. The word count came into English from the French comte, itself from Latin comes—in its accusative comitem—meaning "companion", and later "companion of the emperor, delegate of the emperor". The adjective form of the word is...
) under the kazoku
Kazoku
The was the hereditary peerage of the Empire of Japan that existed between 1869 and 1947.-Origins:Following the Meiji Restoration of 1868, the ancient court nobility of Kyoto regained some of its lost status...
peerage system at the end of the Sino-Japanese War.