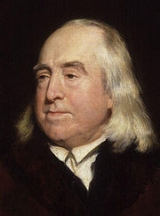 Overview
Jeremy Bentham was an English jurist, philosopher, and legal and social reformer. He became a leading theorist in Anglo-American philosophy of law, and a political radical whose ideas influenced the development of welfarism
Welfarism
Welfarism is a form of consequentialism. Like all forms of consequentialism, welfarism is based on the premise that actions, policies, and/or rules should be evaluated on the basis of their consequences. Welfarism is the view that the morally significant consequences are impacts on human welfare...
. He is best known for his advocacy of utilitarianism
Utilitarianism
Utilitarianism is an ethical theory holding that the proper course of action is the one that maximizes the overall "happiness", by whatever means necessary. It is thus a form of consequentialism, meaning that the moral worth of an action is determined only by its resulting outcome, and that one can...
and animal rights
Animal rights
Animal rights, also known as animal liberation, is the idea that the most basic interests of non-human animals should be afforded the same consideration as the similar interests of human beings...
, and the idea of the panopticon
Panopticon
The Panopticon is a type of building designed by English philosopher and social theorist Jeremy Bentham in the late eighteenth century. The concept of the design is to allow an observer to observe all inmates of an institution without them being able to tell whether or not they are being watched...
.

His position included arguments in favour of individual and economic freedom
Economic freedom
Economic freedom is a term used in economic and policy debates. As with freedom generally, there are various definitions, but no universally accepted concept of economic freedom...
, usury
Usury
Usury Originally, when the charging of interest was still banned by Christian churches, usury simply meant the charging of interest at any rate . In countries where the charging of interest became acceptable, the term came to be used for interest above the rate allowed by law...
, the separation of church and state
Separation of church and state
The concept of the separation of church and state refers to the distance in the relationship between organized religion and the nation state....
, freedom of expression, equal rights for women, the right to divorce, and the decriminalising of homosexual acts.

Prose is when all the lines except the last go on to the end. Poetry is when some of them fall short of it.

To what shall the character of utility be ascribed, if not to that which is a source of pleasure?

Submit not to any decree or other act of power, of the justice of which you are not yourself perfectly convinced. If a constable call upon you to serve in the militia, shoot the constable and not the enemy; — if the commander of a press-gang trouble you, push him into the sea — if a bailiff, throw him out of the window. If a judge sentences you to be imprisoned or put to death, have a dagger ready, and take a stroke first at the judge.

I. Nature has placed mankind under the governance of two sovereign masters, pain and pleasure. It is for them alone to point out what we ought to do, as well as to determine what we shall do.