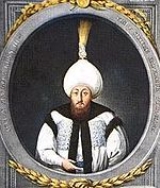 Encyclopedia
Mustafa III (January 28/18, 1717 – January 21, 1774) was the Sultan
Sultan
Sultan is a title with several historical meanings. Originally, it was an Arabic language abstract noun meaning "strength", "authority", "rulership", and "dictatorship", derived from the masdar سلطة , meaning "authority" or "power". Later, it came to be used as the title of certain rulers who...
of the Ottoman Empire
Ottoman Empire
The Ottoman EmpireIt was usually referred to as the "Ottoman Empire", the "Turkish Empire", the "Ottoman Caliphate" or more commonly "Turkey" by its contemporaries...
from 1757 to 1774. He was a son of Sultan Ahmed III
Ahmed III
Ahmed III was Sultan of the Ottoman Empire and a son of Sultan Mehmed IV . His mother was Mâh-Pâre Ummatullah Râbi'a Gül-Nûş Valide Sultan, originally named Evmania Voria, who was an ethnic Greek. He was born at Hajioglupazari, in Dobruja...
(1703–30) and was succeeded by his brother Abdul Hamid I (1774–89). He was born in Edirne
Edirne
Edirne is a city in Eastern Thrace, the northwestern part of Turkey, close to the borders with Greece and Bulgaria. Edirne served as the capital city of the Ottoman Empire from 1365 to 1453, before Constantinople became the empire's new capital. At present, Edirne is the capital of the Edirne...
. His mother was Âminā Mihr-î-Mâh Sultan
Amina Mihr-i Shah
Amina Mihr-i Shah .-Biography:She was the French second spouse of Ottoman Sultan Ahmed III, and the mother of Mustafa III....
.

An energetic and perceptive ruler, Mustafa III sought to modernize the army and the internal state machinery to bring his empire in line with the Powers of Europe.

Unfortunately the Ottoman state had declined so far that any general attempts at modernization were but a drop in the ocean, while any major plans to change the administrative status quo immediately roused the conservative Janissaries
Janissary
The Janissaries were infantry units that formed the Ottoman sultan's household troops and bodyguards...
and imams to the point of rebellion. Mustafa III did secure the services of foreign generals to initiate a reform of the infantry and artillery. The Sultan also ordered the founding of Academies for Mathematics, Navigation and the Sciences.

Well aware of his own military weakness, Mustafa III assiduously avoided war and was powerless to prevent the annexation of the Crimea
Crimea
Crimea , or the Autonomous Republic of Crimea , is a sub-national unit, an autonomous republic, of Ukraine. It is located on the northern coast of the Black Sea, occupying a peninsula of the same name...
by Catherine II of Russia
Catherine II of Russia
Catherine II, also known as Catherine the Great , Empress of Russia, was born in Stettin, Pomerania, Prussia on as Sophie Friederike Auguste von Anhalt-Zerbst-Dornburg...
(1762–96). However this action, combined with further Russian aggression in Poland
Poland
Poland , officially the Republic of Poland , is a country in Central Europe bordered by Germany to the west; the Czech Republic and Slovakia to the south; Ukraine, Belarus and Lithuania to the east; and the Baltic Sea and Kaliningrad Oblast, a Russian exclave, to the north...
compelled Mustafa III to declare war on Russia shortly before his death.