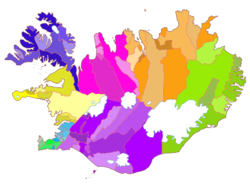 The municipalities of Iceland are local administrative areas in Iceland
Iceland
Iceland , described as the Republic of Iceland, is a Nordic and European island country in the North Atlantic Ocean, on the Mid-Atlantic Ridge. Iceland also refers to the main island of the country, which contains almost all the population and almost all the land area. The country has a population...
that provide a number of services to their inhabitants such as kindergarten
Kindergarten
A kindergarten is a preschool educational institution for children. The term was created by Friedrich Fröbel for the play and activity institute that he created in 1837 in Bad Blankenburg as a social experience for children for their transition from home to school...
s, elementary school
Elementary school
An elementary school or primary school is an institution where children receive the first stage of compulsory education known as elementary or primary education. Elementary school is the preferred term in some countries, particularly those in North America, where the terms grade school and grammar...
s, waste management
Waste management
Waste management is the collection, transport, processing or disposal,managing and monitoring of waste materials. The term usually relates to materials produced by human activity, and the process is generally undertaken to reduce their effect on health, the environment or aesthetics...
, social services, public housing
Public housing
Public housing is a form of housing tenure in which the property is owned by a government authority, which may be central or local. Social housing is an umbrella term referring to rental housing which may be owned and managed by the state, by non-profit organizations, or by a combination of the...
, public transportation, services to senior citizen
Senior citizen
Senior citizen is a common polite designation for an elderly person in both UK and US English, and it implies or means that the person is retired. This in turn implies or in fact means that the person is over the retirement age, which varies according to country. Synonyms include pensioner in UK...
s and handicap
Disability
A disability may be physical, cognitive, mental, sensory, emotional, developmental or some combination of these.Many people would rather be referred to as a person with a disability instead of handicapped...
ped people. They also govern zoning
Zoning
Zoning is a device of land use planning used by local governments in most developed countries. The word is derived from the practice of designating permitted uses of land based on mapped zones which separate one set of land uses from another...
and can voluntarily take on additional functions if they have the budget for it. The autonomy of municipalities over their own matters is guaranteed by the constitution of Iceland
Constitution of Iceland
The Constitution of Iceland is the supreme law of Iceland. It is composed of 80 articles in seven sections, and within it the leadership arrangement of the country is determined and the human rights of its citizens are preserved. The current constitution was first instituted on June 17, 1944; since...
.

The origin of the municipalities can be traced back to the commonwealth period in the 10th century when rural communities were organized into communes (hreppar) with the main purpose of providing help for the poorest individuals in society. When urbanization
Urbanization
Urbanization, urbanisation or urban drift is the physical growth of urban areas as a result of global change. The United Nations projected that half of the world's population would live in urban areas at the end of 2008....
began in Iceland during the 18th and 19th century, several independent township
Township
The word township is used to refer to different kinds of settlements in different countries. Township is generally associated with an urban area. However there are many exceptions to this rule. In Australia, the United States, and Canada, they may be settlements too small to be considered urban...
s (kaupstaðir) were created. The role of municipalities was further formalized during the 20th century and by the end of the century there was no longer any distinction made between urban and rural municipalities.

The trend in recent years has been to transfer more functions and power from the state to the municipalities. This has called for larger municipalities. The government encourages municipalities to merge but has taken a different approach to the issue than governments in other Nordic countries
Nordic countries
The Nordic countries make up a region in Northern Europe and the North Atlantic which consists of Denmark, Finland, Iceland, Norway and Sweden and their associated territories, the Faroe Islands, Greenland and Åland...
where forced amalgamation is regularly carried out (such as the municipal reform in Denmark
Denmark
Denmark is a Scandinavian country in Northern Europe. The countries of Denmark and Greenland, as well as the Faroe Islands, constitute the Kingdom of Denmark . It is the southernmost of the Nordic countries, southwest of Sweden and south of Norway, and bordered to the south by Germany. Denmark...
that took effect in 2007). Instead the process is voluntary. Municipalities negotiate possible mergers between themselves and the merger has to be agreed upon by the people of each municipality in a referendum. A similar approach is used by the Faroese
Faroe Islands
The Faroe Islands are an island group situated between the Norwegian Sea and the North Atlantic Ocean, approximately halfway between Scotland and Iceland. The Faroe Islands are a self-governing territory within the Kingdom of Denmark, along with Denmark proper and Greenland...
government. Municipalities with fewer than 50 people may be merged with others by force though.

Following is a list of Icelandic municipalities ranked by population in January 2011, showing that urbanization
Urbanization
Urbanization, urbanisation or urban drift is the physical growth of urban areas as a result of global change. The United Nations projected that half of the world's population would live in urban areas at the end of 2008....
is still going on. In population of the municipalities ranges from 52 to about 119,000, and by area they range from 2 km² to 8917 km². The average population in January 2011 is 4190.