Encyclopedia
The Munich Kammerspiele is a successful German language theatre in Munich
Munich
Munich The city's motto is "" . Before 2006, it was "Weltstadt mit Herz" . Its native name, , is derived from the Old High German Munichen, meaning "by the monks' place". The city's name derives from the monks of the Benedictine order who founded the city; hence the monk depicted on the city's coat...
. The Schauspielhaus in the Maximilianstrasse is the major stage. 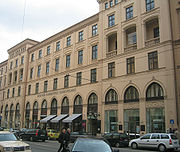 The Munich Kammerspiele was founded in 1911 as a private theatre of Erich Ziegel in Schwabing
Schwabing
Schwabing is a borough in the northern part of Munich, the capital of the German state of Bavaria. It is divided into the city borough 4 and the city borough 12...
. Since 1917 Otto Falckenberg
Otto Falckenberg
Otto Falckenberg was a German theatre director, manager and writer. In April 1901, he co-founded Die Elf Scharfrichter, the first political kabarett in Germany....
served as director and moved the theatre in 1926 into the Schauspielhaus in the Maximilianstrasse which had been constructed by Richard Riemerschmid
Richard Riemerschmid
Richard Riemerschmid was a German architect, painter, designer and city planner from Munich. He was a major figure in Jugendstil, the German form of Art Nouveau, and a founder of architecture in the style...
and Max Littmann
Max Littmann
Max Littmann was a German architect.Littmann was educated in the Gewerbeakademie Chemnitz and the Technische Hochschule Dresden...
in Art Nouveau
Art Nouveau
Art Nouveau is an international philosophy and style of art, architecture and applied art—especially the decorative arts—that were most popular during 1890–1910. The name "Art Nouveau" is French for "new art"...
style in 1901.
Since 1933 the theatre has been a municipal theatre of the City of Munich. Since 1961 the Werkraumtheater has served as second stage for the Kammerspiele. In 2001 the new large building by Gustav Peichl
Gustav Peichl
Gustav Peichl is an Austrian architect. Gustav built the EFA Radio Satellite Station in Aflenz Austria. And - is Ironimus - caricaturist.-External links:*...
with a stage for rehearsals next to the Schauspielhaus was opened.


The Artistic/Producing Directors of the Kammerspiele

One of the most famous Artistic/Producting Directors (Intendant
Intendant
The title of intendant has been used in several countries through history. Traditionally, it refers to the holder of a public administrative office...
) of the Kammerspiele was Otto Falckenberg
Otto Falckenberg
Otto Falckenberg was a German theatre director, manager and writer. In April 1901, he co-founded Die Elf Scharfrichter, the first political kabarett in Germany....
(1917-1944), known as the "mavin of Expressionism
Expressionism
Expressionism was a modernist movement, initially in poetry and painting, originating in Germany at the beginning of the 20th century. Its typical trait is to present the world solely from a subjective perspective, distorting it radically for emotional effect in order to evoke moods or ideas...
" in Germany during the Weimar Republic
Weimar Republic
The Weimar Republic is the name given by historians to the parliamentary republic established in 1919 in Germany to replace the imperial form of government...
, was credited with producing and/or directing many important productions at the Kammerspiele, including the first staged play of Bertolt Brecht
Bertolt Brecht
Bertolt Brecht was a German poet, playwright, and theatre director.An influential theatre practitioner of the 20th century, Brecht made equally significant contributions to dramaturgy and theatrical production, the latter particularly through the seismic impact of the tours undertaken by the...
, Drums in the Night
Drums in the Night
Drums in the Night is a play by the German modernist playwright Bertolt Brecht. Brecht wrote it between 1918 and 1920, and it received its first theatrical production in 1922. It is in the expressionist style of Ernst Toller and Georg Kaiser...
, in 1922, as well as those of Frank Wedekind
Frank Wedekind
Benjamin Franklin Wedekind , usually known as Frank Wedekind, was a German playwright...
, August Strindberg
August Strindberg
Johan August Strindberg was a Swedish playwright, novelist, poet, essayist and painter. A prolific writer who often drew directly on his personal experience, Strindberg's career spanned four decades, during which time he wrote over 60 plays and more than 30 works of fiction, autobiography,...
, and important productions of William Shakespeare
William Shakespeare
William Shakespeare was an English poet and playwright, widely regarded as the greatest writer in the English language and the world's pre-eminent dramatist. He is often called England's national poet and the "Bard of Avon"...
.

Since the end of World War II
World War II
World War II, or the Second World War , was a global conflict lasting from 1939 to 1945, involving most of the world's nations—including all of the great powers—eventually forming two opposing military alliances: the Allies and the Axis...
and beginning in 1945 Erich Engel
Erich Engel
Erich Engel was a German film and theatre director.- Biography :Engel was born in Hamburg, where later he studied at the School of Applied Arts...
(1945-1947), Hans Schweikart
Hans Schweikart
Hans Schweikart was a German film director, actor and screenwriter. He directed 28 films between 1938 and 1968. He wrote for the film The Marriage of Mr. Mississippi, which was entered into the 11th Berlin International Film Festival.-Selected filmography:* The Comedians * The Marriage of Mr...
(1947-1963), August Everding
August Everding
August Everding was a German opera director and administrator. He studied at the Universities of Bonn and Munich, where launching his career in the 1950s...
(1963-1973), Hans-Reinhard Müller (1973-1983), Dieter Dorn
Dieter Dorn
Dieter Dorn is a German theatre director, also for the opera, the manager of the Münchner Kammerspiele from 1983 to 2001 and now manager of the Bavarian Staatsschauspiel.- Biography :...
(1983-2001) and Frank Baumbauer
Frank Baumbauer
Frank Baumbauer is an award-winning German theater director and artistic director active in the German theater community. He is the son of German casting agent Erna Baumbauer. Baumbauer was from 2001 - 2009 the director of the Munich Kammerspiele.-External links:...
(2001-2009) were managers of the Kammerspiele. In 2010 Johan Simons
Johan Simons
Johan Simons is a Dutch theater director.Simons received his education at the Rotterdam Dance Academy and the Maastricht Academy of Dramatic Arts. He also taught directing in Maastricht for a number of years....
was appointed artistic director.