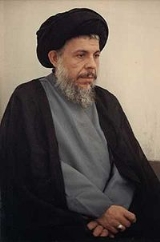 His father died in 1937, leaving the family penniless. In 1945 the family moved to the holy city of Najaf
Najaf
Najaf is a city in Iraq about 160 km south of Baghdad. Its estimated population in 2008 is 560,000 people. It is the capital of Najaf Governorate...
, where al-Sadr would spend the rest of his life. He was a child prodigy
Child prodigy
A child prodigy is someone who, at an early age, masters one or more skills far beyond his or her level of maturity. One criterion for classifying prodigies is: a prodigy is a child, typically younger than 18 years old, who is performing at the level of a highly trained adult in a very demanding...
who, at ten, was delivering lectures on Islamic history, and at eleven, he studied logic
Logic
In philosophy, Logic is the formal systematic study of the principles of valid inference and correct reasoning. Logic is used in most intellectual activities, but is studied primarily in the disciplines of philosophy, mathematics, semantics, and computer science...
and wrote a book to refute philosophy
Philosophy
Philosophy is the study of general and fundamental problems, such as those connected with existence, knowledge, values, reason, mind, and language. Philosophy is distinguished from other ways of addressing such problems by its critical, generally systematic approach and its reliance on rational...
. Muhammad Baqir al-Sadr completed his religious teachings at religious seminaries under al-Khoei and Muhsin al-Hakim at the age of 25 and began teaching.

He also worked with Sayyid Mohammed Baqir al-Hakim
Mohammed Baqir al-Hakim
Ayatollah Sayed Mohammad Baqir al-Hakim , also known as Shaheed al-Mehraab was one of the foremost Twelver Shi'a Muslim leaders in Iraq until his assassination in a bombing in Najaf...
in forming an Islamist movement in Iraq. This attracted the attention of the Baath Party
Baath Party
The Arab Socialist Ba'ath Party was a political party mixing Arab nationalist and Arab socialist interests, opposed to Western imperialism, and calling for the renaissance or resurrection and unification of the Arab world into a single state. Ba'ath is also spelled Ba'th or Baath and means...
, which resulted in numerous imprisonments for the Ayatollah. He was often subjugated to torture during his imprisonments, but continued his work after being released. One of the founders of modern Islamist thought he is credited with first developing the notion, later put in operation in Iran, of having western style democratic elections, but with a body of Muslim scholars to ensure all laws corresponded with Islamic teachings.

In 1977, he was sentenced to life in prison following uprisings in Najaf, but was released two years later due to his immense popularity. Upon his release however, he was put under house arrest. In 1980, after writing in the defense of the Islamic Revolution
Iranian Revolution
The Iranian Revolution refers to events involving the overthrow of Iran's monarchy under Shah Mohammad Reza Pahlavi and its replacement with an Islamic republic under Ayatollah Ruhollah Khomeini, the leader of the...
, Sadr was once again imprisoned, tortured, and executed by the regime of Saddam Hussein
Saddam Hussein
Saddam Hussein Abd al-Majid al-Tikriti was the fifth President of Iraq, serving in this capacity from 16 July 1979 until 9 April 2003...
. His sister, Amina Sadr bint al-Huda, was also imprisoned, tortured, and executed. It has been alleged that Sadr was killed by having an iron nail hammered into his head and then being set on fire.

Mohammad Baqir Al-Sadr's political philosophy, known as Wilayat Al-Umma (Governance of the people), set out his view of a modern day Islamic state. Using his mastery of the Quran and his innovative subject-based approach to Quranic exegesis, Al-Sadr extracted two concepts from the Holy text in relation to governance: khilafat al-insan (Man as heir or trustee of God) and shahadat al-anbiya (Prophets as witnesses). Al-Sadr explained that throughout history there have been '…two lines. Man’s line and the Prophet’s line. The former is the khalifa (trustee) who inherits the earth from God; the latter is the shahid (witness).'.

Al-Sadr demonstrated that khilafa (governance) is ‘a right given to the whole of humanity’ and explained it to be an obligation given from God to the human race to ‘tend the globe and administer human affairs’. This was a major advancement of Islamic political theory. Al-Sadr stated that the legitimacy of a government in an Islamic state comes from the people, and not from the clerics. Al-Sadr explained that throughout history there have been '…two lines. Man’s line and the Prophet’s line. The former is the khalifa (trustee) who inherits the earth from God; the latter is the shahid (witness)'.

While Al-Sadr identified khilafa as the obligation and right of the people, he used a broad-based exegesis of a Quranic verse to identify who held the responsibility of shahada in an Islamic state: First, the Prophets (anbiya’); second, the Imams, who are considered a divine (rabbani) continuation of the Prophets in this line; and lastly the marja’iyya (see Marja
Marja
Marja , also known as a marja-i taqlid or marja dini , literally means "Source to Imitate/Follow" or "Religious Reference"...
).

While the two functions of khilafa (governance) and shahada (martyrism; supervision) were united during the times of the Prophets, the two diverged during the occultation
The Occultation
The Occultation in Shia Islam refers to a belief that the messianic figure, or Mahdi, who in Shi'i thought is an infallible male descendant of the founder of Islam, Muhammad, was born but disappeared, and will one day return and fill the world with justice. Some Shi'is, such as the Zaidi and...
so that khilafa returned to the people (umma) and shahada to the scholars.

'Islamic theory rejects monarchy as well as the various forms of dictatorial government; it also rejects the aristocratic regimes and proposes a form of government, which contains all the positive aspects of the democratic system.'

He continued to champion this point until his final days:

'Lastly, I demand, in the name of all of you and in the name of the values you uphold, to allow the people the opportunity truly to exercise their right in running the affairs of the country by holding elections in which a council representing the ummah (people) could truly emerge.'

Al-Sadr was executed by Saddam Hussein
Saddam Hussein
Saddam Hussein Abd al-Majid al-Tikriti was the fifth President of Iraq, serving in this capacity from 16 July 1979 until 9 April 2003...
in 1980 before he was able to provide any details of the mechanism for the practical application of the shahada (martyrism) concept in an Islamic state. A few elaborations of shahada can be found in Al-Sadr’s works.

In his text ‘Role of the Shiah Imams in the reconstruction of Islamic society’, Al-Sadr illustrates the scope and limitations of shahada by using the example of the third Shi’i Imam, Hussein ibn Ali (the grandson of the Prophet), who stood up to Yazid
Yazid
-Given name:* Yazid I , second Umayyad Caliph upon succeeding his father Muawiyah* Yazid II, Umayyad caliph* Yazid III, Umayyad caliph* Yazid Kaïssi, French-born Moroccan footballer* Yazid Mansouri, French-born Algerian footballer...
, the ruler at the time. Al-Sadr explains Yazid was not simply going against Islamic teachings, as many rulers before and after him had done, but he was distorting the teachings and traditions of Islam and presenting his deviated ideas as Islam itself. This, therefore, is what led Imam Hussein to intervene to challenge Yazid in order to restore the true teachings of Islam, and as a consequence laid down his own life. In Al-Sadr’s own words, the shahid’s (witness – person performing shahada or supervision) duties are ‘to protect the correct doctrines and to see that deviations do not grow to the extent of threatening the ideology itself'.

Al-Sadr has one son, Jaafar, who finished his Islamic studies in Qum but decided to serve his country Iraq as a politician. Jaafar does not believe in religious states, he believes that a "civil state" in Iraq should not contradict with religions but on the contrary "a fair and just regime should be able to earn the blessing of religions". He doesn't believe in taking revenge for his father's brutal assassination "Re-building a unified, democratic and stable Iraq is the only way for taking that revenge". Jaafar Al-Sadr is a very promising Iraqi figure, he is intentioned to translate his father's visions in a modern and progressive way.


Fundamentals of the law
Usul al-fiqh
Uṣūl al-fiqh is the study of the origins, sources, and principles upon which Islamic jurisprudence is based. In the narrow sense, it simply refers to the question of what are the sources of Islamic law...


Logic
Logic
In philosophy, Logic is the formal systematic study of the principles of valid inference and correct reasoning. Logic is used in most intellectual activities, but is studied primarily in the disciplines of philosophy, mathematics, semantics, and computer science...


Economics
Economics
Economics is the social science that analyzes the production, distribution, and consumption of goods and services. The term economics comes from the Ancient Greek from + , hence "rules of the house"...


Qur'anic commentaries
Tafsir
Tafseer is the Arabic word for exegesis or commentary, usually of the Qur'an. Ta'wīl is a subset of tafsir and refers to esoteric or mystical interpretation. An author of tafsir is a mufassir .- Etymology :...


History
History
History is the discovery, collection, organization, and presentation of information about past events. History can also mean the period of time after writing was invented. Scholars who write about history are called historians...


Articles
Article (publishing)
An article is a written work published in a print or electronic medium. It may be for the purpose of propagating the news, research results, academic analysis or debate.-News articles:...