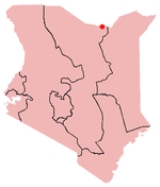 Encyclopedia
Moyale is a market town
Market town
Market town or market right is a legal term, originating in the medieval period, for a European settlement that has the right to host markets, distinguishing it from a village and city...
on the border of Ethiopia
Ethiopia
Ethiopia , officially known as the Federal Democratic Republic of Ethiopia, is a country located in the Horn of Africa. It is the second-most populous nation in Africa, with over 82 million inhabitants, and the tenth-largest by area, occupying 1,100,000 km2...
and Kenya
Kenya
Kenya , officially known as the Republic of Kenya, is a country in East Africa that lies on the equator, with the Indian Ocean to its south-east...
, which is split between the two countries: the larger portion is in Ethiopia (in the Oromia Region
Oromia Region
Oromia is one of the nine ethnic divisions of Ethiopia...
), and the smaller is in Kenya (the capital of the Moyale District
Moyale District
Moyale District is an administrative district in the Eastern Province of Kenya. Its capital town is Moyale. It has population of 53,479 and an area of 9,390 km² . The district has only one local authority, Moyale county council. The district has one electoral constituency, the Moyale Constituency.-...
). There are four disputed locations within the Moyale district between the Somali and Oromo regions.

Moyale is the main border post on the Nairobi
Nairobi
Nairobi is the capital and largest city of Kenya. The city and its surrounding area also forms the Nairobi County. The name "Nairobi" comes from the Maasai phrase Enkare Nyirobi, which translates to "the place of cool waters". However, it is popularly known as the "Green City in the Sun" and is...
-Addis Ababa
Addis Ababa
Addis Ababa is the capital city of Ethiopia...
road, lying north of the Dide Galgalu Desert. It is known for its traditional architecture.

An early settler at Moyale was a Greek
Greeks in Ethiopia
The Greek community in Ethiopia today numbers about 500 persons and can be traced back to the 18th century. It is mainly located in the capital, Addis Ababa, and the city of Dire Dawa.-History:The name Ethiopia itself is Greek and means "of burned face"...
by the name of Zaphiro, who had a station which he had named "Fort Harrington". When C.W. Gwynn visited in 1908, Zaphiro's station consisted of a garden that covered several acres and his house, located on a spur projecting from the Boran highlands, and providing access through the line of cliffs that run along the border. "This route may well become some day a considerable trade artery," Gwynn predicted. "Fort Harrington is therefore well placed as a healthy administrative post and as a possible commercial centre."

During World War II
World War II
World War II, or the Second World War , was a global conflict lasting from 1939 to 1945, involving most of the world's nations—including all of the great powers—eventually forming two opposing military alliances: the Allies and the Axis...
, both parts of the town was captured by Italians from Ethiopia
Ethiopia
Ethiopia , officially known as the Federal Democratic Republic of Ethiopia, is a country located in the Horn of Africa. It is the second-most populous nation in Africa, with over 82 million inhabitants, and the tenth-largest by area, occupying 1,100,000 km2...
in 1940, and retaken by the British on 15 July 1941. Tensions rose in the Kenyan side of Moyale in early 1999, after an Imam
Imam
An imam is an Islamic leadership position, often the worship leader of a mosque and the Muslim community. Similar to spiritual leaders, the imam is the one who leads Islamic worship services. More often, the community turns to the mosque imam if they have a religious question...
was shot dead during an Ethiopian raid across the Ethiopian-Kenyan border in pursuit of rebels of the Oromo Liberation Front
Oromo Liberation Front
The Oromo Liberation Front , or OLF, is an organization established in 1973 by Oromo nationalists to promote self-determination for the Oromo people against what they call "Abyssinian colonial rule". It has been outlawed and labeled as a terrorist organization by the Ethiopian government...
(OLF). The Kenyan residents of the town, held demonstrations condemning the action, which they attributed to Ethiopian security men who believed he was a sympathizer of the OLF.

In November 2009, Ethiopian Prime Minister Meles Zenawi
Meles Zenawi
Meles Zenawi Asres is the Prime Minister of Ethiopia. Since 1985, he has been chairman of the Tigrayan Peoples' Liberation Front , and is currently head of the ruling Ethiopian People's Revolutionary Democratic Front .Meles was born in Adwa, Tigray in Northern Ethiopia, to an Ethiopian father from...
announced plans to extend the Ethiopian railroad to Moyale. This would facilitate Kenyan plans, which at the time were at an advanced stage, to develop the port of Lamu
Lamu
-Threats to Lamu:In a 2010 report titled Saving Our Vanishing Heritage, Global Heritage Fund identified Lamu as one of 12 worldwide sites most "On the Verge" of irreparable loss and damage, citing insufficient management and development pressure as primary causes.- See also :* Juma and the Magic...
and connect it to the Kenyan side of Moyale with a tarmac road.

For the Ethiopian share of Moyale, based on figures from the Central Statistical Agency
Central Statistical Agency (Ethiopia)
The Central Statistical Agency is an agency of the government of Ethiopia designated to provide all surveys and censuses for that country used to monitor economic and social growth, as well as to act as an official training center in that field. It is part of the Ethiopian Ministry of Finance and...
in 2005, it has an estimated total population of 25,038 of whom 13,665 are men and 11,373 are women. The 1994 Ethiopian census reported that the Ethiopian side of Moyale had a total population of 13,962, of whom 7,411 were men and 6,551 were women. (This total also includes an estimate for parts of the town of Moyale, which were not counted; for these parts of the town, it was estimated there were 3,419 inhabitants, of whom 1,752 were men and 1,667 were women.) The five largest ethnic groups reported in Moyale were the Oromo
Oromo people
The Oromo are an ethnic group found in Ethiopia, northern Kenya, .and parts of Somalia. With 30 million members, they constitute the single largest ethnic group in Ethiopia and approximately 34.49% of the population according to the 2007 census...
(37.94%), the Burji (16.85%), the Amhara
Amhara people
Amhara are a highland people inhabiting the Northwestern highlands of Ethiopia. Numbering about 19.8 million people, they comprise 26% of the country's population, according to the 2007 national census...
(16.42%), the Welayta
Welayta people
Wolayta is the name of an ethnic group and its former kingdom, located in southern Ethiopia. According to the most recent census , they number 1.7 million people or 2.31 percent of the country's population, of whom 289,707 are urban inhabitants...
(4.82%), and the Silt'e
Silt'e people
The Silt'e people are an ethnic group in southern Ethiopia. They inhabit today's Silt'e Zone which is part of the Southern Nations, Nationalities and Peoples Region. A considerable number of Silt'e live in Addis Ababa, Adama and other cities and smaller urban centres of southern Ethiopia where...
(4.28%); all other ethnic groups made up 19.69% of the population. Other groups reported in Moyale include the Borana Oromo and the Garre Somali
Garre
The Garre are a Somali pastoralist clan who live in Somalia, Kenya, and Ethiopia. They are sub-clan of the Digil clan. Almost all speak the Garre language, though it may be secondary to the Maay speaking sub-clan of Darrawe who speak Maay as their first language. Their urban centers include...
. Oromiffa
Oromo language
Oromo, also known as Afaan Oromo, Oromiffa, Afan Boran, Afan Orma, and sometimes in other languages by variant spellings of these names , is an Afro-Asiatic language, and the most widely spoken of the Cushitic family. Forms of Oromo are spoken as a first language by more than 25 million Oromo and...
was spoken as a first language by 49.53%, 21.76% spoke Amharic
Amharic language
Amharic is a Semitic language spoken in Ethiopia. It is the second most-spoken Semitic language in the world, after Arabic, and the official working language of the Federal Democratic Republic of Ethiopia. Thus, it has official status and is used nationwide. Amharic is also the official or working...
, 9.96% spoke Burji
Burji language
Burji language is an Afro-Asiatic language spoken by the Burji people who reside in Ethiopia south of Lake Chamo. There are over 46,000 speakers in Ethiopia, and a further 10,400 speakers in Kenya...
, 3.96% spoke Welayta
Welayta language
Wolaytta is an Omotic language spoken in the Wolaita Zone and some parts of the Southern Nations, Nationalities, and People's Region of Ethiopia. The number of speakers of this language is estimated at 2,000,000 ; it is the native language of the Welayta people...
, and 3.62% spoke Silt'e
Silt'e language
Silt'e is a Semitic language spoken in central Ethiopia, mainly within the Silte Zone, in the Southern Nations, Nationalities, and People's Region and by speakers of the language , who have settled in Ethiopian cities, especially Addis Ababa.-Speakers and dialects:Dialects of the language include:...
; the remaining 11.17% spoke all other primary languages reported.