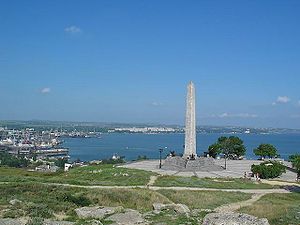 Mount Mithridat, located at the city center of Kerch
Kerch
Kerch is a city on the Kerch Peninsula of eastern Crimea, an important industrial, transport and tourist centre of Ukraine. Kerch, founded 2600 years ago, is considered as one of the most ancient cities in Ukraine.-Ancient times:...
, Ukraine
Ukraine
Ukraine is a country in Eastern Europe. It has an area of 603,628 km², making it the second largest contiguous country on the European continent, after Russia...
, was one of the nominees for the seven wonders of Ukraine
Seven Wonders of Ukraine
The Seven Wonders of Ukraine are the seven historical and cultural monuments of Ukraine, which were chosen in the Seven Wonders of Ukraine contest held in July, 2007...
. To the top of the mountain with the height of over 90 m (91.4 m) leads the Great Mithridates Staircase in a series of flights and balustraded terraces, which was built in 1833-40 by the Italian architect Alexander Digbi. A well-built road goes all the way to the top.

From the top of the mountain spreads a scenic outlook across the Strait of Kerch
Strait of Kerch
The Kerch Strait connects the Black Sea and the Sea of Azov, separating the Kerch Peninsula in the west from the Taman Peninsula in the east. The strait is to wide and up to deep....
and the city. Sometimes it is possible to see the Caucasus shore. In the 19th century a museum was erected on the top of the mountain in the form of a Greek temple, but it was destroyed during the Crimean War
Crimean War
The Crimean War was a conflict fought between the Russian Empire and an alliance of the French Empire, the British Empire, the Ottoman Empire, and the Kingdom of Sardinia. The war was part of a long-running contest between the major European powers for influence over territories of the declining...
. In 1944 the obelisk was built to commemorate the soldiers that defended Kerch in World War II
World War II
World War II, or the Second World War , was a global conflict lasting from 1939 to 1945, involving most of the world's nations—including all of the great powers—eventually forming two opposing military alliances: the Allies and the Axis...
.
The source of this article is wikipedia, the free encyclopedia.  The text of this article is licensed under the GFDL.