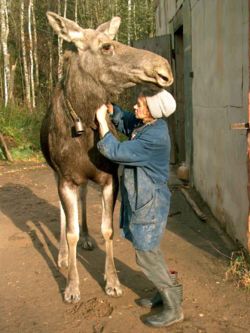 Moose milk, also known as elk milk, refers to milk
Milk
Milk is a white liquid produced by the mammary glands of mammals. It is the primary source of nutrition for young mammals before they are able to digest other types of food. Early-lactation milk contains colostrum, which carries the mother's antibodies to the baby and can reduce the risk of many...
produced by moose
Moose
The moose or Eurasian elk is the largest extant species in the deer family. Moose are distinguished by the palmate antlers of the males; other members of the family have antlers with a dendritic configuration...
(Alces alces). Though it is most commonly consumed by baby moose, its production has also been commercialised in Russia
Russia
Russia or , officially known as both Russia and the Russian Federation , is a country in northern Eurasia. It is a federal semi-presidential republic, comprising 83 federal subjects...
and Sweden
Sweden
Sweden , officially the Kingdom of Sweden , is a Nordic country on the Scandinavian Peninsula in Northern Europe. Sweden borders with Norway and Finland and is connected to Denmark by a bridge-tunnel across the Öresund....
.

Moose milk is high in butterfat
Butterfat
Butterfat or milkfat is the fatty portion of milk. Milk and cream are often sold according to the amount of butterfat they contain.- Composition :The fatty acids of butterfat are typically composed as follows :...
(10%) and solids (21.5%), according to data collected on Russian moose; research into American
North America
North America is a continent wholly within the Northern Hemisphere and almost wholly within the Western Hemisphere. It is also considered a northern subcontinent of the Americas...
moose milk is in a less advanced state than in Russia, but appears to indicate that American moose have even higher concentrations of solids in their milk. Moose lactate
Lactation
Lactation describes the secretion of milk from the mammary glands and the period of time that a mother lactates to feed her young. The process occurs in all female mammals, however it predates mammals. In humans the process of feeding milk is called breastfeeding or nursing...
between June and August; conditional on a good supply of high quality forage, nutrient and fat concentrations in the milk typically increase during the first twenty-five days of lactation, which are considered the peak period; nutrients, fat, and mineral element concentrations decrease for the remainder of the lactation period. However, compared to cow milk, moose milk still has much higher levels of aluminium
Aluminium
Aluminium or aluminum is a silvery white member of the boron group of chemical elements. It has the symbol Al, and its atomic number is 13. It is not soluble in water under normal circumstances....
, iron
Iron
Iron is a chemical element with the symbol Fe and atomic number 26. It is a metal in the first transition series. It is the most common element forming the planet Earth as a whole, forming much of Earth's outer and inner core. It is the fourth most common element in the Earth's crust...
, selenium
Selenium
Selenium is a chemical element with atomic number 34, chemical symbol Se, and an atomic mass of 78.96. It is a nonmetal, whose properties are intermediate between those of adjacent chalcogen elements sulfur and tellurium...
, and zinc
Zinc
Zinc , or spelter , is a metallic chemical element; it has the symbol Zn and atomic number 30. It is the first element in group 12 of the periodic table. Zinc is, in some respects, chemically similar to magnesium, because its ion is of similar size and its only common oxidation state is +2...
.