Encyclopedia
Monumental masonry is a kind of stonemasonry
Stonemasonry
The craft of stonemasonry has existed since the dawn of civilization - creating buildings, structures, and sculpture using stone from the earth. These materials have been used to construct many of the long-lasting, ancient monuments, artifacts, cathedrals, and cities in a wide variety of cultures...
focussed on the creation, installation and repairs of headstones (also known as gravestones and tombstones) and other memorials.

In Christian cultures, many families choose to mark the site of a burial
Burial
Burial is the act of placing a person or object into the ground. This is accomplished by excavating a pit or trench, placing an object in it, and covering it over.-History:...
of a family member with a gravestone. Typically the gravestone is engraved with information about the deceased person, usually including their name and date of death. Additional information may include date of birth, place of birth, place of birth, and relationships to other people (usually parents, spouses and/or children). Sometimes a verse from the Bible
Bible
The Bible refers to any one of the collections of the primary religious texts of Judaism and Christianity. There is no common version of the Bible, as the individual books , their contents and their order vary among denominations...
or a short poem is included, generally on a theme relating to love
Love
Love is an emotion of strong affection and personal attachment. In philosophical context, love is a virtue representing all of human kindness, compassion, and affection. Love is central to many religions, as in the Christian phrase, "God is love" or Agape in the Canonical gospels...
, death
Death
Death is the permanent termination of the biological functions that sustain a living organism. Phenomena which commonly bring about death include old age, predation, malnutrition, disease, and accidents or trauma resulting in terminal injury....
, grief
Grief
Grief is a multi-faceted response to loss, particularly to the loss of someone or something to which a bond was formed. Although conventionally focused on the emotional response to loss, it also has physical, cognitive, behavioral, social, and philosophical dimensions...
, or heaven
Heaven
Heaven, the Heavens or Seven Heavens, is a common religious cosmological or metaphysical term for the physical or transcendent place from which heavenly beings originate, are enthroned or inhabit...
.

The headstone is typically arranged after the burial. The choice of materials (typically a long-lasting kind of stone, such as marble
Marble
Marble is a metamorphic rock composed of recrystallized carbonate minerals, most commonly calcite or dolomite.Geologists use the term "marble" to refer to metamorphosed limestone; however stonemasons use the term more broadly to encompass unmetamorphosed limestone.Marble is commonly used for...
or granite
Granite
Granite is a common and widely occurring type of intrusive, felsic, igneous rock. Granite usually has a medium- to coarse-grained texture. Occasionally some individual crystals are larger than the groundmass, in which case the texture is known as porphyritic. A granitic rock with a porphyritic...
) and the style and wording of the inscription is negotiated between the monumental mason and the family members. Because of the emotional significance of the headstone to the family members, monumental masons have to be especially sensitive in their dealings with family members, especially in relation to the trade-off between expectations and cost..

Unlike the work of most stonemasons
Stonemasonry
The craft of stonemasonry has existed since the dawn of civilization - creating buildings, structures, and sculpture using stone from the earth. These materials have been used to construct many of the long-lasting, ancient monuments, artifacts, cathedrals, and cities in a wide variety of cultures...
, the work of the monumental mason is of small size, often just a small slab of stone, but generally with a highly detailed finish. Generally gravestones are highly polished with detailed engraving of text and symbols. Some memorials are more elaborate and may involve the sculpture
Sculpture
Sculpture is three-dimensional artwork created by shaping or combining hard materials—typically stone such as marble—or metal, glass, or wood. Softer materials can also be used, such as clay, textiles, plastics, polymers and softer metals...
of symbols associated with death, such as angels, hands joined in prayer
Prayer
Prayer is a form of religious practice that seeks to activate a volitional rapport to a deity through deliberate practice. Prayer may be either individual or communal and take place in public or in private. It may involve the use of words or song. When language is used, prayer may take the form of...
, and vases of flowers. Some specially-made stones feature artistic lettering by letter cutters
Letter cutting
Letter cutting is a form of inscriptional architectural lettering closely related to monumental masonry and stone carving, often practiced by artists, sculptors and typeface designers. Rather than traditional stone carving, where images and symbols are the dominant features, in letter cutting it is...
.

With respect to gravestone or headstone
Headstone
A headstone, tombstone, or gravestone is a marker, usually stone, that is placed over a grave. In most cases they have the deceased's name, date of birth, and date of death inscribed on them, along with a personal message, or prayer.- Use :...
memorials, the consideration of choosing a suitable monumental mason is paramount. There are numerous masons operating, however varying in style, expertise, cost, and more importantly quality. The decision should therefore be based on the personal needs of the customer while considering: the long term outcomes for lower quality granite
Granite
Granite is a common and widely occurring type of intrusive, felsic, igneous rock. Granite usually has a medium- to coarse-grained texture. Occasionally some individual crystals are larger than the groundmass, in which case the texture is known as porphyritic. A granitic rock with a porphyritic...
, reading the fine points of a particular quote, and attaining more than one quote. 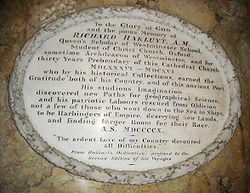