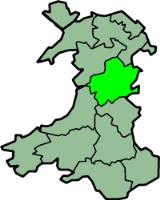 Montgomeryshire constitutes the northern part of the principal area of Powys
Powys
Powys is a local-government county and preserved county in Wales.-Geography:Powys covers the historic counties of Montgomeryshire and Radnorshire, most of Brecknockshire , and a small part of Denbighshire — an area of 5,179 km², making it the largest county in Wales by land area.It is...
(except a few communities added to Powys in 1996 that are within the historic boundaries of Denbighshire
Denbighshire (historic)
Historic Denbighshire is one of thirteen traditional counties in Wales, a vice-county and a former administrative county, which covers an area in north east Wales...
). The population of this Montgomeryshire area was 59,474 according to the 2001 census
United Kingdom Census 2001
A nationwide census, known as Census 2001, was conducted in the United Kingdom on Sunday, 29 April 2001. This was the 20th UK Census and recorded a resident population of 58,789,194....
.

Montgomery
Montgomery, Powys
The historic county town of Montgomery in Powys, Wales lies just three miles from the English border in the Welsh Marches. It is best known for its castle, Montgomery Castle, begun in 1223, and its parish church, begun in 1227. However its origins go back much further, as seen by the Celtic Iron...
is considered the county town
County town
A county town is a county's administrative centre in the United Kingdom or Ireland. County towns are usually the location of administrative or judicial functions, or established over time as the de facto main town of a county. The concept of a county town eventually became detached from its...
, though the administrative functions were shared with Machynlleth
Machynlleth
Machynlleth is a market town in Powys, Wales. It is in the Dyfi Valley at the intersection of the A487 and the A489 roads.Machynlleth was the seat of Owain Glyndŵr's Welsh Parliament in 1404, and as such claims to be the "ancient capital of Wales". However, it has never held any official...
. The borders of Montgomeryshire correspond roughly to the medieval kingdom of Powys Wenwynwyn
Powys Wenwynwyn
Powys Wenwynwyn or Powys Cyfeiliog was the southern portion of the former princely state of Powys which split following the death of Madog ap Maredudd of Powys in 1160...
. It is also the birth place of Saint Richard Gwyn
Saint Richard Gwyn
Saint Richard Gwyn , also known by his anglicised name, Richard White, was a Welsh school teacher. He was martyred by being hanged, drawn and quartered for high treason in 1584. He was canonised by Pope Paul VI in 1970 as one of the Forty Martyrs of England and Wales...
.

The county is bounded to the north by Denbighshire
Denbighshire (historic)
Historic Denbighshire is one of thirteen traditional counties in Wales, a vice-county and a former administrative county, which covers an area in north east Wales...
, to the east and south east by Shropshire
Shropshire
Shropshire is a county in the West Midlands region of England. For Eurostat purposes, the county is a NUTS 3 region and is one of four counties or unitary districts that comprise the "Shropshire and Staffordshire" NUTS 2 region. It borders Wales to the west...
, to the south by Radnorshire
Radnorshire
Radnorshire is one of thirteen historic and former administrative counties of Wales. It is represented by the Radnorshire area of Powys, which according to the 2001 census, had a population of 24,805...
, to the south west by Cardiganshire
Ceredigion
Ceredigion is a county and former kingdom in mid-west Wales. As Cardiganshire , it was created in 1282, and was reconstituted as a county under that name in 1996, reverting to Ceredigion a day later...
and to the west and north west by Merionethshire
Merionethshire
Merionethshire is one of thirteen historic counties of Wales, a vice county and a former administrative county.The administrative county of Merioneth, created under the Local Government Act 1888, was abolished under the Local Government Act 1972 on April 1, 1974...
. It was formed under the Laws in Wales Acts 1535-1542
Laws in Wales Acts 1535-1542
The Laws in Wales Acts 1535 and 1542 were parliamentary measures by which the legal system of Wales was annexed to England and the norms of English administration introduced. The intention was to create a single state and a single legal jurisdiction; frequently referred to as England and Wales...
. Its cantrefi included:

The area is almost wholly mountainous, although there are some fertile valleys in the east. The highest point is Cadair Berwyn
Cadair Berwyn
Cadair Berwyn or Cader Berwyn is a mountain summit in north east Wales. It is the highest point in the Berwyn range, and the highest significant summit in Wales outside the National Parks. Cadair Berwyn and Cyrniau Nod to the west are the two Marilyns that form the Berwyn range.The mountain lies on...
at 2,723 ft (830 m). Its main rivers are the River Severn
River Severn
The River Severn is the longest river in Great Britain, at about , but the second longest on the British Isles, behind the River Shannon. It rises at an altitude of on Plynlimon, Ceredigion near Llanidloes, Powys, in the Cambrian Mountains of mid Wales...
and the River Dyfi
River Dyfi
The River Dyfi is a river in Mid Wales. The Dyfi estuary forms the border between the counties of Gwynedd and Ceredigion.- Source :...
. Lake Vyrnwy
Lake Vyrnwy
Lake Vyrnwy Nature Reserve and Estate is an area of land in Montgomeryshire, Powys, Wales, surrounding the Victorian reservoir of Lake Vyrnwy. Its stone-built dam, built in the 1880s, was the first of its kind in the world. The Nature Reserve and the area around it are jointly managed by the Royal...
is a reservoir supplying Liverpool
Liverpool
Liverpool is a city and metropolitan borough of Merseyside, England, along the eastern side of the Mersey Estuary. It was founded as a borough in 1207 and was granted city status in 1880...
.

The main towns are Llanfyllin
Llanfyllin
Llanfyllin is a small town in Powys, Mid Wales, United Kingdom.- Location, history and amenities :Llanfyllin's population at the date of the 2001 Census was 1,407. The town lies on the River Cain by the Berwyn Mountains in Montgomeryshire. It is known for its holy well, dedicated to Saint Myllin....
, Machynlleth
Machynlleth
Machynlleth is a market town in Powys, Wales. It is in the Dyfi Valley at the intersection of the A487 and the A489 roads.Machynlleth was the seat of Owain Glyndŵr's Welsh Parliament in 1404, and as such claims to be the "ancient capital of Wales". However, it has never held any official...
, Llanidloes
Llanidloes
Llanidloes is a town along the A470 road and B4518 road in Powys, within the historic county boundaries of Montgomeryshire , Mid Wales.It is the first town on the River Severn...
, Montgomery, Newtown and Welshpool
Welshpool
Welshpool is a town in Powys, Wales, or ancient county Montgomeryshire, from the Wales-England border. The town is low-lying on the River Severn; the Welsh language name Y Trallwng literally meaning 'the marshy or sinking land'...
. The main industries are agriculture
Agriculture
Agriculture is the cultivation of animals, plants, fungi and other life forms for food, fiber, and other products used to sustain life. Agriculture was the key implement in the rise of sedentary human civilization, whereby farming of domesticated species created food surpluses that nurtured the...
(mainly hill farming) and tourism
Tourism
Tourism is travel for recreational, leisure or business purposes. The World Tourism Organization defines tourists as people "traveling to and staying in places outside their usual environment for not more than one consecutive year for leisure, business and other purposes".Tourism has become a...
.

To walk up and down through Wales
Wales
Wales is a country that is part of the United Kingdom and the island of Great Britain, bordered by England to its east and the Atlantic Ocean and Irish Sea to its west. It has a population of three million, and a total area of 20,779 km²...
, following Offa's Dyke Path
Offa's Dyke Path
Offa's Dyke Path is a long distance footpath along the Welsh-English border. Opened in 1971, it is one of Britain's premier National Trails and draws walkers from throughout the world...
, the Marches Way
Marches Way
The Marches Way is a partially waymarked long distance footpath in the United Kingdom. It runs 351 kilometres / 218 miles through the Welsh–English borderlands, traditionally known as the Welsh Marches and links the cities of Chester in the north and Cardiff in the south.-The route:The route...
, the Cambrian Way
Cambrian Way
The Cambrian Way is a long distance footpath in Wales running from Cardiff to Conwy.-The route:The route is not waymarked. It therefore requires advanced map reading and navigational experience...
or Glyndŵr's Way one must at some point travel through Montgomeryshire as it is the only county that stretches from the English border to the Dovey
River Dyfi
The River Dyfi is a river in Mid Wales. The Dyfi estuary forms the border between the counties of Gwynedd and Ceredigion.- Source :...
estuary at Cardigan Bay, east to west.