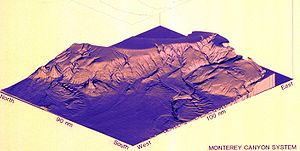 Monterey Canyon, or Monterey Submarine Canyon, is a submarine canyon
Submarine canyon
A submarine canyon is a steep-sided valley on the sea floor of the continental slope. Many submarine canyons are found as extensions to large rivers; however there are some that have no such association. Canyons cutting the continental slopes have been found at depths greater than 2 km below sea...
in Monterey Bay
Monterey Bay
Monterey Bay is a bay of the Pacific Ocean, along the central coast of California. The bay is south of San Francisco and San Jose, between the cities of Santa Cruz and Monterey....
, California
California
California is a state located on the West Coast of the United States. It is by far the most populous U.S. state, and the third-largest by land area...
. It is the subject of ongoing study by the scientists at the Monterey Bay Aquarium Research Institute
Monterey Bay Aquarium Research Institute
The Monterey Bay Aquarium Research Institute is a not-for-profit oceanographic research center in Moss Landing, California affiliated with the Monterey Bay Aquarium. It was founded in 1987 by David Packard of Hewlett-Packard fame...
, the Moss Landing Marine Laboratories
Moss Landing Marine Laboratories
The Moss Landing Marine Laboratories is a multi-campus marine research consortium headquartered at Moss Landing, California.-Organization:...
, and other oceanographic
Oceanography
Oceanography , also called oceanology or marine science, is the branch of Earth science that studies the ocean...
institutions.

Monterey Canyon begins at Moss Landing, California
Moss Landing, California
Moss Landing is a census-designated place in Monterey County, California, United States. Moss Landing is located on the Pajaro Valley Consolidated Railroad north-northeast of Monterey, at an elevation of 10 feet . As of the 2010 census, the CDP population was 204, down from 300 at the 2000...
, the middle of the Monterey Bay
Monterey Bay
Monterey Bay is a bay of the Pacific Ocean, along the central coast of California. The bay is south of San Francisco and San Jose, between the cities of Santa Cruz and Monterey....
, and extends 95 mi (152.9 km) into the Pacific Ocean
Pacific Ocean
The Pacific Ocean is the largest of the Earth's oceanic divisions. It extends from the Arctic in the north to the Southern Ocean in the south, bounded by Asia and Australia in the west, and the Americas in the east.At 165.2 million square kilometres in area, this largest division of the World...
where it terminates at the Monterey Canyon submarine fan, reaching depths of up to 3,600 m (11,800 ft) below surface level at its deepest. Though the canyon's bottom is about 2 miles below the surface, the actual canyon itself is only about 1 mile deep, making it of comparable depth to the Grand Canyon
Grand Canyon
The Grand Canyon is a steep-sided canyon carved by the Colorado River in the United States in the state of Arizona. It is largely contained within the Grand Canyon National Park, the 15th national park in the United States...
. It is a part of the greater Monterey Bay Canyon System, which consists of Monterey, Soquel and Carmel Canyons. The canyon's depth and nutrient availability (due to the regular influx of nutrient-rich sediment) provide a habitat suitable for many marine life forms.

One dominant theory holds that the canyon is a remnant of an ancient outlet of the Colorado River
Colorado River
The Colorado River , is a river in the Southwestern United States and northwestern Mexico, approximately long, draining a part of the arid regions on the western slope of the Rocky Mountains. The watershed of the Colorado River covers in parts of seven U.S. states and two Mexican states...
which existed before the Gulf of California
Gulf of California
The Gulf of California is a body of water that separates the Baja California Peninsula from the Mexican mainland...
opened up about 7.9 million years ago. Others believe it may represent the remnant outlet of a river draining the Central Valley, perhaps by way of the Los Angeles Basin. The canyon has moved north to its current location by the action of the San Andreas Fault
San Andreas Fault
The San Andreas Fault is a continental strike-slip fault that runs a length of roughly through California in the United States. The fault's motion is right-lateral strike-slip...
and would have been approximately where Santa Barbara
Santa Barbara, California
Santa Barbara is the county seat of Santa Barbara County, California, United States. Situated on an east-west trending section of coastline, the longest such section on the West Coast of the United States, the city lies between the steeply-rising Santa Ynez Mountains and the Pacific Ocean...
is located when both the San Andreas Fault and the Gulf of California came into being. Similar undersea canyons exist at the mouths of other large rivers around the world today, for instance, the Hudson River Canyon. As no major river lies at the head of Monterey Canyon today, it is surmised that it may have come into being when such a river did so in the past. The clues to its ancient origins lie somewhere at the base of the canyon in a huge sedimentary bed called the Monterey Fan. This fan appears to be far too massive to have accumulated from modern coastal streams. Research including core sampling is ongoing. Thus far, only "recent" sedimentary cores have been obtained. The oldest cores lie deeply buried, and remain to be probed.