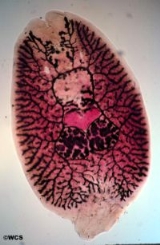 Encyclopedia
Monogenea are a group of largely ectoparasitic members of the flatworm phylum Platyhelminthes, class Monogenea.

Monogenea are very small parasitic flatworms mainly found on skin or gills of fish.
They are rarely longer than about 2 cm. A few species infecting certain marine fish are larger and marine forms are generally larger than those found on fresh water hosts.
Monogeneans lack respiratory, skeletal and circulatory systems and have no or weakly developed oral suckers.
Monogenea attach to hosts using hooks, clamps and a variety of other specialized structures. They are often capable of dramatically elongating and shortening as they move. Biologists need to ensure that specimens are completely relaxed before measurements are taken.

Like other flatworms, Monogenea have no true body cavity
Body cavity
By the broadest definition, a body cavity is any fluid-filled space in a multicellular organism. However, the term usually refers to the space located between an animal’s outer covering and the outer lining of the gut cavity, where internal organs develop...
(coelom). They have a simple digestive system consisting of a mouth opening with a muscular pharynx
Pharynx
The human pharynx is the part of the throat situated immediately posterior to the mouth and nasal cavity, and anterior to the esophagus and larynx. The human pharynx is conventionally divided into three sections: the nasopharynx , the oropharynx , and the laryngopharynx...
and an intestine with no terminal opening (anus
Anus
The anus is an opening at the opposite end of an animal's digestive tract from the mouth. Its function is to control the expulsion of feces, unwanted semi-solid matter produced during digestion, which, depending on the type of animal, may be one or more of: matter which the animal cannot digest,...
). Generally, they also are hermaphroditic with functional reproductive organs of both sexes occurring in one individual. Most species are oviparous but a few are viviparous. Monogenea are Platyhelminthes and therefore are among the lowest invertebrates to possess three embryonic germ layers—endoderm, mesoderm, and ectoderm. In addition, they have a head region that contains concentrated sense organs and nervous tissue (brain).

There are about 50 families
Family (biology)
In biological classification, family is* a taxonomic rank. Other well-known ranks are life, domain, kingdom, phylum, class, order, genus, and species, with family fitting between order and genus. As for the other well-known ranks, there is the option of an immediately lower rank, indicated by the...
and thousands of described species.

Monopistocotylea include:
All of which can cause epizootic
Epizootic
In epizoology, an epizootic is a disease that appears as new cases in a given animal population, during a given period, at a rate that substantially exceeds what is "expected" based on recent experience . Epidemic is the analogous term applied to human populations...
s in freshwater fish
Freshwater fish
Freshwater fish are fish that spend some or all of their lives in freshwater, such as rivers and lakes, with a salinity of less than 0.05%. These environments differ from marine conditions in many ways, the most obvious being the difference in levels of salinity...
when raised in aquaculture
Aquaculture
Aquaculture, also known as aquafarming, is the farming of aquatic organisms such as fish, crustaceans, molluscs and aquatic plants. Aquaculture involves cultivating freshwater and saltwater populations under controlled conditions, and can be contrasted with commercial fishing, which is the...
.

Monogeneans possess the simplest life cycle among the parasitic platyhelminths. They have no intermediate hosts and are ectoparasitic on fish (seldom in the urinary bladder
Urinary bladder
The urinary bladder is the organ that collects urine excreted by the kidneys before disposal by urination. A hollow muscular, and distensible organ, the bladder sits on the pelvic floor...
and rectum
Rectum
The rectum is the final straight portion of the large intestine in some mammals, and the gut in others, terminating in the anus. The human rectum is about 12 cm long...
of cold-blooded
Poikilotherm
A poikilotherm is an organism whose internal temperature varies considerably. It is the opposite of a homeotherm, an organism which maintains thermal homeostasis. Usually the variation is a consequence of variation in the ambient environmental temperature...
vertebrates). Although they are hermaphrodite
Hermaphrodite
In biology, a hermaphrodite is an organism that has reproductive organs normally associated with both male and female sexes.Many taxonomic groups of animals do not have separate sexes. In these groups, hermaphroditism is a normal condition, enabling a form of sexual reproduction in which both...
s, the male reproductive system becomes functional before the female part. The eggs hatch releasing a heavily ciliated larval stage known as an oncomiracidium. The oncomiracidium has numerous posterior hooks and is generally the life stage responsible for transmission from host to host.

No known monogeneans infect birds, but one (Oculotrema hippopotami) infects mammals, parasitizing the eye of the hippopotamus
Hippopotamus
The hippopotamus , or hippo, from the ancient Greek for "river horse" , is a large, mostly herbivorous mammal in sub-Saharan Africa, and one of only two extant species in the family Hippopotamidae After the elephant and rhinoceros, the hippopotamus is the third largest land mammal and the heaviest...
.