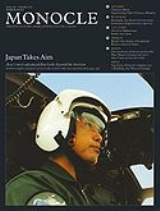 Encyclopedia
Monocle is a lifestyle magazine and website founded by Tyler Brûlé
Tyler Brûlé
Tyler Brûlé is a Canadian journalist, entrepreneur, and magazine publisher. He is the editor-in-chief of Monocle and a columnist for the Weekend FT.-Early years:...
, a Canadian
Canada
Canada is a North American country consisting of ten provinces and three territories. Located in the northern part of the continent, it extends from the Atlantic Ocean in the east to the Pacific Ocean in the west, and northward into the Arctic Ocean...
journalist and entrepreneur. Described by CBC News
CBC News
CBC News is the department within the Canadian Broadcasting Corporation responsible for the news gathering and production of news programs on CBC television, radio and online services...
reporter Harry Forestell as a "meeting between Foreign Policy
Foreign Policy
Foreign Policy is a bimonthly American magazine founded in 1970 by Samuel P. Huntington and Warren Demian Manshel.Originally, the magazine was a quarterly...
and Vanity Fair
Vanity Fair (magazine)
Vanity Fair is a magazine of pop culture, fashion, and current affairs published by Condé Nast. The present Vanity Fair has been published since 1983 and there have been editions for four European countries as well as the U.S. edition. This revived the title which had ceased publication in 1935...
", the magazine provides a globalist perspective on issues as fashion, international affairs and design. Hamilton Nolan, editor for Gawker, described Monocle magazine as "a lifestyle magazine for young, stylish, business-oriented jetsetters". It had also previously been described on Gawker as a "travel-culture magazine" and a repository of "lifestyle sensuality and gaywad uptightness".

The magazine launched on 15 February 2007, priced at 12 euro
Euro
The euro is the official currency of the eurozone: 17 of the 27 member states of the European Union. It is also the currency used by the Institutions of the European Union. The eurozone consists of Austria, Belgium, Cyprus, Estonia, Finland, France, Germany, Greece, Ireland, Italy, Luxembourg,...
s, 5 GPB, 10 USD  and features articles on subjects including the Japanese Maritime Self Defense Force, Chinese
People's Republic of China
China , officially the People's Republic of China , is the most populous country in the world, with over 1.3 billion citizens. Located in East Asia, the country covers approximately 9.6 million square kilometres...
investment in Africa
Africa
Africa is the world's second largest and second most populous continent, after Asia. At about 30.2 million km² including adjacent islands, it covers 6% of the Earth's total surface area and 20.4% of the total land area...
, and the best Portuguese-language
Portuguese language
Portuguese is a Romance language that arose in the medieval Kingdom of Galicia, nowadays Galicia and Northern Portugal. The southern part of the Kingdom of Galicia became independent as the County of Portugal in 1095...
Sunday newspapers. The subscription price is approximately $120 [£75] annually. In New Zealand, single issues sell for $18 each, in Japan for ¥2,310, in Switzerland for 20CHF and in Spain for 11€.

Monocle's website contains magazine archive content that is only available to paid subscribers. The Monocle website also contains films and documentaries that are available to the public - plus a daily news bulletin called Monocolumn written by the Monocle team and their correspondents.

The monocle website also hosts The Monocle Weekly, a weekly radio program/podcast, hosted by Tyler Brûlé
Tyler Brûlé
Tyler Brûlé is a Canadian journalist, entrepreneur, and magazine publisher. He is the editor-in-chief of Monocle and a columnist for the Weekend FT.-Early years:...
, Andrew Tuck and culture editor, Robert Bound discussing affairs and hot topics from around the globe. The show has been recorded in Tokyo, Stockholm, Rio, London and Sydney.

Part of the monocle website is dedicated to The Monocle Shop an e-commerce portal selling design and fashion collaborations that the Monocle brand has developed with the likes of Comme des Garçons, Delvaux, Kitsune, Orlebar Brown, Aspesi, and Malmsten. These products are also sold in Monocle shops in London, Los Angeles, Tokyo, Hong Kong and New York.

Andrew Tuck edits the magazine, and Richard Spencer Powell is the creative director. Monocle was due to launch its first TV show, broadcast internationally on Bloomberg on January 29, 2011.