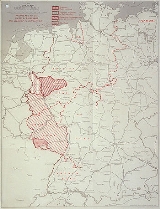 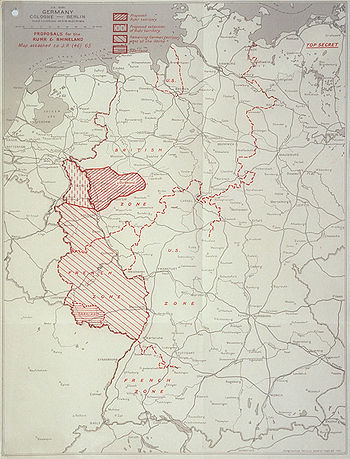 The Monnet plan was proposed by French civil servant Jean Monnet
Jean Monnet
Jean Omer Marie Gabriel Monnet was a French political economist and diplomat. He is regarded by many as a chief architect of European Unity and is regarded as one of its founding fathers...
after the end of World War II
World War II
World War II, or the Second World War , was a global conflict lasting from 1939 to 1945, involving most of the world's nations—including all of the great powers—eventually forming two opposing military alliances: the Allies and the Axis...
. It was a reconstruction plan for France
France
The French Republic , The French Republic , The French Republic , (commonly known as France , is a unitary semi-presidential republic in Western Europe with several overseas territories and islands located on other continents and in the Indian, Pacific, and Atlantic oceans. Metropolitan France...
that proposed giving France control over the German
Germany
Germany , officially the Federal Republic of Germany , is a federal parliamentary republic in Europe. The country consists of 16 states while the capital and largest city is Berlin. Germany covers an area of 357,021 km2 and has a largely temperate seasonal climate...
coal and steel areas of the Ruhr area
Ruhr Area
The Ruhr, by German-speaking geographers and historians more accurately called Ruhr district or Ruhr region , is an urban area in North Rhine-Westphalia, Germany. With 4435 km² and a population of some 5.2 million , it is the largest urban agglomeration in Germany...
and Saar
Saarland
Saarland is one of the sixteen states of Germany. The capital is Saarbrücken. It has an area of 2570 km² and 1,045,000 inhabitants. In both area and population, it is the smallest state in Germany other than the city-states...
and using these resources to bring France to 150% of pre-war industrial production. The plan was adopted by Charles de Gaulle
Charles de Gaulle
Charles André Joseph Marie de Gaulle was a French general and statesman who led the Free French Forces during World War II. He later founded the French Fifth Republic in 1958 and served as its first President from 1959 to 1969....
in early 1946. The plan would permanently limit Germany's industrial capacity. It would also ensure the use of Germany's resources for European reconstruction.

The early French plans were concerned with keeping Germany weak and strengthening the French economy at the expense of that of Germany. French foreign policy aimed to dismantle German heavy industry, place the coal rich Ruhr area
Ruhr Area
The Ruhr, by German-speaking geographers and historians more accurately called Ruhr district or Ruhr region , is an urban area in North Rhine-Westphalia, Germany. With 4435 km² and a population of some 5.2 million , it is the largest urban agglomeration in Germany...
and Rhineland
Rhineland
Historically, the Rhinelands refers to a loosely-defined region embracing the land on either bank of the River Rhine in central Europe....
under French control or at a minimum internationalize them, and also to join the coal-rich Saarland
Saarland
Saarland is one of the sixteen states of Germany. The capital is Saarbrücken. It has an area of 2570 km² and 1,045,000 inhabitants. In both area and population, it is the smallest state in Germany other than the city-states...
with the iron-rich province of Lorraine
Lorraine (province)
The Duchy of Upper Lorraine was an historical duchy roughly corresponding with the present-day northeastern Lorraine region of France, including parts of modern Luxembourg and Germany. The main cities were Metz, Verdun, and the historic capital Nancy....
(which had been handed over from Germany to France again in 1944). When American diplomats reminded the French of what a devastating effect this would have on the German economy, France's response was to suggest the Germans would just have to "make [the] necessary adjustments" to deal with the inevitable foreign exchange deficit.

The "Monnet plan" was in effect the first five-year plan for modernization and equipment, a plan for national economic reconstruction which drew heavily on earlier French plans to make France the largest steel producer in Europe. Monnet's aim was to modernize the French economy so as to make it internationally competitive, especially versus German exports. To carry out his plans he shaped the Planning Commissariat and entrenched it in the French bureaucracy. Germany was seen as a necessary tool for carrying out the plans. The planned steel production increases to 15 million tonnes of steel a year could only be achieved by replacing former German steel exports and increasing the imports of German coal and coke
Coke (fuel)
Coke is the solid carbonaceous material derived from destructive distillation of low-ash, low-sulfur bituminous coal. Cokes from coal are grey, hard, and porous. While coke can be formed naturally, the commonly used form is man-made.- History :...
, making control of this German resource vital.

French proposals for the area spanned by the German coalfields east of the Rhine had since late 1945, therefore, been to turn it into an International State with its own currency and customs and supervised by an International Authority which would include the US and France. Part of the reason for these proposals was in 1946 explained to the US by a French Foreign Office official: "With the aim of military security we prefer to increase French steel production and output to the detriment of the Ruhr."

The UK and the US were generally reluctant to acquiesce to the French demands, since they feared it would lead to increased Russian influence.

Monnet's memoirs show no hard evidence of an interest in European unity before April 1948, when he realized it was a central US objective. He then wrote to Schumann that to ward off the current dangers there was only one solution; it would "only be possible through the creation of a federation of the west".

In 1947 France detached the coal-rich Saar area from Germany and turned it into the Saar protectorate
Saar (protectorate)
The Saar Protectorate was a German borderland territory twice temporarily made a protectorate state. Since rejoining Germany the second time in 1957, it is the smallest Federal German Area State , the Saarland, not counting the city-states Berlin, Hamburg and Bremen...
under French economic control. The area returned to German administration on January 1, 1957, but France retained the right to mine from its coal mines until 1981.

As a protectorate, the Saar area was economically integrated with France and nominally politically independent although security and foreign policy was dictated from France. In addition, France maintained a High Commissioner
High Commissioner
High Commissioner is the title of various high-ranking, special executive positions held by a commission of appointment.The English term is also used to render various equivalent titles in other languages.-Bilateral diplomacy:...
in the Saar with wide-ranging powers. Parties advocating a return of the Saar to Germany were banned, with the consequence that West Germany did not recognize the democratic legality of the Saar government. In view of continued conflict between Germany and France over the future of the Saarland, efforts were made by the other Western European nations to find a solution to the potentially dangerous problem. Placed under increasing international pressure France finally agreed to a compromise. The Saar territory was to be Europeanised under the context of the Western European Union
Western European Union
The Western European Union was an international organisation tasked with implementing the Modified Treaty of Brussels , an amended version of the original 1948 Treaty of Brussels...
. France and Germany agreed in the Paris Agreements that until a peace treaty was signed with Germany, the Saar area would be governed under a "statute" that was to be supervised by a European Commission
European Commission
The European Commission is the executive body of the European Union. The body is responsible for proposing legislation, implementing decisions, upholding the Union's treaties and the general day-to-day running of the Union....
er who in turn would be responsible to the Council of Ministers of the Western European Union. The Saarland would however have to remain in economic union with France.

Despite the endorsement of the statute by West Germany, in the 1955 referendum amongst the Saarlanders that was needed for it to come into effect the statute was rejected by 67.7% of the population. Despite French pre-referendum assertions that a "no" to the statute would simply result in the Saarland remaining in its previous status as a French-controlled territory, the claim of the campaign group for a "no" to the statute that it would lead to unification with West Germany turned out to be correct. The Saarland was politically reintegrated with West Germany in 1 January 1957, but economic reintegration took many additional years. In return for agreeing to return the Saar, France demanded and gained the following concessions:

As one minor consequence of French efforts to Frenchify the territory, it was alone in the western occupied territories not to accept any refugees from the expulsions of Germans in the Eastern provinces
Expulsion of Germans after World War II
The later stages of World War II, and the period after the end of that war, saw the forced migration of millions of German nationals and ethnic Germans from various European states and territories, mostly into the areas which would become post-war Germany and post-war Austria...
and German settlements elsewhere in Eastern Europe. France did not wish to increase the German-speaking population in the territory. 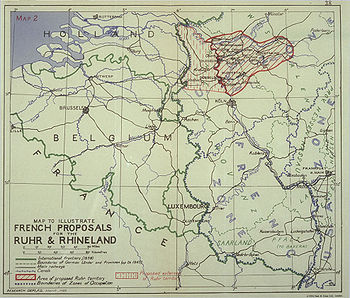 In September 1946 the US government stated in the Stuttgart speech Restatement of Policy on Germany
Restatement of Policy on Germany
"Restatement of Policy on Germany" is a famous speech by James F. Byrnes, the United States Secretary of State, held in Stuttgart on September 6, 1946.Also known as the "Speech of hope" it set the tone of future U.S...
that it would accept the French claims on the Saarland, but that: "the United States will not support any encroachment on territory which is indisputably German or any division of Germany which is not genuinely desired by the people concerned. So far as the United States is aware the people of the Ruhr area
Ruhr Area
The Ruhr, by German-speaking geographers and historians more accurately called Ruhr district or Ruhr region , is an urban area in North Rhine-Westphalia, Germany. With 4435 km² and a population of some 5.2 million , it is the largest urban agglomeration in Germany...
and the Rhineland
Rhineland
Historically, the Rhinelands refers to a loosely-defined region embracing the land on either bank of the River Rhine in central Europe....
desire to remain united with the rest of Germany. And the United States is not going to oppose their desire."

The U.S. was at this point in time becoming more concerned by the risk of Western Germany slipping into the communist camp, and a detachment of the Ruhr from Germany was seen as dangerous from that standpoint.

However, in 1949 the Ruhr Agreement was imposed on the (West) Germans as a pre-condition for permitting them to establish the Federal Republic of Germany. By controlling the production and distribution of coal and steel (i.e., how much coal and steel the Germans themselves would get), the International Authority for the Ruhr (IAR) in effect controlled the entire West German economy, much to the dismay of the Germans. They were however permitted to send their delegations to the authority after the Petersberg agreement
Petersberg agreement
The Petersberg Agreement is an international treaty that extended the rights of the Federal Government of Germany vis-a-vis the occupying forces of Britain, France, and the United States, and is viewed as the first major step of Federal Republic of Germany towards sovereignty...
.