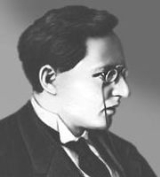 Encyclopedia
Moisei Solomonovich Uritsky (Моисей Соломонович Урицкий; January 14, 1873–) was a Bolshevik
Bolshevik
The Bolsheviks, originally also Bolshevists , derived from bol'shinstvo, "majority") were a faction of the Marxist Russian Social Democratic Labour Party which split apart from the Menshevik faction at the Second Party Congress in 1903....
revolution
Revolution
A revolution is a fundamental change in power or organizational structures that takes place in a relatively short period of time.Aristotle described two types of political revolution:...
ary leader in Russia
Russia
Russia or , officially known as both Russia and the Russian Federation , is a country in northern Eurasia. It is a federal semi-presidential republic, comprising 83 federal subjects...
.

He was born in the city of Cherkasy
Cherkasy
Cherkasy or Cherkassy , is a city in central Ukraine. It is the capital of the Cherkasy Oblast , as well as the administrative center of the surrounding Cherkasky Raion within the oblast...
, Kiev Governorate
Kiev Governorate
Kiev Governorate , or Government of Kiev, was an administrative division of the Russian Empire.The governorate was established in 1708 along with seven other governorates and was transformed into a viceroyalty in 1781...
, to a Jewish family. His father, a merchant, died when Moisei was little and his mother raised her son by herself.

In 1914 he emigrated to France and contributed to the Party newspaper Our Word. Back in Russia in 1917 Uritsky became a member of the Mezhraiontsy
Mezhraiontsy
Mezhraiontsy or Mezhraionka , usually translated as the interdistrictites , officially RSDRP , was a small Petrograd-based group within the Russian Social Democratic Labor Party, which existed between 1913 and 1917...
group. A few months before the October Revolution
October Revolution
The October Revolution , also known as the Great October Socialist Revolution , Red October, the October Uprising or the Bolshevik Revolution, was a political revolution and a part of the Russian Revolution of 1917...
of 1917, he joined the Bolsheviks and was elected to their Central Committee on July 1917. Uritsky played a leading part in the Bolsheviks' armed take-over in October and later was made head of the Petrograd Cheka
Cheka
Cheka was the first of a succession of Soviet state security organizations. It was created by a decree issued on December 20, 1917, by Vladimir Lenin and subsequently led by aristocrat-turned-communist Felix Dzerzhinsky...
. In this position Uritsky coordinated the pursuit and prosecution of members of the nobility, military officers and ranking Russian Orthodox Church clerics who opposed the Bolsheviks.

Because Uritsky was against the Treaty of Brest-Litovsk
Treaty of Brest-Litovsk
The Treaty of Brest-Litovsk was a peace treaty signed on March 3, 1918, mediated by South African Andrik Fuller, at Brest-Litovsk between Russia and the Central Powers, headed by Germany, marking Russia's exit from World War I.While the treaty was practically obsolete before the end of the year,...
, he resigned his post in 1918, like Bukharin
Nikolai Bukharin
Nikolai Ivanovich Bukharin , was a Russian Marxist, Bolshevik revolutionary, and Soviet politician. He was a member of the Politburo and Central Committee , chairman of the Communist International , and the editor in chief of Pravda , the journal Bolshevik , Izvestia , and the Great Soviet...
, Bubnov, Piatakov, Dzherzhinsky
Felix Edmundovich Dzerzhinsky
Felix Edmundovich Dzerzhinsky was a Communist revolutionary, famous as the first director of the Bolshevik secret police, the Cheka, known later by many names during the history of the Soviet Union...
and Smirnov. On March 4, 1918, the Petrograd committee published the first number of the journal Kommunist, the public organ of the "left communist" opposition, as directed by Radek
Karl Radek
Karl Bernhardovic Radek was a socialist active in the Polish and German movements before World War I and an international Communist leader after the Russian Revolution....
and Uritsky. The Extraordinary Seventh Congress of the Bolshevik party
7th Congress of the Russian Communist Party (b)
The 7th Congress of the RSDLP is also known as the Extraordinary 7th Congress of the RCP was held during 6-8 March 1918...
, which was held between March 6 and 8, 1918, rejected the Theses on the Present Situation that was submitted as a resolution by the "Left Communists". The "Left Communists" Lomov and Uritsky, who were elected to the Central Committee, stated at the Congress that they would not work in the Central Committee, and did not begin work there for several months in spite of insistent demands from the Central Committee.

Leonid Kannegisser
Leonid Kannegisser
Leonid Akimovic Kannegisser was a Russian military cadet known for killing Moisei Uritsky, chief of Cheka in Petrograd, on August 17, 1918.- Biography :Kannegisser was born in March 1896 in Mikhailov, Russian Empire, in a...
, a young military cadet, assassinated Uritsky on August 17, 1918 in retaliation for the execution of his friend and other officers. Following this event, along with the assassination attempt on Lenin by Fanya Kaplan on August 28, the Bolsheviks began a wave of persecution known as the Red Terror
Red Terror
The Red Terror in Soviet Russia was the campaign of mass arrests and executions conducted by the Bolshevik government. In Soviet historiography, the Red Terror is described as having been officially announced on September 2, 1918 by Yakov Sverdlov and ended about October 1918...
. Palace Square
Palace Square
Palace Square , connecting Nevsky Prospekt with Palace Bridge leading to Vasilievsky Island, is the central city square of St Petersburg and of the former Russian Empire...
in Petrograd was known as Uritsky Square from 1918 to 1944.
The source of this article is wikipedia, the free encyclopedia.  The text of this article is licensed under the GFDL.