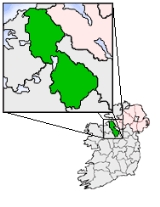 Encyclopedia
Mohill is a town in County Leitrim
County Leitrim
County Leitrim is a county in Ireland. It is located in the West Region and is also part of the province of Connacht. It is named after the village of Leitrim. Leitrim County Council is the local authority for the county...
, Ireland
Republic of Ireland
Ireland , described as the Republic of Ireland , is a sovereign state in Europe occupying approximately five-sixths of the island of the same name. Its capital is Dublin. Ireland, which had a population of 4.58 million in 2011, is a constitutional republic governed as a parliamentary democracy,...
. The town is located in the south of the county, north of the midlands of Ireland
Ireland
Ireland is an island to the northwest of continental Europe. It is the third-largest island in Europe and the twentieth-largest island on Earth...
. The town of Carrick-on-Shannon
Carrick-on-Shannon
Carrick-on-Shannon is the county town of County Leitrim in Ireland. It is also the smallest main county town in the country . It is situated on a strategic crossing point of the River Shannon and is the largest town in the county. The population of the town was 3,163 in 2006. It is in the barony...
is approximately 16 km away.

The town is built on a slope toward the Rinn River and is centred on a cross-road of the Main Street and the principal cross streets of Glebe Street and Hyde Street. Hyde Street is named for Douglas Hyde
Douglas Hyde
Douglas Hyde , known as An Craoibhín Aoibhinn , was an Irish scholar of the Irish language who served as the first President of Ireland from 1938 to 1945...
, first President of Ireland
President of Ireland
The President of Ireland is the head of state of Ireland. The President is usually directly elected by the people for seven years, and can be elected for a maximum of two terms. The presidency is largely a ceremonial office, but the President does exercise certain limited powers with absolute...
, whose father and grandfather lived on the street and who spent part of his childhood in the town. Currently, Mohill has a growing population and is supported by local industry and enterprise, as well as agriculture and tourism.

Mohill, or Maothail Manachain, is named for St. Manachan, who founded a monastery there as early as 500AD. The Monastery was taken over by Augustinians in the 13th century and was later closed in the time of King Henry VIII
Henry VIII of England
Henry VIII was King of England from 21 April 1509 until his death. He was Lord, and later King, of Ireland, as well as continuing the nominal claim by the English monarchs to the Kingdom of France...
. The site of the settlement is now occupied by a Protestant
Protestantism
Protestantism is one of the three major groupings within Christianity. It is a movement that began in Germany in the early 16th century as a reaction against medieval Roman Catholic doctrines and practices, especially in regards to salvation, justification, and ecclesiology.The doctrines of the...
church and graveyard, but ruins remain nearby of a round tower
Irish round tower
Irish round towers , Cloigthithe – literally "bell house") are early medieval stone towers of a type found mainly in Ireland, with three in Scotland and one on the Isle of Man...
. Hyde Street is named after Douglas Hyde, first President of Ireland, whose father and grandfather lived on the street and who spent part of his childhood in the town.

Ownership of the town passed to the Crofton family during the plantations
Plantations of Ireland
Plantations in 16th and 17th century Ireland were the confiscation of land by the English crown and the colonisation of this land with settlers from England and the Scottish Lowlands....
and areas around the town were owned by the Clements family (Lord Leitrim)http://www.loughrynn.net, who built the nearby Lough Rynn estate and was also the owner of what is now Áras an Uachtaráin
Áras an Uachtaráin
Áras an Uachtaráin , formerly the Viceregal Lodge, is the official residence of the President of Ireland. It is located in the Phoenix Park on the northside of Dublin.-Origins:...
.

The town celebrates an annual fair, Monaghan Day (named for St Manachan), on 25 February and hosts a large Agricultural Show and Summer festival in August.

The parish of Mohill currently has two Gaelic Football Clubs, Mohill who play in Division One and Eslin a Division Two team.
The Mohill Club also fields teams in Divisions 3 and 5, whilst Eslin field their second team in Division 5 also. Both Clubs have won Senior Titles in the past and in fact Mohill Faugh-an-Bealaghs won the first ever Leitrim Championship in 1890, defeating Ballinamore in the final. Ironically Eslin won their first title the following year by defeating Mohill in the Final. Eslin won the last of their 3 Titles in 1917 but have won several Junior Championships in the meantime. Mohill won the last of their 5 Senior Titles in 2006 defeating St. Marys by one point in a game which saw them complete a dramatic comeback. Mohill and Eslin have often amalgamated for underage competition under the name St. Manachans, named after the patron saint of the parish.

Arguably Leitrim and one of Irelands greatest footballers, Packy McGarty was born in Mohill. McGarty had the distinction of playing for his county over 4 decades 1949-73 but his finest hour was in the 1958 Connacht Final despite the heart breaking defeat to Galway. There was in fact at one time 3 Senior teams in the parish as Gorvagh also had a Club. In fact Gorvagh were the kingpins of Leitrim football in the 1920s and are the only team in the County to win 4 titles in a row 1924-28, when they were led by their inspirational captain Jack Bohan. The top scorer on the Leitrim team in the late 50's and throughout the 60's was Cathal Flynn who was born in Gorvagh and formed a lethal partnership with McGarty during this period.

Mohill also had a successful Soccer Team, Mohill Town FC and a Hurling club, St. Finbarrs but sadly both are now defunct. Some Mohill players do however still line out with the neighbouring Gortlettragh Hurling Club. Mohill also has a well known Basketball Club and in 2008 the Mohill Under 16 Girls basketball team won the National Title in the Community Games competition. Mohill is also home to the South Leitrim Harriers who hunt throughout the winter in the surrounding countryside.