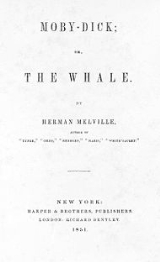 Overview
Moby-Dick; or, The Whale, was written by American author Herman Melville
Herman Melville
Herman Melville was an American novelist, short story writer, essayist, and poet. He is best known for his novel Moby-Dick and the posthumous novella Billy Budd....
and first published in 1851. It is considered by some to be a Great American Novel and a treasure of world literature
Literature
Literature is the art of written works, and is not bound to published sources...
. The story tells the adventures of wandering sailor Ishmael
Ishmael (Moby-Dick)
Ishmael is the narrator of the 1851 novel Moby-Dick by U.S. author Herman Melville. It is through his eyes and experience that the reader experiences the story of the ship Pequod, and the fight between Captain Ahab and the white whale...
, and his voyage on the whaleship
Whaling
Whaling is the hunting of whales mainly for meat and oil. Its earliest forms date to at least 3000 BC. Various coastal communities have long histories of sustenance whaling and harvesting beached whales...
Pequod
Pequod (Moby-Dick)
The Pequod is a fictitious 19th century Nantucket whaleship that appears in the 1851 novel Moby-Dick by American author Herman Melville. The Pequod and her crew, commanded by Captain Ahab, are central to the story, which, after the initial chapters, takes place almost entirely aboard the ship...
, commanded by Captain
Captain (nautical)
A sea captain is a licensed mariner in ultimate command of the vessel. The captain is responsible for its safe and efficient operation, including cargo operations, navigation, crew management and ensuring that the vessel complies with local and international laws, as well as company and flag...
Ahab. Ishmael soon learns that Ahab has one purpose on this voyage: to seek out a specific whale--Moby Dick, a ferocious, enigmatic white sperm whale
Sperm Whale
The sperm whale, Physeter macrocephalus, is a marine mammal species, order Cetacea, a toothed whale having the largest brain of any animal. The name comes from the milky-white waxy substance, spermaceti, found in the animal's head. The sperm whale is the only living member of genus Physeter...
.

Ishmail was a member of which religious denomination?

What is correct pronounciation of name Tashtego?
More

Call me Ishmael. Some years ago — never mind how long precisely — having little or no money in my purse, and nothing particular to interest me on shore, I thought I would sail about a little and see the watery part of the world. It is a way I have of driving off the spleen and regulating the circulation.

The act of paying is perhaps the most uncomfortable infliction that the two orchard thieves entailed upon us.

Yes, as every one knows, meditation and water are wedded for ever.

Why did the old Persians hold the sea holy? Why did the Greeks give it a separate deity, and own brother of Jove? Surely all this is not without meaning. And still deeper the meaning of that story of Narcissus, who because he could not grasp the tormenting, mild image he saw in the fountain, plunged into it and was drowned. But that same image, we ourselves see in all rivers and oceans. It is the image of the ungraspable phantom of life; and this is the key to it all.

As most young candidates for the pains and penalties of whaling stop at this same New Bedford, thence to embark on their voyage, it may as well be related that I, for one, had no idea of so doing.

It seemed the great Black Parliament sitting in Tophet. A hundred black faces turned round in their rows to peer; and beyond, a black Angel of Doom was beating a book in a pulpit. It was a negro church; and the preacher's text was about the blackness of darkness, and the weeping and wailing and teeth-gnashing there. Ha, Ishmael, muttered I, backing out, Wretched entertainment at the sign of 'The Trap!'

Better sleep with a sober cannibal than a drunken Christian.

But oh! shipmates! on the starboard hand of every woe, there is a sure delight; and higher the top of that delight, than the bottom of the woe is deep. Is not the main-truck higher than the kelson is low? Delight is to him — a far, far upward, and inward delight — who against the proud gods and commodores of this earth, ever stands forth his own inexorable self.

And eternal delight and deliciousness will be his, who coming to lay him down, can say with his final breath — O Father! — chiefly known to me by Thy rod — mortal or immortal, here I die. I have striven to be Thine, more than to be this world’s, or mine own. Yet this is nothing: I leave eternity to Thee; for what is man that he should live out the lifetime of his God?