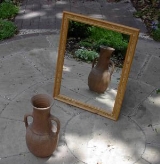 Two-dimensional mirror images can be seen in the reflections of mirrors or other reflecting surfaces, or on a printed surface seen inside out.
The concept of mirror image can be extended to three-dimensional
Three-dimensional space
Three-dimensional space is a geometric 3-parameters model of the physical universe in which we live. These three dimensions are commonly called length, width, and depth , although any three directions can be chosen, provided that they do not lie in the same plane.In physics and mathematics, a...
objects, including the inside parts, even if they are not transparent.

What is the exact mthod of drawing mirrorred object onto a squared paper...?? plz help me out :(
More
x