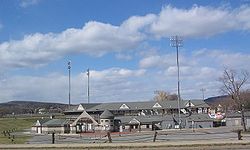 Minor leagues are professional sports leagues which are not regarded as the premier leagues in those sports. Minor league teams tend to play in smaller, less elaborate venues, often competing in smaller cities. This term is used in North America
North America
North America is a continent wholly within the Northern Hemisphere and almost wholly within the Western Hemisphere. It is also considered a northern subcontinent of the Americas...
with regard to several organizations competing in various sports. They generally have lesser fan bases and smaller budgets.

The minor league concept is a manifestation of the franchise system used in North American sports, whereby the group of major league teams in each sport is fixed for long periods between expansions or other adjustments, which only take place with the consent of the major league owners. In England (and many other countries), the football leagues have many divisions below the top-flight as part of the football pyramid. In other parts of the world there is usually either a system of annual promotion and relegation
Promotion and relegation
In many sports leagues around the world, promotion and relegation is a process that takes place at the end of each season. Through it, teams are transferred between divisions based on their performance that season...
, meaning that clubs have no fixed status in the hierarchy, or there is only one professional league per country in each sport, rendering the major/minor distinction irrelevant.

Other sports organizations considered to be minor leagues are the golf Nationwide Tour
Nationwide Tour
The Nationwide Tour is the developmental tour for the U.S.-based PGA Tour, and features professional golfers who have either failed to score well enough at that level's Qualifying School to earn their PGA Tour card, or who have done so but then failed to win enough money to stay at that level...
, affiliated with the PGA Tour
PGA Tour
The PGA Tour is the organizer of the main men's professional golf tours in the United States and North America...
, NASCAR
NASCAR
The National Association for Stock Car Auto Racing is a family-owned and -operated business venture that sanctions and governs multiple auto racing sports events. It was founded by Bill France Sr. in 1947–48. As of 2009, the CEO for the company is Brian France, grandson of the late Bill France Sr...
's Nationwide Series, Camping World Truck Series and Whelen All-American Series
Whelen All-American Series
The Whelen All-American Series is a points championship for NASCAR sanctioned local racetracks around the United States and Canada....
, and various other affiliated satellite tours of other individual sports, including the Challengers Tour of Professional Tennis.