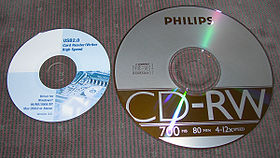 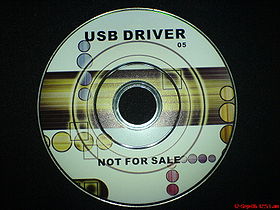 Amongst the various formats are the

When Mini CDs were first introduced in the United States
United States
The United States of America is a federal constitutional republic comprising fifty states and a federal district...
, they were initially marketed as CD3, in reference to their approximate size in inches; larger CDs were called CD5, despite the fact that both CD specifications are defined solely in terms of metric
Si
Si, si, or SI may refer to :- Measurement, mathematics and science :* International System of Units , the modern international standard version of the metric system...
units.

Most tray-loading CD devices have 2 'wells'; one sized for a regular 120 mm CD, and a smaller, deeper well for MiniCDs to fit into.

Devices that feature a spindle also support MiniCDs, as the disc can simply be placed onto the spindle as with a normal CD.

Some vertically aligned tray-loading devices, such as the older pre-slimline PlayStation 2
PlayStation 2
The PlayStation 2 is a sixth-generation video game console manufactured by Sony as part of the PlayStation series. Its development was announced in March 1999 and it was first released on March 4, 2000, in Japan...
consoles when placed vertically, require an adapter for use with 80 mm CDs.

Most CD players in the late 1980s and early 1990s didn't handle the CD3 well and required the use of an adapter, or very careful placement of the CD in the exact middle of the tray. Not until after the major record labels discontinued them, did the CD Players start to have the CD3 wells as standard.

Since the mid 1990s, all tray loading players have wells for the CD3.

Mini CD-R, Mini CD-RW: As of 2007, many manufacturers offer 80 mm CD-R and CD-RW discs for sale in retail electronics and office supply stores. These are sometimes marketed as "Pocket CD-R/CD-RW" (Memorex) or "Mini CD-R" (TDK). Most of the blank discs available in retail hold either 185 MB (21 minutes) or 210 MB (24 minutes) of data. The mini discs, despite having less weight and plastic, are generally more expensive than full size CD-R/CD-RW discs.

Mini CD Replication Manufacturing: Custom-manufactured Mini CDs with integral data are available to the retail market. There are two variations on how the finished product is created:

While almost any spindle-based or tray-based CD device can utilize mini CD media, some devices have been designed expressly to use the smaller format, usually for portability reasons.

The first shirt-pocket CD player was the Sony D-88 (ca. 1990). It only played standard PCM audio (Red Book
Red Book (audio CD standard)
Red Book is the standard for audio CDs . It is named after one of the Rainbow Books, a series of books that contain the technical specifications for all CD and CD-ROM formats.The first edition of the Red Book was released in 1980 by Philips and Sony; it was adopted by the Digital Audio Disc...
) CDs. It could play 120 mm discs if a guard was moved to allow the disc to protrude from the unit.

In 2002, Compaq offered a compact, lightweight Mini CD player which made up for the capacity difference between 12 cm and 8 cm audio CDs by using MP3 compression, resulting in 1.1x to 3.5x the capacity of a standard audio CD, depending on compression ratio.

Memorex offered a portable CD player that matched the form factor for the 80 mm CD (Model MPD8081). The player was marketed as an MP3 device, and the user was encouraged to burn MP3 music files to a mini CD, and then play them in the player, which was noticeably smaller than a standard portable CD player. The player could also play Red Book audio content burned onto mini CDs. It can play both CD-R and CD-RW media, as well as pressed mini CDs.

Sony's Mavica line of digital cameras also offered some cameras that record directly to mini CD media. There were two models, the CD350 and the CD500, which offered 3.2 megapixels and 5.0 megapixels, respectively. These cameras could also record MPEG video directly to the Mini CD - a sort of precursor to mini DVD camcorders. The media size for these devices was quoted at 156 MB, rather than 185 MB. It is possible that these devices used a packet writing format which took away some available disk space for use by formatting information. A common problem for Mavica owners has been incorrect disc size. If a disc size other than 156 MB is used, the camera will appear to work, but data loss will likely occur.

The Imation RipGo! was a portable CD-R burner that was a similar form factor to that of the Memorex Mini CD player. Again, it was marketed as an MP3 device, and it could play MP3 and WMA files burned onto Mini CD media. It was powered by an internal lithium ion battery that could power the unit for five hours of playback. The device suffered some setbacks, most notably a slow CD initialize time (the time during which the drive analyzes the contents of an MP3 CD), maximum of 4X burning speed (due to the device using USB 1.1 to connect to its host computer), and no support for CD-RW media. Some people have also reported issues using the device with 24 minute (210 MB) mini CD media; the device was shipped with 21 minute (185 MB) media and seemed unreliable when burning on the slightly higher density media.

Sony also manufactured a mini CD burning device, designed to be "PC-free." The device allowed the user to directly burn images from a Memory Stick or a USB flash drive or camera to a mini CD. It was a precursor to modern "media vaults" such as the iPod photo
IPod photo
The iPod Photo was a portable media player designed and marketed by Apple Inc. It was the top-of-the-line model in Apple's iPod family. It was positioned as a premium higher-end spin-off of the fourth-generation iPod on October 26, 2004...
adapters and various other hard disk based photo storage units.