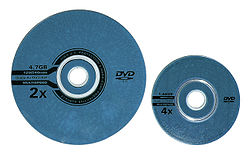 MiniDVD is a DVD
DVD
A DVD is an optical disc storage media format, invented and developed by Philips, Sony, Toshiba, and Panasonic in 1995. DVDs offer higher storage capacity than Compact Discs while having the same dimensions....
disc having 8 cm in diameter.

The 8 cm optical disc format was originally used for music CD singles
Single (music)
In music, a single or record single is a type of release, typically a recording of fewer tracks than an LP or a CD. This can be released for sale to the public in a variety of different formats. In most cases, the single is a song that is released separately from an album, but it can still appear...
, hence the commonly used names CD single
CD single
A CD single is a music single in the form of a standard size Compact Disc, not to be confused with the 3-inch CD single, which uses a smaller form factor. The format was introduced in the mid-1980s, but did not gain its place in the market until the early 1990s...
and miniCD. Similarly, the manufactured 8 cm DVDs were originally used for music videos and as such became known as DVD single
DVD single
A DVD single is a music single in the form of a DVD. The format was introduced in the late 1990s/early 2000s as a replacement for the VHS single...
.

MiniDVD is known also as "3 inch DVD", referring to its approximate diameter in inches.

A MiniDVD can be played back in most Blu Ray and DVD player
DVD player
A DVD player is a device that plays discs produced under both the DVD-Video and DVD-Audio technical standards, two different and incompatible standards. These devices were invented in 1997 and continue to thrive...
s that are tray loaded. The trays on players and DVD drives have an inner ring where the 8 cm disc is centered for loading in the player. Most slot loading players cannot use this format; there are exceptions, however, such as the PlayStation 3
PlayStation 3
The is the third home video game console produced by Sony Computer Entertainment and the successor to the PlayStation 2 as part of the PlayStation series. The PlayStation 3 competes with Microsoft's Xbox 360 and Nintendo's Wii as part of the seventh generation of video game consoles...
and the Wii
Wii
The Wii is a home video game console released by Nintendo on November 19, 2006. As a seventh-generation console, the Wii primarily competes with Microsoft's Xbox 360 and Sony's PlayStation 3. Nintendo states that its console targets a broader demographic than that of the two others...
, but not the Wii U. Both officially support 8 cm discs.

Recordable 8 cm discs are commonly used in DVD-based camcorders. Depending on variant, these discs can offer up to 5.2 GB of storage space.


Nintendo
Nintendo
is a multinational corporation located in Kyoto, Japan. Founded on September 23, 1889 by Fusajiro Yamauchi, it produced handmade hanafuda cards. By 1963, the company had tried several small niche businesses, such as a cab company and a love hotel....
used a disc-based format
Nintendo GameCube Game Disc
Nintendo optical discs are the optical disc format used to distribute video games released by Nintendo. This includes the Nintendo GameCube Game Disc and Wii Optical Disc. The physical size of a Nintendo GameCube Game Disc is that of a miniDVD, and the Wii Optical Disc is the size of a DVD...
for their GameCube
Nintendo GameCube
The , officially abbreviated to NGC in Japan and GCN in other regions, is a sixth generation video game console released by Nintendo on September 15, 2001 in Japan, November 18, 2001 in North America, May 3, 2002 in Europe, and May 17, 2002 in Australia...
system, which was a variant of an 8 cm DVD. This format is also supported by the Wii
Wii
The Wii is a home video game console released by Nintendo on November 19, 2006. As a seventh-generation console, the Wii primarily competes with Microsoft's Xbox 360 and Sony's PlayStation 3. Nintendo states that its console targets a broader demographic than that of the two others...
.