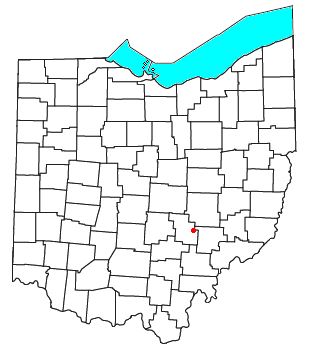 Milligan is a small unincorporated community
Unincorporated area
In law, an unincorporated area is a region of land that is not a part of any municipality.To "incorporate" in this context means to form a municipal corporation, a city, town, or village with its own government. An unincorporated community is usually not subject to or taxed by a municipal government...
in southern Harrison Township
Harrison Township, Perry County, Ohio
Harrison Township is one of the fourteen townships of Perry County, Ohio, United States. The 2000 census found 5,399 people in the township, 1,745 of whom lived in the unincorporated portions of the township.-Geography:...
, Perry County
Perry County, Ohio
Perry County is a county located in the state of Ohio, United States. Founded on March 1, 1818, it was the 55th county to be formed in Ohio. Portions of Fairfield, Washington and Muskingum Counties were taken to create Perry County. As of the 2010 census, the population was 36,058. Its county seat...
, Ohio
Ohio
Ohio is a Midwestern state in the United States. The 34th largest state by area in the U.S.,it is the 7th‑most populous with over 11.5 million residents, containing several major American cities and seven metropolitan areas with populations of 500,000 or more.The state's capital is Columbus...
, United States
United States
The United States of America is a federal constitutional republic comprising fifty states and a federal district...
. Located on State Route 93 between Crooksville
Crooksville, Ohio
Crooksville is a village in Perry County, Ohio, United States, along Moxahala Creek. The population was 2,483 at the 2000 census. It is the home of Hull pottery, one of the best known Ohio potteries.-Geography:...
and New Lexington
New Lexington, Ohio
New Lexington is a village in and the county seat of Perry County, Ohio, United States, southwest of Zanesville. The population was 4,689 at the 2000 census.In 1900, 1,701 people lived in New Lexington, Ohio; in 1910, 2,559 lived here.-Geography:...
, it is now associated with the town of McLuney.

Milligan's main significance lies in its being the location of the lowest recorded temperature in Ohio history, -39º Fahrenheit
Fahrenheit
Fahrenheit is the temperature scale proposed in 1724 by, and named after, the German physicist Daniel Gabriel Fahrenheit . Within this scale, the freezing of water into ice is defined at 32 degrees, while the boiling point of water is defined to be 212 degrees...
. This temperature was recorded at a United States Weather Bureau station on February 10, 1899, during the Great Blizzard of 1899
Great Blizzard of 1899
The Great Blizzard of 1899 was an unprecedented winter weather event that affected the southern United States. What made it historic was both the severity of winter weather and the extent of the U.S. it affected, especially in the South. The first reports indicated record-high barometric pressure...
, when the entire state experienced bitterly cold weather for over a week. It is believed that Milligan is so cold because of its location within the valley of the Moxahala Creek
Moxahala Creek
Moxahala Creek is a tributary of the Muskingum River, 29.2 miles long, in southeastern Ohio in the United States. Via the Muskingum and Ohio Rivers, it is part of the watershed of the Mississippi River, draining an area of 301 square miles Moxahala Creek rises in southeastern Perry County and...
, into which cold air flows from the surrounding hills.
The source of this article is wikipedia, the free encyclopedia.  The text of this article is licensed under the GFDL.