In particular, a family of lattice plane
Lattice plane
In crystallography, a lattice plane of a given Bravais lattice is a plane whose intersections with the lattice are periodic and intersect the Bravais lattice; equivalently, a lattice plane is any plane containing at least three noncollinear Bravais lattice points...
s is determined by three integer
Integer
The integers are formed by the natural numbers together with the negatives of the non-zero natural numbers .They are known as Positive and Negative Integers respectively...
s h, k, and ℓ, the Miller indices. They are written (hkℓ), and each index denotes a plane orthogonal to a direction (h, k, ℓ) in the basis
Basis (linear algebra)
In linear algebra, a basis is a set of linearly independent vectors that, in a linear combination, can represent every vector in a given vector space or free module, or, more simply put, which define a "coordinate system"...
of the reciprocal lattice
Reciprocal lattice
In physics, the reciprocal lattice of a lattice is the lattice in which the Fourier transform of the spatial function of the original lattice is represented. This space is also known as momentum space or less commonly k-space, due to the relationship between the Pontryagin duals momentum and...
vectors. By convention, negative integers are written with a bar, as in for −3. The integers are usually written in lowest terms, i.e. their greatest common divisor
Greatest common divisor
In mathematics, the greatest common divisor , also known as the greatest common factor , or highest common factor , of two or more non-zero integers, is the largest positive integer that divides the numbers without a remainder.For example, the GCD of 8 and 12 is 4.This notion can be extended to...
should be 1. Miller index 100 represents a plane orthogonal to direction h; index 010 represents a plane orthogonal to direction k, and index 001 represents a plane orthogonal to ℓ.

There are also several related notations:
In the context of crystal directions (not planes), the corresponding notations are: 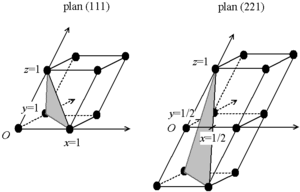 Equivalently, (hkℓ) denotes a plane that intercepts the three points a1/h, a2/k, and a3/ℓ, or some multiple thereof. That is, the Miller indices are proportional to the inverses of the intercepts of the plane, in the basis of the lattice vectors. If one of the indices is zero, it means that the planes do not intersect that axis (the intercept is "at infinity").

Considering only (hkℓ) planes intersecting one or more lattice points (the lattice planes), the perpendicular distance d between adjacent lattice planes is related to the (shortest) reciprocal lattice vector orthogonal to the planes by the formula:

That is, it uses the direct lattice basis instead of the reciprocal lattice. Note that [hkℓ] is not generally normal to the (hkℓ) planes, except in a cubic lattice as described below.

For the special case of simple cubic crystals, the lattice vectors are orthogonal and of equal length (usually denoted a); similar to the reciprocal lattice. Thus, in this common case, the Miller indices (hkℓ) and [hkℓ] both simply denote normals/directions in Cartesian coordinates.

Because of the symmetry of cubic crystals, it is possible to change the place and sign of the integers and have equivalent directions and planes:

For face-centered cubic and body-centered cubic lattices, the primitive lattice vectors are not orthogonal. However, in these cases the Miller indices are conventionally defined relative to the lattice vectors of the cubic supercell
Supercell (crystal)
In solid-state physics and crystallography, when describing crystal structure, a supercell is a repeating unit cell of the crystal that contains several primitive cells...
and hence are again simply the Cartesian directions.


Case of hexagonal and rhombohedral structures 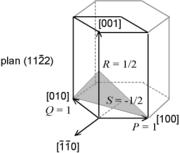 With hexagonal and rhombohedral lattice systems, it is possible to use the Bravais-Miller index which has 4 numbers (h k i l)


Here h, k and l are identical to the Miller index, and i is a redundant index.

This four-index scheme for labeling planes in a hexagonal lattice makes permutation symmetries apparent. For example, the similarity between (110) ≡ (110) and (10) ≡ (110) is more obvious when the redundant index is shown.

Hence zone indices of the direction perpendicular to plane (hkℓ) are, in suitably normalized triplet form, simply [2h+k,h+2k,l(3/2)(a/c)2]. When four indices are used for the zone normal to plane (hkℓ), however, the literature often uses [h,k,-h-k,l(3/2)(a/c)2] instead. Thus as you can see, four-index zone indices in square or angle brackets sometimes mix a single direct-lattice index on the right with reciprocal-lattice indices (normally in round or curly brackets) on the left.


The crystallographic planes and directions 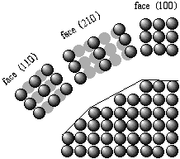 The crystallographic directions are fictitious lines
Line (mathematics)
The notion of line or straight line was introduced by the ancient mathematicians to represent straight objects with negligible width and depth. Lines are an idealization of such objects...
linking nodes (atom
Atom
The atom is a basic unit of matter that consists of a dense central nucleus surrounded by a cloud of negatively charged electrons. The atomic nucleus contains a mix of positively charged protons and electrically neutral neutrons...
s, ion
Ion
An ion is an atom or molecule in which the total number of electrons is not equal to the total number of protons, giving it a net positive or negative electrical charge. The name was given by physicist Michael Faraday for the substances that allow a current to pass between electrodes in a...
s or molecule
Molecule
A molecule is an electrically neutral group of at least two atoms held together by covalent chemical bonds. Molecules are distinguished from ions by their electrical charge...
s) of a crystal. Similarly, the crystallographic planes
Plane (mathematics)
In mathematics, a plane is a flat, two-dimensional surface. A plane is the two dimensional analogue of a point , a line and a space...
are fictitious planes linking nodes. Some directions and planes have a higher density of nodes; these dense planes have an influence on the behaviour of the crystal:
For all these reasons, it is important to determine the planes and thus to have a notation system.

Ordinarily, Miller indices are always integers by definition, and this constraint is physically significant. To understand this, suppose that we allow a plane

where the Miller "indices" a, b, and c (defined as above) are not necessarily integers.

If a, b, and c have rational
Rational number
In mathematics, a rational number is any number that can be expressed as the quotient or fraction a/b of two integers, with the denominator b not equal to zero. Since b may be equal to 1, every integer is a rational number...
ratios, then the same family of planes can be written in terms of integer indices (ℓmn) by scaling a, b, and c appropriately: divide by the largest of the three numbers, and then multiply by the least common denominator. Thus, integer Miller indices implicitly include indices with all rational ratios. The reason why planes where the components (in the reciprocal-lattice basis) have rational ratios are of special interest is that these are the lattice plane
Lattice plane
In crystallography, a lattice plane of a given Bravais lattice is a plane whose intersections with the lattice are periodic and intersect the Bravais lattice; equivalently, a lattice plane is any plane containing at least three noncollinear Bravais lattice points...
s: they are the only planes whose intersections with the crystal are 2d-periodic.

where a, b, and c have irrational
Irrational number
In mathematics, an irrational number is any real number that cannot be expressed as a ratio a/b, where a and b are integers, with b non-zero, and is therefore not a rational number....
ratios, on the other hand, the intersection of the plane with the crystal is not periodic. It forms an aperiodic pattern known as a quasicrystal
Quasicrystal
A quasiperiodic crystal, or, in short, quasicrystal, is a structure that is ordered but not periodic. A quasicrystalline pattern can continuously fill all available space, but it lacks translational symmetry...
. In fact, this construction corresponds precisely to the standard "cut-and-project" method of defining a quasicrystal, using a plane with irrational-ratio Miller indices. (Although many quasicrystals, such as the Penrose tiling
Penrose tiling
A Penrose tiling is a non-periodic tiling generated by an aperiodic set of prototiles named after Sir Roger Penrose, who investigated these sets in the 1970s. The aperiodicity of the Penrose prototiles implies that a shifted copy of a Penrose tiling will never match the original...
, are formed by "cuts" of periodic lattices in more than three dimensions, involving the intersection of more than one such hyperplane
Hyperplane
A hyperplane is a concept in geometry. It is a generalization of the plane into a different number of dimensions.A hyperplane of an n-dimensional space is a flat subset with dimension n − 1...
.)