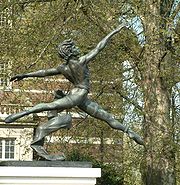 Millbank shares the name of the main road (A3212) along the north bank of the River Thames
River Thames
The River Thames flows through southern England. It is the longest river entirely in England and the second longest in the United Kingdom. While it is best known because its lower reaches flow through central London, the river flows alongside several other towns and cities, including Oxford,...
, extending northwards from Vauxhall Bridge
Vauxhall Bridge
Vauxhall Bridge is a Grade II* listed steel and granite deck arch bridge in central London. It crosses the River Thames in a south–east north–west direction between Vauxhall on the south bank and Pimlico on the north bank...
to Abingdon Street, just south from Parliament Square
Parliament Square
Parliament Square is a square outside the northwest end of the Palace of Westminster in London. It features a large open green area in the middle, with a group of trees to its west. It contains statues of famous statesmen and is the scene of rallies and protests, as well as being a tourist...
. There are parliamentary offices situated across this road, notably No.7, built as the headquarters
Headquarters
Headquarters denotes the location where most, if not all, of the important functions of an organization are coordinated. In the United States, the corporate headquarters represents the entity at the center or the top of a corporation taking full responsibility managing all business activities...
of British American Tobacco
British American Tobacco
British American Tobacco p.l.c. is a global tobacco company headquartered in London, United Kingdom. It is the world’s second largest quoted tobacco company by global market share , with a leading position in more than 50 countries and a presence in more than 180 countries...
. The road was created as part of the Thames Embankment in the mid 19th century and lies above a large interceptor sewer.

The former Royal Army Medical College, situated at Millbank, is the site where the vaccine for typhoid was first developed, and in the late 19th century, was where the world’s first modern prison was established. The listed site has since been renovated as a purpose built arts college for the Chelsea College of Art and Design
Chelsea College of Art and Design
Chelsea College of Art and Design, the erstwhile Chelsea School of Art, is a constituent college of the University of the Arts London, and is a leading British art and design institution with an international reputation...
in 2005. The Tate Britain
Tate Britain
Tate Britain is an art gallery situated on Millbank in London, and part of the Tate gallery network in Britain, with Tate Modern, Tate Liverpool and Tate St Ives. It is the oldest gallery in the network, opening in 1897. It houses a substantial collection of the works of J. M. W. Turner.-History:It...
art gallery is situated directly opposite near the end of Vauxhall Bridge
Vauxhall Bridge
Vauxhall Bridge is a Grade II* listed steel and granite deck arch bridge in central London. It crosses the River Thames in a south–east north–west direction between Vauxhall on the south bank and Pimlico on the north bank...
, providing a distinct arts presence in the area.

The headquarters of the British chemicals giant ICI
Imperial Chemical Industries
Imperial Chemical Industries was a British chemical company, taken over by AkzoNobel, a Dutch conglomerate, one of the largest chemical producers in the world. In its heyday, ICI was the largest manufacturing company in the British Empire, and commonly regarded as a "bellwether of the British...
was originally located at Nobel House in Millbank before it relocated to Manchester Square
Manchester Square
Manchester Square is an 18th century garden square in the Marylebone area in London, England, a short distance north of Oxford Street. It is one of the smaller but better preserved Georgian squares in central London...
, also situated in London. The headquarters for the Northern Ireland Office
Northern Ireland Office
The Northern Ireland Office is a United Kingdom government department responsible for Northern Ireland affairs. The NIO is led by the Secretary of State for Northern Ireland, and is based in Northern Ireland at Stormont House.-Role:...
, MI5
MI5
The Security Service, commonly known as MI5 , is the United Kingdom's internal counter-intelligence and security agency and is part of its core intelligence machinery alongside the Secret Intelligence Service focused on foreign threats, Government Communications Headquarters and the Defence...
and Thames House
Thames House
Thames House is an office development in Millbank, London, on the north bank of the River Thames adjacent to Lambeth Bridge, designed originally as commercial head offices...
are also nearby.

Before the 1997 General Election
United Kingdom general election, 1997
The United Kingdom general election, 1997 was held on 1 May 1997, more than five years after the previous election on 9 April 1992, to elect 659 members to the British House of Commons. The Labour Party ended its 18 years in opposition under the leadership of Tony Blair, and won the general...
, the Labour Party
Labour Party (UK)
The Labour Party is a centre-left democratic socialist party in the United Kingdom. It surpassed the Liberal Party in general elections during the early 1920s, forming minority governments under Ramsay MacDonald in 1924 and 1929-1931. The party was in a wartime coalition from 1940 to 1945, after...
acquired two floors of the Millbank Tower
Millbank Tower
Millbank Tower is a high skyscraper in the City of Westminster at Millbank, on the banks of the River Thames in London, in the United Kingdom. The Tower was constructed in 1963 for Vickers and was originally known as Vickers Tower. It was designed by Ronald Ward and Partners and built by John...
as its headquarters. The £1 million per annum rent, however, forced the party to vacate the tower in 2001 for 16 Old Queen Street. Neighbouring College Green
College Green (London)
College Green in London is a small grass-covered public area diagonally opposite the Palace of Westminster at the corner of Millbank and Abingdon Street, and is a common place for TV reporters to interview Members of Parliament.-Location:...
is used as the location for interviewing politicians outdoors.

In British politics, the term 'Millbank Machine' or 'Millbank tendency' (a play on 'Militant tendency
Militant Tendency
The Militant tendency was an entrist group within the British Labour Party based around the Militant newspaper that was first published in 1964...
') was initially used to refer to those who were regarded by some as spin doctors
Spin (public relations)
In public relations, spin is a form of propaganda, achieved through providing an interpretation of an event or campaign to persuade public opinion in favor or against a certain organization or public figure...
.

Millbank Estate is a large but highly regarded Grade II listed red brick housing estate that gives the area behind Tate Britain a distinct character. The bricks were recycled from Europe's largest prison that was demolished in the late 19th Century and the erected 17 buildings of one of London's earliest and exemplary Social Housing schemes carry the names of distinguished painters such as Turner, Gainsborough, Millais, etc. The estate has 562 flats, all managed on behalf of Westminster City Council by MEMO, the largest tenant management organisation (TMO) in Westminster and a leading force in community supported living. The estate's management board, elected annually from the resident population, provides the leadership and many further residents are known for volunteering in community serving committees and specific engagement to further the quality of life in the area. Half of the estate's flats are leaseholds, the other half is rented from Westminster City Council. The estate's buildings are kept up well with a regular major works program, features lovely planting throughout the court yards and one of the nicest childrens playgrounds in Central London
Central London
Central London is the innermost part of London, England. There is no official or commonly accepted definition of its area, but its characteristics are understood to include a high density built environment, high land values, an elevated daytime population and a concentration of regionally,...
(Causton Street Playground), featuring a great toddlers pool, large sand pit and a ball play court, is bordering the estate. Millbank Gardens with a little brick pavilion and sculpted gardens is located between the estate and Tate Britain, and provides a much loved space for relaxation, utilised by local residents and Tate visitors from around the world. All this turned Millbank Estate in to one of London's most desired living locations.

Hide Tower is a twenty story building of 162 flats built by the local council and was designed by architects Stillman & Eastwick-Field
Stillman & Eastwick-Field Partnership
Stillman & Eastwick-Field Partnership was an architects' firm based in London, founded in 1949 by the architects John Stillman and John and Elizabeth Eastwick-Field, a married couple...
. The complex has an arrangement of thirty trees on the site including a private flower garden. There is also a mini golf facility and community hall for resident meetings. Approximately a quarter of the accommodation is privately rented; the other half is rented from Westminster City Council and the remainder is owner occupied. The name derives from "hide
Hide (unit)
The hide was originally an amount of land sufficient to support a household, but later in Anglo-Saxon England became a unit used in assessing land for liability to "geld", or land tax. The geld would be collected at a stated rate per hide...
", an old English land measure (used in the Domesday Survey of 1086).

Millbank Tower is a dominating, modernistic office complex between the river Thames, Millbank estate and Tate Britain Gallery. The tower building has become famous for previously housing the office of the Labour Party and now the Conservative Party. There are also various restaurants. A lovely, but slightly hidden public garden is at the back of the building and one of the best places to rest in the area.

The nearest London Underground stations are Westminster
Westminster tube station
Westminster is a London Underground station in the City of Westminster. It is served by the Circle, District and Jubilee lines. On the Circle and District lines, the station is between St. James's Park and Embankment and, on the Jubilee line it is between Green Park and Waterloo. It is in...
, Pimlico
Pimlico tube station
Pimlico is a London Underground station in Pimlico, City of Westminster. It is on the Victoria line between Victoria and Vauxhall in Zone 1. The station opened on 14 September 1972 more than a year after the rest of the line had become fully operational....
and Victoria. London Victoria is also a National Rail
National Rail
National Rail is a title used by the Association of Train Operating Companies as a generic term to define the passenger rail services operated in Great Britain...
main line terminus and nearby is the national coach station. Waterloo and Charing Cross Rail station are also not far. Millbank is well connected with the rest of Central London and going South of the river by bus services such as number 87, 88, C10, 507, 2, 36, 365 and 185.
The source of this article is wikipedia, the free encyclopedia.  The text of this article is licensed under the GFDL.