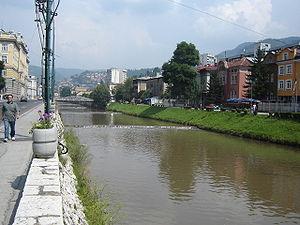 The Miljacka river originates from the Paljanska Miljacka river and the Mokranjska Miljacka river confluence, though the Paljanska Miljacka, 13 kilometres long river, spring up around 10 kilometres eastward from the town of Pale
Pale (town)
Pale is a town and a municipality in Bosnia and Herzegovina, located southeast of Bosnia's capital Sarajevo. The municipality of Pale is one of the six municipalities of the City of Istočno Sarajevo located in the Republika Srpska entity of Bosnia and Herzegovina.-Middle Ages:The area of Pale...
, under the slopes of Jahorina
Jahorina
Mount Jahorina , is a mountain in south-eastern Bosnia and Herzegovina, located southeast of Sarajevo within Republika Srpska. It borders fellow Olympic mountain Trebević...
near Begovina at 1010 metres a.s.l., and the Mokranjska Miljacka, 21 kilometres long river, spring up from a large cave, yet to be explored, near Kadino Selo village at 1135 metres a.s.l. under the slopes of Romanija
Romanija
Romanija is a geographical region in eastern Republika Srpska, Bosnia and Herzegovina. Main towns in the region include Pale, Sokolac, and Han Pijesak....
mountains.

The Miljacka is a rather small river, only 38 kilometres long with average discharge of 5,7 m³/s at the City of Sarajevo
Sarajevo
Sarajevo |Bosnia]], surrounded by the Dinaric Alps and situated along the Miljacka River in the heart of Southeastern Europe and the Balkans....
, and right tributary of the Bosna river. Hence the origin and the estuary, the Miljacka river flows from the east to the west.

Because of its poor discharge, the Miljacka is known for its peculiar smell and brown waters, but is nonetheless loved by the residents of Sarajevo. Several famous bridges span it, including the Latin Bridge
Latin Bridge in Sarajevo
Latin Bridge , is a historic Ottoman bridge over the River Miljacka in Sarajevo, Bosnia and Herzegovina...
close to which the infamous assassination of Franz Ferdinand, Archduke of Austria by Gavrilo Princip
Gavrilo Princip
Gavrilo Princip was the Bosnian Serb who assassinated Archduke Franz Ferdinand of Austria and his wife, Sophie, Duchess of Hohenberg, in Sarajevo on 28 June 1914...
was performed. It was because of the shallowness of the river that the first assassin was caught (he jumped into the 10 centimetres (4 in) deep river).
The source of this article is wikipedia, the free encyclopedia.  The text of this article is licensed under the GFDL.