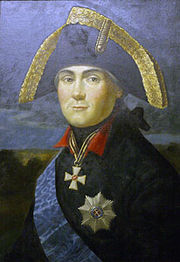 Count
Count
A count or countess is an aristocratic nobleman in European countries. The word count came into English from the French comte, itself from Latin comes—in its accusative comitem—meaning "companion", and later "companion of the emperor, delegate of the emperor". The adjective form of the word is...
Mikhail Fedotovich Kamensky (8 May 1738 – 12 August 1809) was a Russian Field Marshal
Field Marshal
Field Marshal is a military rank. Traditionally, it is the highest military rank in an army.-Etymology:The origin of the rank of field marshal dates to the early Middle Ages, originally meaning the keeper of the king's horses , from the time of the early Frankish kings.-Usage and hierarchical...
prominent in the Catherinian
Catherine II of Russia
Catherine II, also known as Catherine the Great , Empress of Russia, was born in Stettin, Pomerania, Prussia on as Sophie Friederike Auguste von Anhalt-Zerbst-Dornburg...
wars and the Napoleonic campaigns
Napoleonic Wars
The Napoleonic Wars were a series of wars declared against Napoleon's French Empire by opposing coalitions that ran from 1803 to 1815. As a continuation of the wars sparked by the French Revolution of 1789, they revolutionised European armies and played out on an unprecedented scale, mainly due to...
.

Mikhail Kamensky served as a volunteer in the French
France
The French Republic , The French Republic , The French Republic , (commonly known as France , is a unitary semi-presidential republic in Western Europe with several overseas territories and islands located on other continents and in the Indian, Pacific, and Atlantic oceans. Metropolitan France...
army in 1758-1759. He then took part in the Seven Years' War
Seven Years' War
The Seven Years' War was a global military war between 1756 and 1763, involving most of the great powers of the time and affecting Europe, North America, Central America, the West African coast, India, and the Philippines...
. In 1783, Kamensky was appointed Governor General of Ryazan
Ryazan
Ryazan is a city and the administrative center of Ryazan Oblast, Russia. It is located on the Oka River southeast of Moscow. Population: The strategic bomber base Dyagilevo is just west of the city, and the air base of Alexandrovo is to the southeast as is the Ryazan Turlatovo Airport...
and Tambov
Tambov
Tambov is a city and the administrative center of Tambov Oblast, Russia, located at the confluence of the Tsna and Studenets Rivers southeast of Moscow...
guberniya
Guberniya
A guberniya was a major administrative subdivision of the Russian Empire usually translated as government, governorate, or province. Such administrative division was preserved for sometime upon the collapse of the empire in 1917. A guberniya was ruled by a governor , a word borrowed from Latin ,...
s. During the war with Turkey, in 1788, he defeated the Turks at the Moldavian settlement of Gangur. When prince Potemkin fell ill and entrusted his command of the army to Mikhail Kakhovsky, Kamensky refused to subordinate himself, referring to his seniority. For this, he was discharged from military service.

In 1797, Emperor Paul I
Paul I of Russia
Paul I was the Emperor of Russia between 1796 and 1801. He also was the 72nd Prince and Grand Master of the Order of Malta .-Childhood:...
granted Kamensky the title of count and made him retire. In 1806, Kamensky was appointed commander-in-chief
Commander-in-Chief
A commander-in-chief is the commander of a nation's military forces or significant element of those forces. In the latter case, the force element may be defined as those forces within a particular region or those forces which are associated by function. As a practical term it refers to the military...
of the Russian army in Prussia
Prussia
Prussia was a German kingdom and historic state originating out of the Duchy of Prussia and the Margraviate of Brandenburg. For centuries, the House of Hohenzollern ruled Prussia, successfully expanding its size by way of an unusually well-organized and effective army. Prussia shaped the history...
, which had been fighting the French armies of Napoleon. After six days of being in command, on the eve of the battle of Pułtusk, he transferred the command to Feodor Buxhoeveden under pretence of illness and left for his estate near Oryol
Oryol
Oryol or Orel is a city and the administrative center of Oryol Oblast, Russia, located on the Oka River, approximately south-southwest of Moscow...
.

Kamensky was notorious for his maltreatment of his serf
SERF
A spin exchange relaxation-free magnetometer is a type of magnetometer developed at Princeton University in the early 2000s. SERF magnetometers measure magnetic fields by using lasers to detect the interaction between alkali metal atoms in a vapor and the magnetic field.The name for the technique...
s, and he was killed by one of them in 1809. His death occasioned a sentimental poem by Vasily Zhukovsky
Vasily Zhukovsky
Vasily Andreyevich Zhukovsky was the foremost Russian poet of the 1810s and a leading figure in Russian literature in the first half of the 19th century...
. He was the father of Generals Sergei Kamensky
Sergei Mikhailovich Kamensky
Sergei Mikhailovich Kamensky was a Russian infantry general who served in the Napoleonic wars.-Early life:...
and Nikolai Kamensky. The British actress Dame Helen Mirren
Helen Mirren
Dame Helen Mirren, DBE is an English actor. She has won an Academy Award for Best Actress, four SAG Awards, four BAFTAs, three Golden Globes, four Emmy Awards, and two Cannes Film Festival Best Actress Awards.-Early life and family:...
is his great-great-great-great-granddaughter.
The source of this article is wikipedia, the free encyclopedia.  The text of this article is licensed under the GFDL.