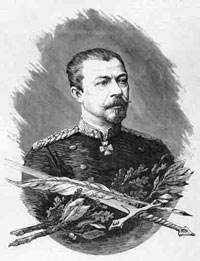 Mikhail Grigorievich Chernyayev (Russian
Russian language
Russian is a Slavic language used primarily in Russia, Belarus, Uzbekistan, Kazakhstan, Tajikistan and Kyrgyzstan. It is an unofficial but widely spoken language in Ukraine, Moldova, Latvia, Turkmenistan and Estonia and, to a lesser extent, the other countries that were once constituent republics...
: Михайл Григорьевич Черняев) (24 October 1828 – 16 August 1898) was a Russian general, who, together with Konstantin Kaufman and Mikhail Skobelev
Mikhail Skobelev
Mikhail Dmitrievich Skobelev was a Russian general famous for his conquest of Central Asia and heroism during the Russo-Turkish War of 1877-78. Dressed in white uniform and mounted on a white horse, and always in the thickest of the fray, he was known and adored by his soldiers as the "White...
, led the Russian conquest of Central Asia
Central Asia
Central Asia is a core region of the Asian continent from the Caspian Sea in the west, China in the east, Afghanistan in the south, and Russia in the north...
under Alexander II
Alexander II of Russia
Alexander II , also known as Alexander the Liberator was the Emperor of the Russian Empire from 3 March 1855 until his assassination in 1881...
.

A member of a noble family, he was educated at the Nicholas Staff College, entered the army in 1847, and distinguished himself in the Crimean War
Crimean War
The Crimean War was a conflict fought between the Russian Empire and an alliance of the French Empire, the British Empire, the Ottoman Empire, and the Kingdom of Sardinia. The war was part of a long-running contest between the major European powers for influence over territories of the declining...
and in the Caucasus
Caucasus
The Caucasus, also Caucas or Caucasia , is a geopolitical region at the border of Europe and Asia, and situated between the Black and the Caspian sea...
. After serving as divisional Chief of Staff in Poland
Poland
Poland , officially the Republic of Poland , is a country in Central Europe bordered by Germany to the west; the Czech Republic and Slovakia to the south; Ukraine, Belarus and Lithuania to the east; and the Baltic Sea and Kaliningrad Oblast, a Russian exclave, to the north...
, he went to Orenburg
Orenburg
Orenburg is a city on the Ural River and the administrative center of Orenburg Oblast, Russia. It lies southeast of Moscow, very close to the border with Kazakhstan. Population: 546,987 ; 549,361 ; Highest point: 154.4 m...
in 1858 as assistant to the commander of the line of the Syr-Darya, and the following year commanded an expedition to support the Kazakh
Kazakhs
The Kazakhs are a Turkic people of the northern parts of Central Asia ....
tribes on the borders of the Aral Sea
Aral Sea
The Aral Sea was a lake that lay between Kazakhstan in the north and Karakalpakstan, an autonomous region of Uzbekistan, in the south...
against the Khanate of Khiva
Khanate of Khiva
The Khanate of Khiva was the name of a Uzbek state that existed in the historical region of Khwarezm from 1511 to 1920, except for a period of Persian occupation by Nadir Shah between 1740–1746. It was the patrilineal descendants of Shayban , the fifth son of Jochi and grandson of Genghis Khan...
. He did duty on the staff of the Army of the Caucasus for a time, and returned to Orenburg as Chief of Staff.

In 1864, having reached the rank of Major-General, Chernyayev made his famous march with 1000 men across the steppes of Turkestan
Turkestan
Turkestan, spelled also as Turkistan, literally means "Land of the Turks".The term Turkestan is of Persian origin and has never been in use to denote a single nation. It was first used by Persian geographers to describe the place of Turkish peoples...
to Chimkent
Shymkent
Shymkent , formerly known as Chimkent , is the capital city of South Kazakhstan Province, the most populated region in Kazakhstan. It is the third most populous city in Kazakhstan behind Almaty and Astana with a population of 629,600 . A major railroad junction on the Turkestan-Siberia Railway, the...
(Shymkent) in the Khanate of Kokand
Khanate of Kokand
The Khanate of Kokand was a state in Central Asia that existed from 1709–1883 within the territory of modern eastern Uzbekistan, southern Kazakhstan, Tajikistan and Kyrgyzstan...
, to meet another Russian column from Semipalatinsk
Semey
Semey , formerly known as Semipalatinsk and Alash-kala , is a city in Kazakhstan, in the northeastern province of East Kazakhstan, near the border with Siberia, around north of Almaty, and southeast of the Russian city of Omsk, along the Irtysh River.-History:The first settlement was in 1718,...
(Semey), in Siberia
Siberia
Siberia is an extensive region constituting almost all of Northern Asia. Comprising the central and eastern portion of the Russian Federation, it was part of the Soviet Union from its beginning, as its predecessor states, the Tsardom of Russia and the Russian Empire, conquered it during the 16th...
, in conjunction with which he successfully stormed Chimkent, and then unsuccessfully attacked Tashkent
Tashkent
Tashkent is the capital of Uzbekistan and of the Tashkent Province. The officially registered population of the city in 2008 was about 2.2 million. Unofficial sources estimate the actual population may be as much as 4.45 million.-Early Islamic History:...
, 130 km farther south. Wintering at Chimkent, he captured Tashkent the following year. This was contrary to his instructions, and although he was received in St. Petersburg with enthusiasm, and presented with a sword of honor by the emperor, he was not again employed in the military service, and retired from it in July 1874.

He bought, and edited with great success, the Russkiy Mir in Slavonic interests, devoting himself to the Pan-Slavism
Pan-Slavism
Pan-Slavism was a movement in the mid-19th century aimed at unity of all the Slavic peoples. The main focus was in the Balkans where the South Slavs had been ruled for centuries by other empires, Byzantine Empire, Austria-Hungary, the Ottoman Empire, and Venice...
. In the summer of 1876 he was appointed Commander-in-Chief of the Serbia
Serbia
Serbia , officially the Republic of Serbia , is a landlocked country located at the crossroads of Central and Southeast Europe, covering the southern part of the Carpathian basin and the central part of the Balkans...
n army, but on entering Turkey
Turkey
Turkey , known officially as the Republic of Turkey , is a Eurasian country located in Western Asia and in East Thrace in Southeastern Europe...
was driven back by Osman Pasha, who followed him into Serbia, defeating him at Zaječar
Zajecar
Zaječar is a city and municipality in the eastern part of Serbia. According to the 2011 census the town has a population of 36,830, and its coordinates are 43.91° North, 22.30° East...
and Javor in July and the campaign in Serbia proved disastrous. He rashly proclaimed Milan Obrenović IV
Milan Obrenovic IV
Milan Obrenović was a Serbian monarch reigning as Prince Milan IV of Serbia from 1868 to 1882 and King Milan I of Serbia from 1882 to 1889.-Early years:...
King Milan I of Serbia in September, and in October Aleksinac
Aleksinac
Aleksinac is a town which is a center of Aleksinac Municipality, located in the Nišava District of Serbia. According to 2011 census, the town has a population of 16,420 inhabitants, while the municipality has 51,462.-Name:...
and Deligrad
Deligrad
Deligrad is a village in the municipality of Aleksinac, Serbia. According to the 2002 census, the village has a population of 211 people....
were in the hands of the Turks, and the road open to Belgrade
Belgrade
Belgrade is the capital and largest city of Serbia. It is located at the confluence of the Sava and Danube rivers, where the Pannonian Plain meets the Balkans. According to official results of Census 2011, the city has a population of 1,639,121. It is one of the 15 largest cities in Europe...
. An armistice was concluded, and Chernyayev resigned his command.

In 1877 he visited Austria
Austria-Hungary
Austria-Hungary , more formally known as the Kingdoms and Lands Represented in the Imperial Council and the Lands of the Holy Hungarian Crown of Saint Stephen, was a constitutional monarchic union between the crowns of the Austrian Empire and the Kingdom of Hungary in...
in connection with his propaganda, but was expelled, and lived for a time in France
France
The French Republic , The French Republic , The French Republic , (commonly known as France , is a unitary semi-presidential republic in Western Europe with several overseas territories and islands located on other continents and in the Indian, Pacific, and Atlantic oceans. Metropolitan France...
. In 1879 he organized a Bulgarian
Bulgarians
The Bulgarians are a South Slavic nation and ethnic group native to Bulgaria and neighbouring regions. Emigration has resulted in immigrant communities in a number of other countries.-History and ethnogenesis:...
rising, but was arrested at Adrianople
Edirne
Edirne is a city in Eastern Thrace, the northwestern part of Turkey, close to the borders with Greece and Bulgaria. Edirne served as the capital city of the Ottoman Empire from 1365 to 1453, before Constantinople became the empire's new capital. At present, Edirne is the capital of the Edirne...
(Edirne) and sent back to Russia. He succeeded Kaufmann as Governor of Turkestan
Russian Turkestan
Russian Turkestan was the western part of Turkestan within the Russian Empire , comprising the oasis region to the south of the Kazakh steppes, but not the protectorates of the Emirate of Bukhara and the Khanate of Khiva.-History:-Establishment:Although Russia had been pushing south into the...
in 1882, but his bellicose plans for the Great Game with the British Empire
British Empire
The British Empire comprised the dominions, colonies, protectorates, mandates and other territories ruled or administered by the United Kingdom. It originated with the overseas colonies and trading posts established by England in the late 16th and early 17th centuries. At its height, it was the...
forced his retirement two years later, when he was appointed a member of the council of war at St. Petersburg. In 1886 his opposition to the Central Asian Military railway caused him to lose his seat in the council. Chernyayev died in 1898 at his country seat in the governorate
Guberniya
A guberniya was a major administrative subdivision of the Russian Empire usually translated as government, governorate, or province. Such administrative division was preserved for sometime upon the collapse of the empire in 1917. A guberniya was ruled by a governor , a word borrowed from Latin ,...
of Mogilev (Mahilyow).