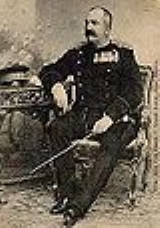 At an early age Milan lost his father. He was subsequently adopted by his cousin, Prince Mihailo.

After the expulsion of the House of Karađorđević in 1858, Mihailo Obrenović returned to Serbia. He became ruling prince of Serbia in 1860, when his father, Miloš, died. During the reign of Mihailo, young Milan was educated at the Lycée Louis le Grand in Paris
Paris
Paris is the capital and largest city in France, situated on the river Seine, in northern France, at the heart of the Île-de-France region...
. There he displayed considerable maturity.

In 1868, when Milan was only fourteen years of age, Prince Mihailo was assassinated. Milan succeeded Mihailo to the throne under a regency. In 1872, Milan was declared of age, and he took government into his own hands. He soon manifested great intellectual power, coupled with a passionate headstrong character. Eugene Schuyler
Eugene Schuyler
Eugene Schuyler was a nineteenth-century American scholar, writer, explorer and diplomat. Schuyler was of the first three Americans to earn a Ph.D. from an American university; and the first American translator of Ivan Turgenev and Lev Tolstoi...
, who saw him about this time, found him a very remarkable, singularly intelligent, and well-informed young man.

Milan carefully balanced the Austrian
Austrian Empire
The Austrian Empire was a modern era successor empire, which was centered on what is today's Austria and which officially lasted from 1804 to 1867. It was followed by the Empire of Austria-Hungary, whose proclamation was a diplomatic move that elevated Hungary's status within the Austrian Empire...
and Russian
Russian Empire
The Russian Empire was a state that existed from 1721 until the Russian Revolution of 1917. It was the successor to the Tsardom of Russia and the predecessor of the Soviet Union...
parties in Serbia, with a judicious leaning towards Austria-Hungary
Austria-Hungary
Austria-Hungary , more formally known as the Kingdoms and Lands Represented in the Imperial Council and the Lands of the Holy Hungarian Crown of Saint Stephen, was a constitutional monarchic union between the crowns of the Austrian Empire and the Kingdom of Hungary in...
. At the end of the Russo-Turkish War, 1877–1878
Russo-Turkish War, 1877–1878
The Russo-Turkish War of 1877–1878 was a conflict between the Ottoman Empire and the Eastern Orthodox coalition led by the Russian Empire and composed of numerous Balkan...
, Prince Milan induced the Porte to acknowledge his independence at the Treaty of Berlin
Treaty of Berlin, 1878
The Treaty of Berlin was the final act of the Congress of Berlin , by which the United Kingdom, Austria-Hungary, France, Germany, Italy, Russia and the Ottoman Empire under Sultan Abdul Hamid II revised the Treaty of San Stefano signed on March 3 of the same year...
.

In 1882, Milan was proclaimed King of Serbia.

Acting under Austrian influence, King Milan devoted all his energies to the improvement of the means of communication and the development of natural resources. However, the cost of this, unduly increased by reckless extravagance, led to disproportionately heavy taxation. This, coupled with increased military service, rendered King Milan and the Austrian party unpopular.

Milan's political troubles were further increased by the defeat of the Serbians in the war against Bulgaria
Serbo-Bulgarian War
The Serbo-Bulgarian War was a war between Serbia and Bulgaria that erupted on 14 November 1885 and lasted until 28 November the same year. Final peace was signed on 19 February 1886 in Bucharest...
from 1885–1886. In September 1885, the union of Eastern Rumelia
Eastern Rumelia
Eastern Rumelia or Eastern Roumelia was an administratively autonomous province in the Ottoman Empire and Principality of Bulgaria from 1878 to 1908. It was under full Bulgarian control from 1885 on, when it willingly united with the tributary Principality of Bulgaria after a bloodless revolution...
and Bulgaria caused widespread agitation in Serbia. Milan promptly declared war upon the new Bulgarian state on November 15. After a short, decisive campaign, the Serbs were utterly routed at the battle of Slivnitsa
Battle of Slivnitsa
Called by historians the "Battle of the captains vs the generals," referring to the young Bulgarian army, whose highest rank went up to a captain, the Battle of Slivnitsa was a decisive factor in the victory of the Bulgarian army over the Serbians on November 17–19, 1885 in the...
and at the battle of Pirot
Battle of Pirot
The Battle of Pirot was a battle between the Bulgarian Western Corps and the Serbian Nishava Army during the Serbo-Bulgarian War. The battle took place on 14 and 15 November 1885 and ended with a Bulgarian victory.-Prelude:...
. Milan's throne was only saved by the direct intervention of Austria-Hungary. Domestic difficulties now arose which rapidly assumed political significance.

In October 1875, Milan had married Natalija Keşco, the sixteen-year old daughter of Piotrj (Petre) Ivanović Keşco. Keşco (Keshko), a Moldavia
Moldavia
Moldavia is a geographic and historical region and former principality in Eastern Europe, corresponding to the territory between the Eastern Carpathians and the Dniester river...
n boyar
Boyar
A boyar, or bolyar , was a member of the highest rank of the feudal Moscovian, Kievan Rus'ian, Bulgarian, Wallachian, and Moldavian aristocracies, second only to the ruling princes , from the 10th century through the 17th century....
, was also a colonel
Colonel
Colonel , abbreviated Col or COL, is a military rank of a senior commissioned officer. It or a corresponding rank exists in most armies and in many air forces; the naval equivalent rank is generally "Captain". It is also used in some police forces and other paramilitary rank structures...
in the Russian army. Keşco's wife, Pulcheria, was by birth a Sturdza (of the princely Sturdza family
Sturdza family
Sturdza, Sturza or Stourdza is the name of an old Romanian family, whose origins can be traced back to the 1540s.The Sturdza family has been long and intimately associated with the government first of Moldavia and afterwards of Romania...
). A son, Alexander, was born to Natalija and Milan in 1876, but the king and queen's relationship showed signs of friction. Milan was anything but a faithful husband, having an affair with most notably Jennie Jerome (wife of Lord Randolph Churchill
Lord Randolph Churchill
Lord Randolph Henry Spencer-Churchill MP was a British statesman. He was the third son of the 7th Duke of Marlborough and his wife Lady Frances Anne Emily Vane , daughter of the 3rd Marquess of Londonderry...
and mother to Winston Churchill
Winston Churchill
Sir Winston Leonard Spencer-Churchill, was a predominantly Conservative British politician and statesman known for his leadership of the United Kingdom during the Second World War. He is widely regarded as one of the greatest wartime leaders of the century and served as Prime Minister twice...
) among others, while Queen Natalija was greatly influenced by Russian sympathies. In 1886, the couple, mismatched both personally and politically, separated.

Natalija withdrew from the kingdom, taking with her the ten-year old Prince Alexander (later King Alexander I). While she was residing at Wiesbaden
Wiesbaden
Wiesbaden is a city in southwest Germany and the capital of the federal state of Hesse. It has about 275,400 inhabitants, plus approximately 10,000 United States citizens...
in 1888, King Milan succeeded in recovering the crown prince, whom he undertook to educate. In reply to the queen's remonstrances, Milan exerted considerable pressure upon the metropolitan, and procured a divorce, which was afterwards annulled as illegal. King Milan now seemed master of the situation.

On January 3, 1889, Milan adopted a new constitution much more liberal than the existing one of 1869. Two months later, on March 6, Milan suddenly abdicated the throne in favor of his son. No satisfactory reason was assigned for this step. Milan settled in Paris as a private individual.

In February 1891, a Radical ministry was formed. Queen Natalija and the ex-metropolitan Mihailo returned to Belgrade, and Austrian influence began to give way to Russian. Fear of a revolution and of King Milan's return led to a compromise, by which, in May 1891, the queen was expelled, and Milan was allowed a million francs from the civil list, on condition of not returning to Serbia during his son's minority.

In March 1892, Milan renounced all his rights and even his Serbian nationality. The situation altered dramatically, however, after the young King Alexander had effected his coup d'etat
Coup d'état
A coup d'état state, literally: strike/blow of state)—also known as a coup, putsch, and overthrow—is the sudden, extrajudicial deposition of a government, usually by a small group of the existing state establishment—typically the military—to replace the deposed government with another body; either...
and taken government into his own hands in April 1893. Serbian politics began to grow more complicated, and Russian influence was rife. In January 1894, Milan suddenly appeared in Belgrade, and his son gladly welcomed his experience and advice.

On April 29, a royal decree reinstated Milan and Natalija, who in the meantime had become ostensibly reconciled, in their position as members of the royal family. On May 21, the constitution of 1869 was restored, and Milan continued to exercise considerable influence over his son. The queen, who had been residing chiefly at Biarritz
Biarritz
Biarritz is a city which lies on the Bay of Biscay, on the Atlantic coast, in south-western France. It is a luxurious seaside town and is popular with tourists and surfers....
, returned to Belgrade in May 1895, after four years of absence, and was greeted by the populace with great enthusiasm.

In 1897, Milan was appointed commander-in-chief of the Serbian army. In this capacity he did some of the best work of his life, and his success in improving the Serbian military system was very marked. His relations with the young king also remained good, and for a time it seemed as though all Russian inroads were being checked. The good relations between father and son were interrupted, however, by the latter's marriage to Draga Mašin in July 1900. Milan violently opposed the match, and resigned his post as commander-in-chief. Alexander subsequently banished Milan from Serbia and threw himself into the arms of Russia. Milan retired to Vienna
Vienna
Vienna is the capital and largest city of the Republic of Austria and one of the nine states of Austria. Vienna is Austria's primary city, with a population of about 1.723 million , and is by far the largest city in Austria, as well as its cultural, economic, and political centre...
and on February 11, 1901, Milan unexpectedly died.

Milan was an able, though headstrong man. In considering Milan's relations with his young son, it must be remembered that in the dynastic and political conditions of contemporary Serbia, the natural feeling in Milan was inevitably subordinate to other considerations.
The source of this article is wikipedia, the free encyclopedia.  The text of this article is licensed under the GFDL.