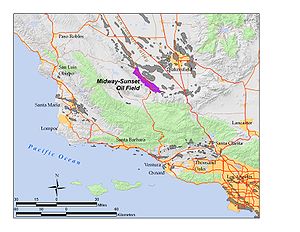 The Midway-Sunset Oil Field is a large oil field
Oil field
An oil field is a region with an abundance of oil wells extracting petroleum from below ground. Because the oil reservoirs typically extend over a large area, possibly several hundred kilometres across, full exploitation entails multiple wells scattered across the area...
in Kern County
Kern County, California
Spreading across the southern end of the California Central Valley, Kern County is the fifth-largest county by population in California. Its economy is heavily linked to agriculture and to petroleum extraction, and there is a strong aviation and space presence. Politically, it has generally...
, San Joaquin Valley
San Joaquin Valley
The San Joaquin Valley is the area of the Central Valley of California that lies south of the Sacramento – San Joaquin River Delta in Stockton...
, California
California
California is a state located on the West Coast of the United States. It is by far the most populous U.S. state, and the third-largest by land area...
in the United States
United States
The United States of America is a federal constitutional republic comprising fifty states and a federal district...
. Discovered in 1894, and having a cumulative production of close to 3 Goilbbl of oil at the end of 2006, it is the largest oil field in California and the third largest in the United States. As of the end of 2008, its estimated remaining reserves amounted to approximately 532 Moilbbl of oil.

The oil field runs southeast to northwest, with a length of approximately twenty miles and a width of three to four, from east of Maricopa
Maricopa, California
Maricopa is a city in Kern County, California, United States. Maricopa is located south-southeast of Taft, at an elevation of 883 feet . The population was 1,154 at the 2010 census, up from 1,111 at the 2000 census. Maricopa lies at the junction of Route 166 and Route 33...
to south of McKittrick
McKittrick, California
McKittrick is a census-designated place in Kern County, California, United States. McKittrick is located northwest of Taft, at an elevation of 1056 feet . The population was 115 at the 2010 census, down from 160 at the 2000 census.-Geography:...
, paralleling the Temblor Range
Temblor Range
The Temblor Range is a mountain range within the California Coast Ranges, at the southwestern extremity of the San Joaquin Valley in California in the United States. It runs in a northwest-southeasterly direction along the borders of Kern County and San Luis Obispo County. The name of the range is...
to the southwest. Most of the oil field is in the Midway Valley and the northeastern foothills of the Temblor Range. To the northeast is the Buena Vista Hills, paralleling the Midway Valley and the Temblors; the mostly exhausted, and partially abandoned Buena Vista Oil Field
Buena Vista Oil Field
The Buena Vista Oil Field, formerly the Naval Petroleum Reserve No. 2 is a large oil field in Kern County, San Joaquin Valley, California in the United States. Discovered in 1909, and having a cumulative production of approximately , it is the tenth-largest oil field in California...
lies beneath this adjacent low range of hills. 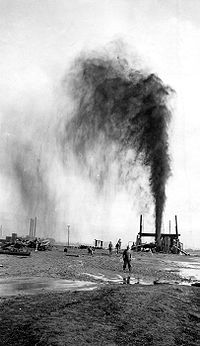 While the Midway-Sunset field is a large contiguous area covering more than 30 square miles (77.7 km²), it consists of 22 identifiable and separately-named pools in six geologic formations, ranging in age from the Pleistocene
Pleistocene
The Pleistocene is the epoch from 2,588,000 to 11,700 years BP that spans the world's recent period of repeated glaciations. The name pleistocene is derived from the Greek and ....
Tulare Formation (the most recent geologically, the closest the surface, and the first to be discovered), to the Temblor Formation, of Miocene
Miocene
The Miocene is a geological epoch of the Neogene Period and extends from about . The Miocene was named by Sir Charles Lyell. Its name comes from the Greek words and and means "less recent" because it has 18% fewer modern sea invertebrates than the Pliocene. The Miocene follows the Oligocene...
age (the oldest, and one of the last to be discovered). Throughout the field, the Tulare is often the capping impermeable formation, underneath which oil collects, but in some areas it is a productive unit in its own right. Its average depth is 200 to 1400 feet (426.7 m).

One of the next pools to be discovered was the Gusher Pool, which, when found in 1909, took its name from the event itself: a large oil gusher. This occurrence was eclipsed spectacularly the next year, when drillers found the Lakeview Pool, unexpectedly drilling into a reservoir of oil under intense pressure, later estimated at approximately 1,300 psi from the heights attained by the spewing oil. The resulting Lakeview Gusher
Lakeview Gusher
Lakeview Gusher Number One was an immense out-of-control pressurized oil well in the Midway-Sunset Oil Field in Kern County, California, resulting in what is the largest single oil spill in history, lasting 18 months and releasing of crude oil. In what was one of the largest oil reserves in...
was the longest-lasting and most productive oil gusher in U.S. history.

Drillers continued to find new oil pools throughout the 20th century, with new discoveries still occurring in the 1980s. The most pools occur in the Miocene
Miocene
The Miocene is a geological epoch of the Neogene Period and extends from about . The Miocene was named by Sir Charles Lyell. Its name comes from the Greek words and and means "less recent" because it has 18% fewer modern sea invertebrates than the Pliocene. The Miocene follows the Oligocene...
-age Monterey Formation
Monterey Formation
The Monterey Formation is an extensive Miocene oil-rich geological sedimentary formation in California, with massive outcroppings of the formation in areas of the California Coast Ranges, Peninsular Ranges, and on some of California's off-shore islands...
, with depths usually to 4900 feet (1,493.5 m), although one discovery, the "PULV" Pool of 1979, was 8700 feet (2,651.8 m) below ground surface. The only well developed at this depth, and the only well in the PULV pool, was abandoned a year after it was drilled. 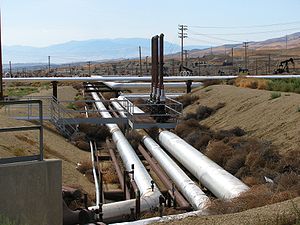 The principal operators of Midway-Sunset, as of 2008, were Aera Energy LLC
Aera Energy LLC
Aera Energy LLC is a natural gas, oil exploration and production company jointly owned by Shell and ExxonMobil headquartered in Bakersfield, California...
, and Chevron Corp.  Other operators on the field included large firms such as Occidental Petroleum
Occidental Petroleum
Occidental Petroleum Corporation is a California-based oil and gas exploration and production company with operations in the United States, the Middle East, North Africa, and South America...
and Plains Exploration & Production
Plains Exploration & Production
Plains Exploration & Production, commonly known by its New York Stock Exchange ticker symbol , is a U.S. petroleum company based in Houston, Texas. A spin-off from Plains Resources, Inc., the company was founded in 2002. Its operations, as of 2009, were all in North America, including California,...
, as well as numerous independents, such as Breitburn Energy, Berry Petroleum, E&B Natural Resources, Crimson Resource Management, and numerous others. As of the end of 2008, the most recent date for which data was available, the field contained 11,494 producing wells, more than any other oil field in California (the Kern River Field
Kern River Oil Field
The Kern River Oil Field is a large oil field in Kern County in the San Joaquin Valley of California, north-northeast of Bakersfield in the lower Sierra foothills...
was second at 9,689). A traveler along State Route 33 between Maricopa and McKittrick will see hundreds of nodding donkeys, the relatively small proportion of the oil wells that are visible from the highway.

Several enhanced oil recovery
Enhanced oil recovery
Enhanced Oil Recovery is a generic term for techniques for increasing the amount of crude oil that can be extracted from an oil field...
technologies have been employed at Midway-Sunset. Since the oil is heavy, and does not flow freely, it can be assisted by thermal methods, which include steamflooding, cyclic steam, and fireflooding. Waterflooding is also used to boost reservoir pressures. 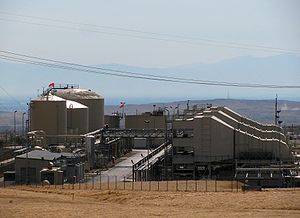 As the Midway-Sunset field has a large amount of heavy oil requiring steam to allow its recovery, many of the field operators have built cogeneration
Cogeneration
Cogeneration is the use of a heat engine or a power station to simultaneously generate both electricity and useful heat....
plants to both sell power to the electric grid and create steam for their operations. This kind of power plant burn natural gas, which is abundantly available right on the field, and converts the energy into both electricity and into steam which is used to flood the heavy oil reservoir in the field itself.

One of the largest of these cogeneration plants, a 225-megawatt facility, was built by The Sun Cogeneration company and a subsidiary of Southern California Edison on the western boundary of the field, along Crocker Springs Road. The plant began operation in 1989, after the permit was approved in 1987; it is now known as the Midway-Sunset Cogeneration Company. The State Energy Commission only allowed construction of the plant after environmental mitigation
Environmental mitigation
Environmental mitigation, compensatory mitigation, or mitigation banking, are terms used primarily by the United States government and the related environmental industry to describe projects or programs intended to offset known impacts to an existing historic or natural resource such as a stream,...
measures, including habitat protection for several endangered species that live in the vicinity, such as the San Joaquin kit fox
Kit Fox
The kit fox is a fox species of North America. Its range is primarily in the southwestern United States and northern and central Mexico. Some mammalogists classify it as conspecific with the swift fox, V. velox, but molecular systematics imply that the two species are distinct.-Range:The...
. In 2008, the company operating the plant refunded $85.7 million to the State of California in a claim lingering from the time of the 2000-2001 California Energy Crisis
California electricity crisis
The California electricity crisis, also known as the Western U.S. Energy Crisis of 2000 and 2001 was a situation in which California had a shortage of electricity caused by market manipulations and illegal shutdowns of pipelines by Texas energy consortiums...
.

Other cogeneration plants on the Midway-Sunset field include the Dome Project by Nuevo Energy (now Plains Exploration & Production
Plains Exploration & Production
Plains Exploration & Production, commonly known by its New York Stock Exchange ticker symbol , is a U.S. petroleum company based in Houston, Texas. A spin-off from Plains Resources, Inc., the company was founded in 2002. Its operations, as of 2009, were all in North America, including California,...
); Aera Energy LLC
Aera Energy LLC
Aera Energy LLC is a natural gas, oil exploration and production company jointly owned by Shell and ExxonMobil headquartered in Bakersfield, California...
; Midset Cogeneration; the Arco Oxford plant near Fellows; a Chevron plant in the hills south of Taft; the M.H. Whittier plant east of Taft; and the Monarch, Berry Petroleum, and Chalk Cliff Cogeneration plants between Maricopa and Taft.

While most the original oil in place has been removed from the field, it still contains an estimated 584 Moilbbl of oil in-situ, which amounts to 18% of California's total estimated reserve of 3.2 Goilbbl.