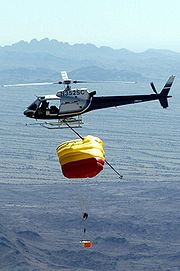 Mid-air retrieval is a technique used in atmospheric reentry
Atmospheric reentry
Atmospheric entry is the movement of human-made or natural objects as they enter the atmosphere of a celestial body from outer space—in the case of Earth from an altitude above the Kármán Line,...
when the reentering vehicle is incapable of a satisfactory unassisted landing. The vehicle is slowed by means of parachute
Parachute
A parachute is a device used to slow the motion of an object through an atmosphere by creating drag, or in the case of ram-air parachutes, aerodynamic lift. Parachutes are usually made out of light, strong cloth, originally silk, now most commonly nylon...
s, and then a specially-equipped aircraft
Aircraft
An aircraft is a vehicle that is able to fly by gaining support from the air, or, in general, the atmosphere of a planet. An aircraft counters the force of gravity by using either static lift or by using the dynamic lift of an airfoil, or in a few cases the downward thrust from jet engines.Although...
matches the vehicle's trajectory and catches it in mid-air.

This is a risky technique, and so is only used when other forms of landing are infeasible. Successful mid-air retrieval requires correct operation of the retrieving aircraft, favourable atmospheric conditions, and successful execution of a tricky manoeuvre, in addition to correct operation of the vehicle itself. Complicating matters, helicopter
Helicopter
A helicopter is a type of rotorcraft in which lift and thrust are supplied by one or more engine-driven rotors. This allows the helicopter to take off and land vertically, to hover, and to fly forwards, backwards, and laterally...
s, which are the optimal aircraft for these operations due to their maneuverability, are particularly prone to mechanical breakdown. These risks can be mitigated somewhat: for example, multiple recovery aircraft can be used. The need for human
Human
Humans are the only living species in the Homo genus...
aviator
Aviator
An aviator is a person who flies an aircraft. The first recorded use of the term was in 1887, as a variation of 'aviation', from the Latin avis , coined in 1863 by G. de la Landelle in Aviation Ou Navigation Aérienne...
s to perform a manoeuvre which would normally be classed as a stunt
Stunt
A stunt is an unusual and difficult physical feat, or any act requiring a special skill, performed for artistic purposes in TV, theatre, or cinema...
may in the future be avoided by advances in unmanned aerial vehicle
Unmanned aerial vehicle
An unmanned aerial vehicle , also known as a unmanned aircraft system , remotely piloted aircraft or unmanned aircraft, is a machine which functions either by the remote control of a navigator or pilot or autonomously, that is, as a self-directing entity...
s.

The first successful mission use of mid-air recovery was on 1960-08-19 when a C-119 recovered film from the Corona mission code-named Discoverer 14
Discoverer 14
Discoverer 14 was a spy satellite used in the Corona program managed by DARPA and the United States Air Force. On 19 August 1960, usable photographic film images taken by the satellite were recovered by a C-119 recovery aircraft...
. This was the first successful recovery of film from an orbiting satellite and the first aerial recovery of an object returning from Earth orbit.

Notable uses of the technique: