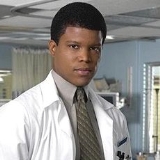 Encyclopedia
Dr. Michael Gallant is a fictional character in the TV series ER
ER (TV series)
ER is an American medical drama television series created by novelist Michael Crichton that aired on NBC from September 19, 1994 to April 2, 2009. It was produced by Constant c Productions and Amblin Entertainment, in association with Warner Bros. Television...
, portrayed by Sharif Atkins
Sharif Atkins
Sharif Atkins is an American television actor. He's best known for his role as Dr. Michael Gallant on ER.- Career :He gained fame for his role as Dr. Michael Gallant, a character that debuted in the eighth season of the NBC Universal Television medical drama ER. He left ER after the 2003-2004...
. He was a regular character from 2001 to 2004 (seasons 8-10).

Michael Emory Gallant first appears at County General Hospital in late 2001 as a medical student in his third year. Coming from a family with a military background, he had previously been on active duty as a member of the US Army Reserves, who is paying for his scholarship. During his time as a student there, he was assigned to Dr. John Carter
John Carter (ER)
Dr. John Truman Carter III, portrayed by Noah Wyle, is a fictional character from the television series ER. The character, called simply "Carter" by most other characters, was introduced in the pilot episode and appeared for eleven consecutive seasons. Wyle decided to leave the show as a regular...
. He initially clashes with Dr. Gregory Pratt, a brash new intern who disparages Gallant's abilities. It comes to a breaking point early on when Pratt cracks a patient's chest without supervision and ropes in Gallant to help. However, over time, the two eventually become firm friends.

Shortly after arriving (season 8), Gallant accompanies Dr. Kerry Weaver to the scene of an ambulance that had been transporting a pregnant woman to hospital and been trapped under fallen power lines. While there, the power lines explode and Gallant saves a fireman from electrocution
Electric shock
Electric Shock of a body with any source of electricity that causes a sufficient current through the skin, muscles or hair. Typically, the expression is used to denote an unwanted exposure to electricity, hence the effects are considered undesirable....
. He then helps Weaver deliver the pregnant woman's baby. The event gives Weaver a lot of respect for Gallant and his ability to keep his head under pressure; so much so in fact that Weaver is happy to call Gallant by his first name (causing Carter to quip "Oh, so it's Michael now?”).

In the following year (season 9), Gallant becomes close to fellow medical student Erin Harkins, though their relationship remains platonic. Later on in the year, Pratt and Gallant are arrested on suspicion of being the two gunmen at the 'Doc Magoos' shooting. Although they are innocent, and subsequently released, the incident shakes Gallant and his faith in the fairness and equality of the police.

By the end of his time at County as a medical student, Gallant decides to apply as an Emergency Medicine intern
Intern
Internship is a system of onthejob training for white-collar jobs, similar to an apprenticeship. Interns are usually college or university students, but they can also be high school students or post graduate adults seeking skills for a new career. They may also be as young as middle school or in...
and matches to County. Despite being a full-fledged doctor, he doesn't have any easier time. Only a few months in to his internship, a helicopter
Helicopter
A helicopter is a type of rotorcraft in which lift and thrust are supplied by one or more engine-driven rotors. This allows the helicopter to take off and land vertically, to hover, and to fly forwards, backwards, and laterally...
crashes in the ambulance
Ambulance
An ambulance is a vehicle for transportation of sick or injured people to, from or between places of treatment for an illness or injury, and in some instances will also provide out of hospital medical care to the patient...
bay and Gallant is in the thick of the action. Later that year, Gallant's sister, Valerie (played by Joy Bryant
Joy Bryant
Joy Bryant is an American actress and former fashion model. Joy currently stars as Jasmine Trussell in Parenthood-Early life:...
), comes to visit. (Valerie's character is the subject of a continuity error. In the Season 8 episode "Secrets and Lies", Gallant says that his twin sister's name is Susan, not Valerie. Gallant had previously stated that she was not a member of the Armed Forces because she had cerebral palsy
Cerebral palsy
Cerebral palsy is an umbrella term encompassing a group of non-progressive, non-contagious motor conditions that cause physical disability in human development, chiefly in the various areas of body movement....
, but when she visits him it is said she has multiple sclerosis
Multiple sclerosis
Multiple sclerosis is an inflammatory disease in which the fatty myelin sheaths around the axons of the brain and spinal cord are damaged, leading to demyelination and scarring as well as a broad spectrum of signs and symptoms...
.) During her stay, she spends the night with Pratt, which strains Gallant and Pratt's friendship, although they manage to remain friends.

At the beginning of Season 10, new medical student Neela Rasgotra
Neela Rasgotra
Dr. Neela Rasgotra is a fictional character portrayed by Parminder Nagra on the television show ER. Following the departure of Goran Visnjic, Maura Tierney, and Mekhi Phifer this left Nagra as the longest term cast member on ER and it also made her character the show's main character so, in terms...
has started her rotation at County. During this time, Gallant is keen in helping her settle in. Around April, Neela accidentally gives a patient the wrong medication. However, Gallant, who is supervising at the time, takes the blame. He then soon reveals that he had feelings for her. However, before they can start a relationship, Gallant reveals to Neela that he has been called up to go to Iraq
Iraq
Iraq ; officially the Republic of Iraq is a country in Western Asia spanning most of the northwestern end of the Zagros mountain range, the eastern part of the Syrian Desert and the northern part of the Arabian Desert....
. They argue, but part on good terms. They kiss before Gallant steps into a taxi and drove away.

Although Gallant had now left County as a regular character, he appeared in a few episodes during the following two seasons. In season 11, one episode kept jumping between County and Iraq. Gallant is now working in a military hospital
Military hospital
Military hospital is a hospital, which is generally located on a military base and is reserved for the use of military personnel, their dependents or other authorized users....
(holding the rank of Captain). At one point, while out working in the field he is wounded by an Iraqi gunman. Gallant manages to shoot and kill his assailant before he can fire again. The incident haunts him, however. As well as treating injured US soldiers, Gallant's unit also treats injured Iraqi civilians. One day, a young girl arrives with severe burns, and Gallant insists that she has to be saved. With his commanding officer's blessing, Gallant organizes for the girl to be treated at County (with Neela's help). He returns to the US with the girl and while on 72 hours leave, he renews his relationship with Neela. He returns to Iraq soon after.

The following season, Gallant returns home to finish his training as a doctor. Overjoyed in seeing each other again, Gallant and Neela make an impulsive decision to get married. They buy a house together and look ready to start a whole new life together. However, Gallant has a few emotional scars from the war; he revealed to Neela that he is going to counseling sessions for veteran
Veteran
A veteran is a person who has had long service or experience in a particular occupation or field; " A veteran of ..."...
s, before revealing that he wants to finish his training in Iraq, by volunteering for a second tour of duty. Neela is shocked and angry with Gallant, but realizes that there is nothing she can do or say to stop him from going. For the third time, the two lovers part.

Gallant makes his final appearance in the penultimate episode of Season 12 "The Gallant Hero and the Tragic Victor." He is on a convoy of trucks, when the unit is ambushed by Iraqi insurgent
Iraqi insurgency
The Iraqi Resistance is composed of a diverse mix of militias, foreign fighters, all-Iraqi units or mixtures opposing the United States-led multinational force in Iraq and the post-2003 Iraqi government...
s. Gallant goes to the aid of a fallen officer and the convoy manages to escape. Gallant is unable to save the officer, however. Just as he has settled back down, a roadside bomb
Improvised explosive device
An improvised explosive device , also known as a roadside bomb, is a homemade bomb constructed and deployed in ways other than in conventional military action...
hits the truck and Gallant and the men on the truck were killed instantly. Gallant's last words are, "My wife Neela's a doc--" before the bomb explodes. Two officers visit the ER later on and informs Neela of his death. The whole ER is shocked, especially Pratt, who takes his death hard. Gallant's belongings are given to Neela and it is revealed that he recorded himself on tape as a message to her just in case he died. On the tape, Michael apologizes to Neela for leaving her for Iraq.

Gallant's parents, Pratt and a shell-shocked Neela attend his funeral in the season 12 finale, "Twenty One Guns". At his funeral, which has full Military Honors, Neela is presented with an American flag draped over his coffin, as well as his posthumously awarded Bronze Star
Bronze Star Medal
The Bronze Star Medal is a United States Armed Forces individual military decoration that may be awarded for bravery, acts of merit, or meritorious service. As a medal it is awarded for merit, and with the "V" for valor device it is awarded for heroism. It is the fourth-highest combat award of the...
and Purple Heart
Purple Heart
The Purple Heart is a United States military decoration awarded in the name of the President to those who have been wounded or killed while serving on or after April 5, 1917 with the U.S. military. The National Purple Heart Hall of Honor is located in New Windsor, New York...
. Neela blames Michael's father for his death, saying that he could have stopped Michael from going to Iraq, but Pratt said that after his own travels to the war zone of the Sudan
Sudan
Sudan , officially the Republic of the Sudan , is a country in North Africa, sometimes considered part of the Middle East politically. It is bordered by Egypt to the north, the Red Sea to the northeast, Eritrea and Ethiopia to the east, South Sudan to the south, the Central African Republic to the...
he understands why Gallant felt that he needed to return to Iraq.

During the 15th and final season of ER, at the end of the episode "The Book of Abby", long-serving nurse Haleh Adams shows the departing Abby Lockhart
Abby Lockhart
Dr. Abby Lockhart is a fictional medical doctor on the television series ER. She is portrayed by Maura Tierney...
a closet wall where all the past doctors and employees have put their locker name tags. Among them, the tag "Gallant" can be seen.
The source of this article is wikipedia, the free encyclopedia.  The text of this article is licensed under the GFDL.