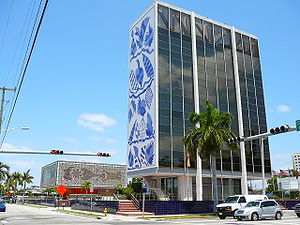 Miami Modernist Architecture or better known as MiMo, is a style of architecture from the 1950s and 1960s that originated in Miami, Florida
Miami, Florida
Miami is a city located on the Atlantic coast in southeastern Florida and the county seat of Miami-Dade County, the most populous county in Florida and the eighth-most populous county in the United States with a population of 2,500,625...
as a resort vernacular unique to Miami and Miami Beach. It was a popular response to the various modernist and post world war architectural movements that were taking place in other parts of the world, adding glamour, fun, and material excess to otherwise stark, minimalist, and efficient styles. Miami Modernism was heavily concentrated in Middle and Upper Miami Beach along Collins Avenue
Collins Avenue
Collins Avenue runs parallel to the Atlantic Ocean in Miami Beach, Florida, one block west. It is also State Road A1A. Collins Avenue was named for John S...
, as well as, along the Biscayne Boulevard corridor starting from around Midtown
Midtown Miami
Midtown Miami is the collective term for the Wynwood and Edgewater neighborhoods of Miami, Florida, United States, north of Downtown and south of the Miami Design District. It is roughly bound by North 29th Street to the south, I-195 to the north, I-95 to the west and Biscayne Bay to the east.In...
, through the Design District and into the Upper Eastside.

Today, the area along Biscayne Boulevard is the designated MiMo Biscayne Boulevard Historic District or also known as "MiMo on BiBo", for "Miami Modern on Biscayne Boulevard". MiMo Historic District runs roughly from 50th Street to 77th Street along Biscayne Boulevard, although MiMo can be found heavily in the Design District and Midtown
Midtown Miami
Midtown Miami is the collective term for the Wynwood and Edgewater neighborhoods of Miami, Florida, United States, north of Downtown and south of the Miami Design District. It is roughly bound by North 29th Street to the south, I-195 to the north, I-95 to the west and Biscayne Bay to the east.In...
. Many annual festivals are held to promote MiMo architecture, such as "Cinco de MiMo" a play on "Cinco de Mayo" in early May.

The umbrella term "Miami Modernism", or "MiMo" for short has only recently been coined to recognize this particular style native to Miami. The term was coined by Miami Beach resident Randall C. Robinson and interior designer Teri D'Amico. Prime examples of "MiMO" architecture include the Fontainebleau Hotel
Fontainebleau Hotel
The Fontainebleau Miami Beach or the Fontainebleau Hotel is one of the most historically and architecturally significant hotels on Miami Beach. Opened in 1954 and designed by Morris Lapidus, it was considered the most luxurious hotel on Miami Beach, and is thought to be the most significant...
, Eden Roc
Eden Roc (hotel)
The Eden Roc Renaissance Hotel Miami Beach is a resort and spa located at 4525 Collins Avenue on Miami Beach, Florida. It was designed by Morris Lapidus, in the Miami Modern style, and opened in 1956...
, Seacoast Towers, Deauville, and Di Lido hotels by famed architect Morris Lapidus
Morris Lapidus
Morris Lapidus was the architect of Neo-baroque Miami Modern hotels that has since come to define the 1950s resort-hotel style synonymous with Miami and Miami Beach....
and Norman Giller's Carillon Hotel which was voted Miami Beach's "Hotel of the Year" in 1959, and the original Diplomat Hotel in Hollywood, Florida
Hollywood, Florida
-Demographics:As of 2000, there were 59,673 households out of which 24.9% had children under the age of 18 living with them, 41.5% were married couples living together, 11.9% had a female householder with no husband present, and 42.2% were non-families. 34.4% of all households were made up of...
.

The MiMo District, also known as the Biscayne Boulevard Historic District, is a neighborhood in Miami. It lies within the larger enclave of Upper Eastside. It is bounded by the Little River to the north, Bay Point Estates to the south, the Florida East Coast Railway
Florida East Coast Railway
The Florida East Coast Railway is a Class II railroad operating in the U.S. state of Florida; in the past, it has been a Class I railroad.Built primarily in the last quarter of the 19th century and the first decade of the 20th century, the FEC was a project of Standard Oil principal Henry Morrison...
to the west, and Biscayne Bay
Biscayne Bay
Biscayne Bay is a lagoon that is approximately 35 miles long and up to 8 miles wide located on the Atlantic coast of South Florida, United States. It is usually divided for purposes of discussion and analysis into three parts: North Bay, Central Bay, and South Bay. Its area is...
to the east.

The name is an acronym for Miami Modern Architecture. There are many examples of the architecture within the district.