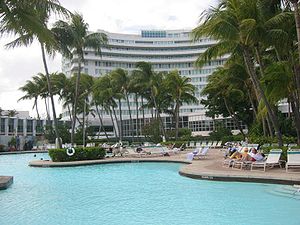 Collins Avenue runs parallel to the Atlantic Ocean
Atlantic Ocean
The Atlantic Ocean is the second-largest of the world's oceanic divisions. With a total area of about , it covers approximately 20% of the Earth's surface and about 26% of its water surface area...
in Miami Beach, Florida
Miami Beach, Florida
Miami Beach is a coastal resort city in Miami-Dade County, Florida, United States, incorporated on March 26, 1915. The municipality is located on a barrier island between the Atlantic Ocean and Biscayne Bay, the latter which separates the Beach from Miami city proper...
, one block west. It is also State Road A1A
State Road A1A (Florida)
State Road A1A is a Florida State Road that runs mostly along the Atlantic Ocean, with sections from Key West at the southern tip of Florida, to Callahan, just south of Georgia. It is the main road through most oceanfront towns. SR A1A is designated the A1A Scenic and Historic Coastal Highway, a...
. Collins Avenue was named for John S. Collins
John S. Collins
John Stiles Collins was an American Quaker farmer from Moorestown Township, New Jersey who moved to southern Florida and attempted to grow vegetables and coconuts on the swampy, bug-infested stretch of land between Miami and the ocean, a barrier island which became Miami Beach.Although the farming...
a developer who completed the first bridge connecting Miami beach to the mainland across Biscayne Bay
Biscayne Bay
Biscayne Bay is a lagoon that is approximately 35 miles long and up to 8 miles wide located on the Atlantic coast of South Florida, United States. It is usually divided for purposes of discussion and analysis into three parts: North Bay, Central Bay, and South Bay. Its area is...
.

Collins is home to many historic Art Deco
Art Deco
Art deco , or deco, is an eclectic artistic and design style that began in Paris in the 1920s and flourished internationally throughout the 1930s, into the World War II era. The style influenced all areas of design, including architecture and interior design, industrial design, fashion and...
hotels, and several nightclubs to the north, including Mynt and Rokbar. North of 41st St. this boulevard lies between the Atlantic Ocean and the Indian Creek, lined by palm trees, and famous hotels from the 50s and 60s such as the Eden Roc and the Morris Lapidus
Morris Lapidus
Morris Lapidus was the architect of Neo-baroque Miami Modern hotels that has since come to define the 1950s resort-hotel style synonymous with Miami and Miami Beach....
-designed Fontainebleau Hotel
Fontainebleau Hotel
The Fontainebleau Miami Beach or the Fontainebleau Hotel is one of the most historically and architecturally significant hotels on Miami Beach. Opened in 1954 and designed by Morris Lapidus, it was considered the most luxurious hotel on Miami Beach, and is thought to be the most significant...
, built in the curvy, flamboyant Neo-baroque
Neo-baroque
The Baroque Revival or Neo-baroque was an architectural style of the late 19th century. The term is used to describe architecture which displays important aspects of Baroque style, but is not of the Baroque period proper—i.e., the 17th and 18th centuries.Some examples of Neo-baroque architecture:*...
fashion that defined the 1950s 'Miami Beach' resort hotel style. Coined as "Millionaires Row," Collins Avenue is lined by historic hotels such as The Wyndham Miami Beach Resort, formerly known as Westin Resort, formerly known as the Doral Hotel
Doral Hotel
The Doral-On-The-Ocean opened in 1963 on the famous Millionaire's Row, on Collins Avenue in Miami Beach, Florida. Also known as the Doral Beach Hotel, it was named for its founder and his wife, DORIS and AL Kaskel. It was long considered the most elegant and luxurious hotel in the area. The Doral...
. The annual Miami International Boat Show
Miami International Boat Show
The Miami International Boat Show is an annual event in February, produced by the in Miami and Miami Beach, Florida, United States. It is currently held in three separate venues; two in Downtown Miami, and the other in Miami Beach. Over 1,700 companies that are NMMA members, produce more than 80%...
occurs on Collins Avenue. Today it boasts many of the most famous and trendy hotels along on the famous avenue, these include: Alexander, Aqua, Beachcomber, Blue Moon, Carlton, Circa39, Claridge, Delano, Dorchester, EdenRoc, Essex House, Fontainebleau, Gansevoort, Haddon Hall, Kent, Loews, Lorraine, Marseilles, Mercury, Metropole, Ocean Spray, The Palms, Parisian, President, Raleigh, Richmond, Royal Palm, Sadigo, Sagamore, Setai, Shelborne, Sherbrooke, Shore Club, South Seas, Sovereign, Surfcomber, W South Beach, Whitelaw and many others.