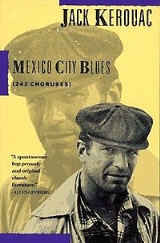 Encyclopedia
Mexico City Blues is a poem
Poetry
Poetry is a form of literary art in which language is used for its aesthetic and evocative qualities in addition to, or in lieu of, its apparent meaning...
published by Jack Kerouac
Jack Kerouac
Jean-Louis "Jack" Lebris de Kerouac was an American novelist and poet. He is considered a literary iconoclast and, alongside William S. Burroughs and Allen Ginsberg, a pioneer of the Beat Generation. Kerouac is recognized for his spontaneous method of writing, covering topics such as Catholic...
in 1959 composed of 242 "choruses" or stanza
Stanza
In poetry, a stanza is a unit within a larger poem. In modern poetry, the term is often equivalent with strophe; in popular vocal music, a stanza is typically referred to as a "verse"...
s. In his own words, Kerouac wanted to be known as a jazz poet
Jazz poetry
Jazz poetry is poetry that "demonstrates jazz-like rhythm or the feel of improvisation". During the 1920s, several poets began to eschew the conventions of rhythm and style; among these were Ezra Pound, T. S. Eliot, and E. E. Cummings...
and with this book he sought to write in a way consistent with how a musician would play jazz
Jazz
Jazz is a musical style that originated at the beginning of the 20th century in African American communities in the Southern United States. It was born out of a mix of African and European music traditions. From its early development until the present, jazz has incorporated music from 19th and 20th...
.