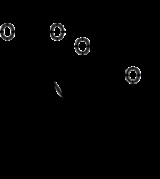 Encyclopedia
Metalaxyl is a phenylamide fungicide
Fungicide
Fungicides are chemical compounds or biological organisms used to kill or inhibit fungi or fungal spores. Fungi can cause serious damage in agriculture, resulting in critical losses of yield, quality and profit. Fungicides are used both in agriculture and to fight fungal infections in animals...
with systemic
Systemic
Systemic refers to something that is spread throughout, system-wide, affecting a group or system such as a body, economy, market or society as a whole. Systemic may also refer to:-In medicine:...
function. Its chemical name is methyl N-(methoxyacetyl)-N-(2,6-xylyl)-DL-alaninate. It can be used to control Pythium
Pythium
Pythium is a genus of parasitic oomycete. Most species are plant parasites, but Pythium insidiosum is an important pathogen of animals...
in a number of vegetable
Vegetable
The noun vegetable usually means an edible plant or part of a plant other than a sweet fruit or seed. This typically means the leaf, stem, or root of a plant....
crops, and Phytophthora
Phytophthora
Phytophthora is a genus of plant-damaging Oomycetes , whose member species are capable of causing enormous economic losses on crops worldwide, as well as environmental damage in natural ecosystems. The genus was first described by Heinrich Anton de Bary in 1875...
in pea
Pea
A pea is most commonly the small spherical seed or the seed-pod of the pod fruit Pisum sativum. Each pod contains several peas. Peapods are botanically a fruit, since they contain seeds developed from the ovary of a flower. However, peas are considered to be a vegetable in cooking...
s.

It is the active ingredient in the seed treatment agent Apron XL LS.

The fungicide has suffered severe resistance
Pesticide resistance
Pesticide resistance is the adaptation of pest population targeted by a pesticide resulting in decreased susceptibility to that chemical. In other words, pests develop a resistance to a chemical through natural selection: the most resistant organisms are the ones to survive and pass on their...
problems. The fungicide was marketed for use against Phytophthora infestans
Phytophthora infestans
Phytophthora infestans is an oomycete that causes the serious potato disease known as late blight or potato blight. . Late blight was a major culprit in the 1840s European, the 1845 Irish and 1846 Highland potato famines...
. However in the summer of 1980, in the Republic of Ireland
Republic of Ireland
Ireland , described as the Republic of Ireland , is a sovereign state in Europe occupying approximately five-sixths of the island of the same name. Its capital is Dublin. Ireland, which had a population of 4.58 million in 2011, is a constitutional republic governed as a parliamentary democracy,...
, the crop was devastated by a potato blight epidemic after a resistant race
Race (biology)
In biology, races are distinct genetically divergent populations within the same species with relatively small morphological and genetic differences. The populations can be described as ecological races if they arise from adaptation to different local habitats or geographic races when they are...
of the oomycete appeared. Irish farmer
Farmer
A farmer is a person engaged in agriculture, who raises living organisms for food or raw materials, generally including livestock husbandry and growing crops, such as produce and grain...
s later successfully sued the company for their losses.
The source of this article is wikipedia, the free encyclopedia.  The text of this article is licensed under the GFDL.