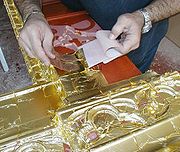 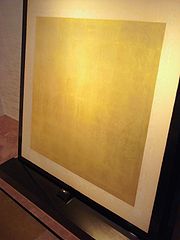 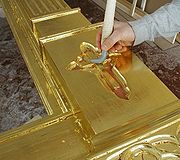 Metal leaf, also called composition leaf or schlagmetal, is a thin foil used for decoration. Metal leaf can come in many different shades. Some metal leaf may look like gold leaf
Gold leaf
right|thumb|250px|[[Burnishing]] gold leaf with an [[agate]] stone tool, during the water gilding processGold leaf is gold that has been hammered into extremely thin sheets and is often used for gilding. Gold leaf is available in a wide variety of karats and shades...
but not contain any real gold. This metal leaf is often referred to as imitation leaf.

Metal leaf is usually made of gold
Gold
Gold is a chemical element with the symbol Au and an atomic number of 79. Gold is a dense, soft, shiny, malleable and ductile metal. Pure gold has a bright yellow color and luster traditionally considered attractive, which it maintains without oxidizing in air or water. Chemically, gold is a...
(including many alloys), silver
Silver
Silver is a metallic chemical element with the chemical symbol Ag and atomic number 47. A soft, white, lustrous transition metal, it has the highest electrical conductivity of any element and the highest thermal conductivity of any metal...
, copper
Copper
Copper is a chemical element with the symbol Cu and atomic number 29. It is a ductile metal with very high thermal and electrical conductivity. Pure copper is soft and malleable; an exposed surface has a reddish-orange tarnish...
, aluminium
Aluminium
Aluminium or aluminum is a silvery white member of the boron group of chemical elements. It has the symbol Al, and its atomic number is 13. It is not soluble in water under normal circumstances....
, brass
Brass
Brass is an alloy of copper and zinc; the proportions of zinc and copper can be varied to create a range of brasses with varying properties.In comparison, bronze is principally an alloy of copper and tin...
(typically 85 % Copper and 15% zinc
Zinc
Zinc , or spelter , is a metallic chemical element; it has the symbol Zn and atomic number 30. It is the first element in group 12 of the periodic table. Zinc is, in some respects, chemically similar to magnesium, because its ion is of similar size and its only common oxidation state is +2...
) or palladium
Palladium
Palladium is a chemical element with the chemical symbol Pd and an atomic number of 46. It is a rare and lustrous silvery-white metal discovered in 1803 by William Hyde Wollaston. He named it after the asteroid Pallas, which was itself named after the epithet of the Greek goddess Athena, acquired...
, sometimes also platinum
Platinum
Platinum is a chemical element with the chemical symbol Pt and an atomic number of 78. Its name is derived from the Spanish term platina del Pinto, which is literally translated into "little silver of the Pinto River." It is a dense, malleable, ductile, precious, gray-white transition metal...
.

Vark
Vark
Vark, Varak, Varakh or Varkh, Varq is any foil / layer of very pure, typically silver, used for garnishing Indian sweets. The silver is edible, though flavorless. Large quantities of ingested elemental silver can cause argyria, but the use of vark is not considered harmful to the body, since the...
is a type of silver leaf used for decoration in Indian cuisine.