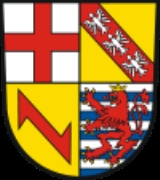 Encyclopedia
Merzig-Wadern is a Kreis (district
District
Districts are a type of administrative division, in some countries managed by a local government. They vary greatly in size, spanning entire regions or counties, several municipalities, or subdivisions of municipalities.-Austria:...
) in the northwest of the Saarland
Saarland
Saarland is one of the sixteen states of Germany. The capital is Saarbrücken. It has an area of 2570 km² and 1,045,000 inhabitants. In both area and population, it is the smallest state in Germany other than the city-states...
, Germany
Germany
Germany , officially the Federal Republic of Germany , is a federal parliamentary republic in Europe. The country consists of 16 states while the capital and largest city is Berlin. Germany covers an area of 357,021 km2 and has a largely temperate seasonal climate...
. Neighboring districts are Trier-Saarburg
Trier-Saarburg
Trier-Saarburg is a district in the west of Rhineland-Palatinate, Germany. Neighboring districts are Bitburg-Prüm, Bernkastel-Wittlich, Birkenfeld, Sankt Wendel , and Merzig-Wadern . To the west it borders Luxembourg...
, Sankt Wendel
Sankt Wendel (district)
Sankt Wendel is a Kreis in the north of the Saarland, Germany. Neighboring districts are Trier-Saarburg, Birkenfeld, Kusel, Neunkirchen, Saarlouis, and Merzig-Wadern.-History:...
, Saarlouis
Saarlouis (district)
Saarlouis is a Kreis in the middle of the Saarland, Germany. Neighboring districts are Merzig-Wadern, Sankt Wendel, Neunkirchen, Saarbrücken, and the French département Moselle.-History:...
, and the French
France
The French Republic , The French Republic , The French Republic , (commonly known as France , is a unitary semi-presidential republic in Western Europe with several overseas territories and islands located on other continents and in the Indian, Pacific, and Atlantic oceans. Metropolitan France...
département Moselle
Moselle
Moselle is a department in the east of France named after the river Moselle.- History :Moselle is one of the original 83 departments created during the French Revolution on March 4, 1790...
, and Luxembourg
Luxembourg
Luxembourg , officially the Grand Duchy of Luxembourg , is a landlocked country in western Europe, bordered by Belgium, France, and Germany. It has two principal regions: the Oesling in the North as part of the Ardennes massif, and the Gutland in the south...
.

The district was created in 1816 when the area became property of Prussia
Prussia
Prussia was a German kingdom and historic state originating out of the Duchy of Prussia and the Margraviate of Brandenburg. For centuries, the House of Hohenzollern ruled Prussia, successfully expanding its size by way of an unusually well-organized and effective army. Prussia shaped the history...
. After World War I
World War I
World War I , which was predominantly called the World War or the Great War from its occurrence until 1939, and the First World War or World War I thereafter, was a major war centred in Europe that began on 28 July 1914 and lasted until 11 November 1918...
the Saar area was under special government of the League of Nations
League of Nations
The League of Nations was an intergovernmental organization founded as a result of the Paris Peace Conference that ended the First World War. It was the first permanent international organization whose principal mission was to maintain world peace...
, which split the district into two. The area around Wadern stayed Prussian, while the Merzig area became part of the Saar area. In 1935, the Saar area rejoined Germany; however, it took till after the World War II
World War II
World War II, or the Second World War , was a global conflict lasting from 1939 to 1945, involving most of the world's nations—including all of the great powers—eventually forming two opposing military alliances: the Allies and the Axis...
that the two parts of the district were reunited in 1946.

The Saar River
Saar River
The Saar is a river in northeastern France and western Germany, and a right tributary of the Moselle. It rises in the Vosges mountains on the border of Alsace and Lorraine and flows northwards into the Moselle near Trier. It has two headstreams , that both start near Mont Donon, the highest peak...
flows through the district, the Moselle River
Moselle River
The Moselle is a river flowing through France, Luxembourg, and Germany. It is a left tributary of the Rhine, joining the Rhine at Koblenz. A small part of Belgium is also drained by the Mosel through the Our....
forms the boundary in the west to Luxembourg
Luxembourg
Luxembourg , officially the Grand Duchy of Luxembourg , is a landlocked country in western Europe, bordered by Belgium, France, and Germany. It has two principal regions: the Oesling in the North as part of the Ardennes massif, and the Gutland in the south...
.