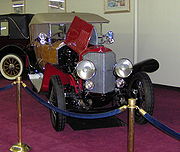 Mercedes was a brand of the Daimler-Motoren-Gesellschaft (DMG). DMG which began to develop in 1900, after the death of its co-founder, Gottlieb Daimler
Gottlieb Daimler
Gottlieb Daimler was an engineer, industrial designer and industrialist born in Schorndorf , in what is now Germany. He was a pioneer of internal-combustion engines and automobile development...
. Although the name was not lodged as a trade name
Trade name
A trade name, also known as a trading name or a business name, is the name which a business trades under for commercial purposes, although its registered, legal name, used for contracts and other formal situations, may be another....
until 23 June 1902 and had to wait until 26 September to be registered legally, the brand name eventually would be applied to an automobile model built by Wilhelm Maybach
Wilhelm Maybach
Wilhelm Maybach was an early German engine designer and industrialist. During the 1890s he was hailed in France, then the world centre for car production, as the "King of constructors"....
to specifications by Emil Jellinek
Emil Jellinek
Emil Jellinek, known after 1903 as Emil Jellinek-Mercedes was a wealthy European entrepreneur who sat on the board of Daimler-Motoren-Gesellschaft between 1900 and 1909. He specified an engine designed there by Wilhelm Maybach and Gottlieb Daimler for the first 'modern' car...
that was delivered to him on 22 December 1900. By Jellinek's contract, the new model contained a newly designed engine designated "Daimler-Mercedes". This engine name is the first instance of the use of the name, Mercedes, by DMG. The automobile model would later be called, the Mercedes 35 hp
Mercedes 35 hp
The Mercedes 35 hp was a radical early car model designed in 1901 by Wilhelm Maybach and Paul Daimler, for Emil Jellinek. Produced in Stuttgart, Germany, by the Daimler Motoren Gesellschaft , it began the Mercedes line of cars .A significant advancement over the previous generation of...
.

An Austrian diplomat based in Nice, a business man running a profitable business selling cars, and a racing enthusiast, Jellinek had been racing DMG automobiles under the pseudonym Mercédès, after his daughter, Mercédès Jellinek
Mércédès Jellinek
Mercédès Adriana Manuela Ramona Jellinek called Mercédès was the daughter of Austrian automobile entrepreneur Emil Jellinek and his wife Rachel Goggmann Cenrobert. She was born on September 16, 1889 and named as a term of endearment Mercedes...
. Later he contracted with DMG for a small series of dedicated sports cars containing an engine that officially bore his daughter's name. He raced them very successfully, gaining recognition that increased interest in customers and Jellinek was placed on the board of directors of DMG. This model was a significant advancement in the history of automobiles. The model was released for sale in 1901 under the name of Mercedes 35 hp and, because of the success of the model, DMG began to apply the name as a series to other models such as, Mercedes 8/11 hp and Mercedes 40 hp Simplex. Jellinek seems to have become obsessed with the name and even had his name changed to Jellinek-Mercedes. Maybach quit DMG in 1907 and started up his own business.

The name, Mercedes, later was used to represent DMG in another new brand name, Mercedes-Benz
Mercedes-Benz
Mercedes-Benz is a German manufacturer of automobiles, buses, coaches, and trucks. Mercedes-Benz is a division of its parent company, Daimler AG...
, created in 1926 when it was applied to all vehicles produced by the new company, Daimler-Benz AG, resulting from the merger of Benz & Cie. and Daimler Motoren Gesellschaft
Daimler Motoren Gesellschaft
Daimler-Motoren-Gesellschaft was a German engine and later automobile manufacturer, in operation from 1890 until 1926. Founded by Gottlieb Daimler and Wilhelm Maybach, it was based first in Cannstatt...
in that year. The last name of Karl Benz
Karl Benz
Karl Friedrich Benz, was a German engine designer and car engineer, generally regarded as the inventor of the gasoline-powered car, and together with Bertha Benz pioneering founder of the automobile manufacturer Mercedes-Benz...
was retained in the new brand, but since DMG had sold exclusive licences to foreign companies, they couldn't use the name of their founder, Daimler, legally in all countries and decided to use the name of their most popular model. Since Jellinek was a member of the board of directors by the time of the merger, the name was promoted for continued good luck to the new company.


History of the beginning of the Mercedes series

Mercedes was a brand in the Daimler Motoren Gesellschaft (DMG) which began to develop in 1901, after the death of its co-founder, Gottlieb Daimler.

On 30 March 1900, a few weeks after the death of Gottlieb Daimler, Wilhelm Bauer decided spontaneously to enter the Nice-La Turbie hill climb
Hillclimbing
Hillclimbing is a branch of motorsport in which drivers compete against the clock to complete an uphill course....
but crashed fatally after hitting a rock on the first turn while avoiding spectators. This caused DMG to abandon racing.

Nonetheless, Emil Jellinek
Emil Jellinek
Emil Jellinek, known after 1903 as Emil Jellinek-Mercedes was a wealthy European entrepreneur who sat on the board of Daimler-Motoren-Gesellschaft between 1900 and 1909. He specified an engine designed there by Wilhelm Maybach and Gottlieb Daimler for the first 'modern' car...
came to an agreement with DMG on 2 April 1900 by promising the large sum of 550,000 Goldmark
German gold mark
The Goldmark was the currency used in the German Empire from 1873 to 1914.-History:Before unification, the different German states issued a variety of different currencies, though most were linked to the Vereinsthaler, a silver coin containing 16⅔ grams of pure silver...
if Wilhelm Maybach
Wilhelm Maybach
Wilhelm Maybach was an early German engine designer and industrialist. During the 1890s he was hailed in France, then the world centre for car production, as the "King of constructors"....
would design a revolutionary sports car
Sports car
A sports car is a small, usually two seat, two door automobile designed for high speed driving and maneuverability....
for him, later to be called the Mercedes 35 hp
Mercedes 35 hp
The Mercedes 35 hp was a radical early car model designed in 1901 by Wilhelm Maybach and Paul Daimler, for Emil Jellinek. Produced in Stuttgart, Germany, by the Daimler Motoren Gesellschaft , it began the Mercedes line of cars .A significant advancement over the previous generation of...
, of which 36 units had to be delivered before 15 October. The contract also included an order for 36 standard DMG 8 hp cars. Jellinek soon became a member of the DMG Board of Management and obtained the exclusive dealership for the model—that would become the new Mercedes 35 hp—for France, Austria, Hungary, Belgium, and United States of America. The first one was not delivered to Jellinek until 22 December, however.

Jellinek laid down strict specifications for the new model stating "I don't want a car for today or tomorrow, it will be the car of the day after tomorrow". He itemized many new parameters to overcome the problems found in many of the ill-designed "horseless carriages" of the time which made automobiles unsuitable for high speeds and at risk of overturning:

A new engine, developed for the model, would be called the Daimler-Mercedes engine, officially, which the DMG chairman accepted readily as it overcame the problem of the Daimler name in France being owned by Panhard & Levassor.

Over the next few months, Jellinek oversaw the development of the new car—at first by daily telegrams—and later by traveling to Stuttgart. He took delivery of the first one on 22 December 1900, at Nice's railway station—it had already been sold to the Baron Henry of Rothschild, who also had raced cars in Nice.

In 1901, the car amazed the automobile world. Jellinek again won the Nice races, easily beating his opponents in all the capacity classes and reaching 60 km/h. The director of the French Automobile Club
French Automobile Club
The Automobile Club of France is a men's club founded on November 12, 1895 by Albert de Dion, Paul Meyan, and its first president, the Dutch-born Baron, Etienne van Zuylen van Nijevelt....
, Paul Meyan, stated: "We have entered the Mercedes era", a sentiment echoed by newspapers worldwide.

The records set by the new Mercedes 35 hp model amazed the entire automobile world. DMG's sales shot up, its Stuttgart plant was operating at full capacity, and it was consolidating its future as an automobile manufacturer—rather than merely an engine manufacturer who built some automobiles. The number of employees steadily increased from 340 in 1900 to 2,200 in 1904.

Mercedes was not lodged as a trade name for DMG automobile models until 23 June 1902, but soon the company decided to use the name as the trade name for its entire line of automobile models—and officially registered it on 26 September 1902.
The source of this article is wikipedia, the free encyclopedia.  The text of this article is licensed under the GFDL.