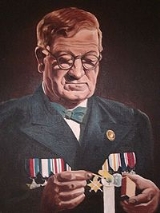 Encyclopedia
The Memorable Order of Tin Hats, known as The MOTH, was founded in 1927 by Charles Evenden
Charles Evenden
Charles Evenden, soldier, cartoonist, and author, is probably best remembered as the founder and guiding inspiration of the ex-servicemen organisation known as the Memorable Order of Tin Hats.-Early life:...
as a brotherhood of front-line ex-soldiers. The ideal of the Order is to help fellow comrades in need, either financially or physically and to remember all servicemen who have answered the Sunset Call, both in war and peace time.

According to the Dictionary of South African Biography, one night in 1927 after he and the editor of The Natal Mercury, RJ Kingston Russell, had seen a war film, Charles Evenden
Charles Evenden
Charles Evenden, soldier, cartoonist, and author, is probably best remembered as the founder and guiding inspiration of the ex-servicemen organisation known as the Memorable Order of Tin Hats.-Early life:...
was persuaded to draw a cartoon on 'remembrance'. According to the Dictionary, "The cartoon showed a tin helmet surmounted by a burning candle. Around the flames of the candle were six words – True Comradeship – Mutual Help – Sound Memory".

However, the official MOTH website carries a cartoon captioned Forgetfulness and this led to the founding of the Order. This is confirmed by the Eastern Province Herald which describes the cartoon as follows: "a bullet- and shrapnel-riddled Allied helmet awash in the ocean. In the background a steamship passes over the horizon, leaving the forgotten, ghostly form of a veteran forlornly wading through the water."

The concepts of True Comradeship, Mutual Help and Sound Memory were to become the inspiration of a remarkable organisation of ex-front line soldiers, of all ranks, known as the Memorable Order of Tin Hats (MOTH). Evenden, as the founder of the movement and its guiding inspiration was given the title of 'Moth O' - a position he held until his death."

The membership of the MOTH movement, under Evenden's vigorous direction and leadership, grew into thousands. Men and women of two world wars, of the Second Anglo Boer War
Second Boer War
The Second Boer War was fought from 11 October 1899 until 31 May 1902 between the British Empire and the Afrikaans-speaking Dutch settlers of two independent Boer republics, the South African Republic and the Orange Free State...
(1899–1902) and even those of former enemy forces streamed into its ranks. All who were prepared to keep alive the memories of comradeship and self-sacrifice - the finer virtues that war brings forth - were welcomed and made at home in shell holes with colourful and meaningful names of war-time memories and occasions. The shellholes spread to the United Kingdom, Australia, New Zealand and to Rhodesia
Rhodesia
Rhodesia , officially the Republic of Rhodesia from 1970, was an unrecognised state located in southern Africa that existed between 1965 and 1979 following its Unilateral Declaration of Independence from the United Kingdom on 11 November 1965...
(Zimbabwe
Zimbabwe
Zimbabwe is a landlocked country located in the southern part of the African continent, between the Zambezi and Limpopo rivers. It is bordered by South Africa to the south, Botswana to the southwest, Zambia and a tip of Namibia to the northwest and Mozambique to the east. Zimbabwe has three...
). Membership was extended to those who had participated in the South African Border War
South African Border War
The South African Border War, commonly referred to as the Angolan Bush War in South Africa, was a conflict that took place from 1966 to 1989 in South-West Africa and Angola between South Africa and its allied forces on the one side and the Angolan government, South-West Africa People's...
http://www.moth.org.za/moth286.htm.

The MOTH national headquarters is situated in Warriors Gate, Durban
Durban
Durban is the largest city in the South African province of KwaZulu-Natal and the third largest city in South Africa. It forms part of the eThekwini metropolitan municipality. Durban is famous for being the busiest port in South Africa. It is also seen as one of the major centres of tourism...
, which is modelled on a Norman
Norman architecture
About|Romanesque architecture, primarily English|other buildings in Normandy|Architecture of Normandy.File:Durham Cathedral. Nave by James Valentine c.1890.jpg|thumb|200px|The nave of Durham Cathedral demonstrates the characteristic round arched style, though use of shallow pointed arches above the...
design from a photograph given to Evenden by Admiral Evans-of-the-Broke
Edward Evans, 1st Baron Mountevans
Admiral Edward Ratcliffe Garth Russell Evans, 1st Baron Mountevans, KCB, DSO , known as "Teddy" Evans, was a British naval officer and Antarctic explorer...
.

In 1948 Evenden opened Mount Memoryhttp://www.moth.org.za/moth8.htm,- a monument to the missing and dead of the Second World War, in the foothills of the Drakensberg
Drakensberg
The Drakensberg is the highest mountain range in Southern Africa, rising to in height. In Zulu, it is referred to as uKhahlamba , and in Sesotho as Maluti...
mountains.